The S.S. Construction Company is hitched to the high performance of Cat® machines. The company vouches for the pivotal role played by the Cat 320D and 320D2 in enhancing its business.

Surender Singh, Director, S.S. Construction Company, is emphatic about the machine's high performance and excellent productivity, "I call the Cat 320D excavator a wonder machine. You find several wonderful features in a single machine. The excavation of soft soil as well as rocks is possible due to its powerful engine and large bucket capacity. The machine is robust and highly durable due to its high resistance to wear and tear."

Established in 2005, S.S. Construction Company is a key player in the construction business in and around Lucknow. It is involved in canal digging, dam construction and road construction projects. The company has 400 employees deployed in various projects.

Their current projects include 50 km road construction on the Earch–Gursarai stretch and dam work at Kamahariya Ghat. They have also completed 25 kms of construction on the Sitapur – Baherich Road, 24 kms stretch on the Gorakhpur National Highway, 45 kms on the Lucknow Azamgarh road and canal excavation work at Haidergarh. 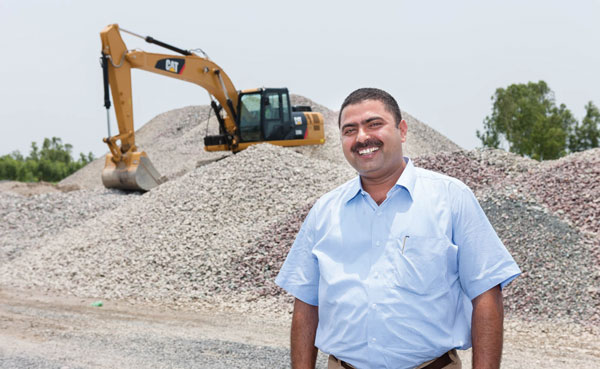 S.S. Construction Company owns a fleet of Cat machines, which play an integral part in their business. They started small and have added more machines over the years to meet the demands of their growing business. The breakup is as follows:

Singh remembers the time when he first saw the Cat excavator working in a canal excavation project in 2004. He was highly impressed by its exceptional performance and agility.

Currently the Cat 320D and Cat 320D2 excavators are deployed in the dam work at Kamhariya Ghat and the 7 metre road widening project on the Earch-Gursarai road. The machines are used for soft soil excavation.

He dismisses the comparatively higher fuel consumption as negligible, justifying, "Excavation and loading of soil is done in a single stroke, thereby saving on valuable time and effort. This directly affects the output, increasing it manifold. Therefore, the output per unit of fuel is far superior to other machines. Hence one needs to consider the fuel consumption, work output and time taken to complete a task in totality rather than in isolation. According to me, Cat excavator is a clear winner." 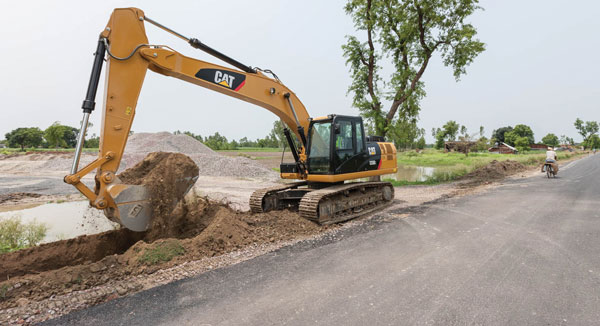 Singh is heavily dependent on the 320D and 320D2 for executing his projects. "Both, the Cat 320D and the Cat 320D2 machines are good. The enhanced bucket capacity of the 320D2 helps in completing a task in 8 hours, whereas the 320D with its comparatively smaller bucket capacity completes the same task in 10 hours. The lower maintenance cost of the D2 also makes it an attractive proposition."

Singh's operators work in 2 shifts. He says, "Operator feedback is good. The state-of-the-art cabin conditions provide a comfortable environment. This has enabled our operators to put in eight hours of work without feeling any strain."

Awareness of good after-sales-service is building up among customers. He says, "One of my chief criteria for selection of a machine is the after–sales service. To keep my machine output maximum, I need them to be in top condition at all times or else I would incur heavy losses. My market reputation would have diminished and this would have adversely affected my business. Hence I chose Cat excavators as they are robust and do not break down frequently. Even when they do, help is just a call away. The service engineers respond promptly and ensure that downtime is minimal. Spares are also easily available."

Periodic maintenance has a strong bearing on the life-span of a machine. Singh elaborates, "The Cat 320D and D2 excavators have a good return on investment. No losses have been incurred. They are extremely reliable. Non-fuel operating costs incurred are negligible. Machines need to be cleaned and checked periodically. This keeps them in peak working condition and increases output. This also increases the lifespan of the machine. Our Cat excavators are 5-6 years old but look brand new."

Singh recalls the crucial role played by the Cat 320D excavators during the 2012 floods, "Cat machines have always proved reliable, working non-stop even under extreme conditions. In the 2012 monsoons, when the Gomati River flooded heavily, bringing about mass destruction to life and property, the government took immediate action and a large number of excavators were deployed to build bunds and stop the floods. Among many machines that started work, only Cat machines were successful in lifting mud and making the bunds. The other machines got stuck and broke down."

Singh places full faith and confidence in the Cat 320D and 320D2 excavators and is a very satisfied customer. This is why he trusts the Caterpillar brand to meet his growing business needs.