India has a very long coastline and is blessed with large number of rivers and lakes so for the development of these areas, there is a need for such a machine that can work in marsh land, poor soil and water. The quest for such solution that fills this gap and provides solid and robust designed, and extensively serviceable machine, brings forth to AmphiMaster excavator.

According to Mr. Rajiv Mehta, Managing Director, ACE Infrastructure, "the concept was to have such a machine that can be self-propelled in water and on land and in marsh conditions, using a standard hydraulic excavator existing or new to reduce capital cost and be easily serviceable, have a long reach to be really effective. We have already, sold 3 units, one unit of AmphiMasterAM 350 and two units of AM210 in India and also planing to have a small fleet available for long and short-term lease." 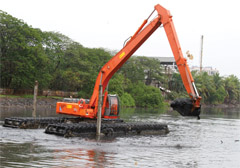 AmphiMasterAM is suitable for the applications where other excavators or dredgers will not work at all. Speaking on its advantages, Mr. Mehta said that it is roughly 50% cheaper than a similar size dedicated dredger on the capital side and on the operation side, the productivity cost is simply very low as compared to standard operating practice where the AmphiMaster outshines itself by especially carrying out job in swampy area versus standard excavator. For standard excavator to work in swamp, one needs to either lay steel plate or logs in the soft ground in order for the excavator to track. It is expensive and time consuming and incurs plenty of extra resources.

Shedding lights on its noticeable features, he elaborated that the design of AmphiMaster is based on extensive R&D and field trials after which the final design has been arrived at, the design incorporates technologies which are designed to make the customer experience of owning and operating a pleasure. The design is validated on modern designed software for stress and balance. It goes to work where other excavator fears to tread because it can float hence it does not fear to tread in very poor soil or water. It has very low ground pressure and heavy duty track chain designed to ensure it can extricate itself without breaking a track. In addition, the synchronous quad drives system (patent pending) gives unparalleled traction power with speed.

He further said, from safety point of view, we have incorporated many features on the unit, including individual isolated chambers which enhance structural stability even if a floatation cell is partially damaged. Buoyancy is calculated to lend full floatation as a safety feature whereas structure is balanced to minimize tipping possibility. Other features include specially designed long reach to provide least tipping, synchronous quad drive system to balance the system, the machine is welded using robotic welding for weld integrity, provision of hydraulic spuds to ensure stability, provision of life jackets in event of operator having to bail out, optional walk around railings with guard rails and last but not the least operator training in proper usage of the AmphiMaster.