In its quest to expand the ambit of its business across the globe, Universal Construction Machinery and Equipment Limited, has chalked out multipronged strategies including providing innovative product and services to its customers both within and outside the country. 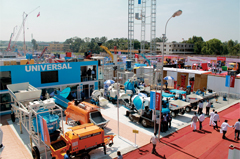 In the recently held trade event Excon-2013, it has showcased the much sought after products like On-wheel Batching Plant upto 60 cum, Transit Mixer, and Self Loading Concrete Mixer which have been developed by the in-house research and development team saving foreign currency and custom duty levied on the import of such high tech products. This new and innovative Self Loading Concrete Mixer is available in capacities of 2 and 4 Cu.M Per Batch and is most suitable for projects which require constant shifting of machines like Canal Lining, Road Dividers, Windmill and Irrigation projects. The Machine is capable of self loading aggregates, batch mix, transport and discharge the concrete at specific locations.

Strengthening its brand leadership further, Universal has diversified and expanded its product portfolio with new range of Vertical Man & Material Handling Equipment. Through its offerings of Universal-Uster flattop tower cranes, see-saw passenger and material lifting hoists and mast climbers, the company has positioned itself as a total materials handling solutions provider for building construction. Uster cranes sold by Universal are of 5 tons @ 12.5 metres working radius and 1 ton at tip load with a jib of 55 metres.

Adding luster to the range of products, it has most recently forayed into Rock Breaker. As a part of company's expansion plan, Universal will also enter into the Earth Compacting equipment business very shortly.

As a startup, the Universal Construction Machinery and Equipment had started its operations in a make shift shed in 1980s through block making machines by Chairman Mr. Rohidas More. The company, spanning over three decades has emerged as India's one of the biggest construction equipment companies under the leadership of Vice Chairman Mr. Ranjit More and the Director Abhijeet More with their foresight and innovative strategies like the five-year plans and product innovations and diversification into equipment manufacturing business. The business solely owned by More family with Global dreams on anvil, has now embraced corporate governance with 10 independent directors making it a closely held limited company. Currently, the company has more than 50 products in its portfolio with four verticals catering to mechanization, concreting, materials handling and process. In view of huge future business avenues in the infrastructure segment, it is now ready for the next level of growth and has chalked out a seven-year plan including expanding product portfolio, adding new verticals, and forging new technologies tie ups. 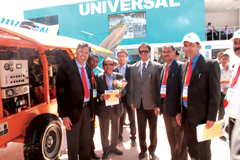 Moreover, Universal has fast-tracked its operations with the opening of its first of its kind Research and Development Center recognized by Government of India. The purpose behind setting up an R&D center is to develop new products, up-gradation of existing ones, developing import substitutes based on Indian Conditions, Localizing products for International Markets and constantly improving manufacturing process in the state-of-the-art facility being managed by the highly talented team of 22 engineers and 8 technicians. The company has targeted to roll out at least five products every year thereby further intensifying competition in the international equipment market. 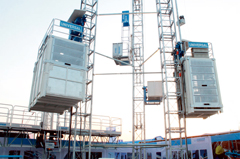 Disclosing his future plan of action, Vice Chairman, Mr. Ranjit More said that with the coming up of the new R&D Center, the company is rolling out GenNext products with more efficiency which include multi-location machines with centrally controlled and more technologically advanced and user friendly products. The upgradation of existing products will be on the agenda which will include improving efficiency and equipment performance entailing minimum cost, Fuel-efficiency, Energy Consumption and performance thereby increasing the overall output. Strengthening manufacturing process would include improving and streamlining process layout, machine orientation, materials movement and machine shop thereby upgrading the entire range of value engineering.

Commenting on the current scenario, CEO, Mr. K. Sunil Kumar says that Universal has taken a Quantum jump recently by installing seven robots at its Shivare plant to manufacture products with precision and consistent quality and to expand the plant capacity multifold. Operator training has been the core activity with Universal Knowledge Center along with Construction Industrial Development Council (CIDC) has instituted a special training Centre at its Shivare Plant near Pune. Universal has put in place a decisive marketing and distribution policy with the largest Sales and after sales service network at more than 75 locations across the country. There are also 6 regional offices in Delhi, Calcutta, Mumbai, Bangalore, Pune and Nagpur along with an International distribution tie-up with Tata International. Universal has come up with a unique triple retail platform which includes Universal Exclusive Stores, Signature Stores and Constores. In the first phase, Universal already has 16 exclusive stores covering areas like Srinagar, Rudrapur, Nagpur, Surat, Coimbatore, Hyderabad, Bangalore, and Bhubaneshwar with an idea to display products as per the requirements of the customers.