The Big Boom Pumps from Putzmeister 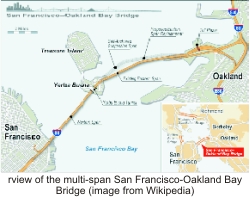 Three large PM truck-mounted concrete pump - with the new M 70-5 leading the way - were on site at the same time recently, as the "Oakland Touchdown," the eastern approach of the new Bay Bridge in San Francisco Bay, was concreted.

The extensive pumping work was contracted to Associated Concrete Pumping, a concrete pumping company based in Sacramento, who are a long standing partner of Putzmeister and the first customer to order the BSS 70-5.16 H large-boom truck-mounted concrete pump. To make it possible to continuously concrete the massive area of the bridge-approach superstructures using a wet-on-wet laying process, Associated Concrete Pumping also placed a BSF 58-4.16 H and a BSF 63-5.16 H from its fleet alongside the truck-mounted concrete pump.

The San Francisco Bay Bridge basically consists of one 3.1 km long western and one 3.2 km long eastern bridge construction, connected near the bay’s midpoint by an island tunnel. The eastern span of the bridge, a double-decker truss suspension bridge built in 1936, will soon be replaced by a new bridge. The "Oakland Touchdown," at its eastern end, is where it reaches the California mainland.

The new East Bay Bridge is being built slightly to the north of the old bridge. Instead of a double-decker cross section, it will have two parallel superstructures, one to hold each of the two 24 m carriageways (carrying five lanes in each direction) with hard shoulders, and also a path for cyclists and pedestrians.

The customer for the $6.2 billion project (some €4.92 billion) is the California Department of Transportation, with some of the financing set to come from toll revenues. The tender for the "Oakland Touchdown" part of the bridge was won by Californian construction company MCM Construction, with a bid of $178 million (some €139 million). All work on the bridge is expected to be finished by 2012. 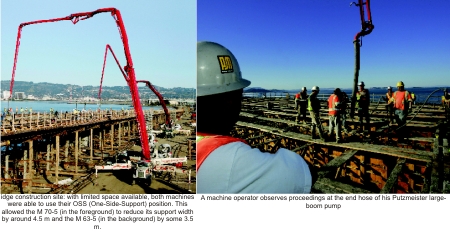