One of the first companies ventured into the concrete equipment business in India, which is a 100% subsidiary of SCHWING GmbH, Germany, 75. It is a year old, 850 million euro concreting equipment manufacturer headquartered in Herne, Germany.  SCHWING Group has 12 manufacturing units worldwide and has a global presence in more than 145 countries. SCHWING Stetter India was registered as an Indian company in June 1998 and started its operation in the beginning of 1999 in a leased premises.  In 2001, SCHWING Stetter India set up its own manufacturing facility at Sriperumbudur in Chennai, followed by the second facility in 2004, exclusively to manufacture truck mixers.  In December 2006, the company inaugurated its third facility to exclusively manufacture concrete batching plants.

Previously, the Indian concrete equipment sector was highly fragmented, with many proprietary concerns in the unorganized sector. However, with the entry of organized players / MNCs like SSIPL, the sector has seen a lot of streamlining and development. As an equipment manufacturer, SCHWING Stetter India has always been a frontrunner in extending vital support to India’s infrastructure sector. The company manufactures the entire range of concreting equipments like batching plants for concrete preparation, transit mixers for concrete transportation, concrete pumps for concrete placement, shotcreting plants and recycling plants for recycling of concrete. The equipments manufactured are complimentary to each other.

SCHWING Stetter always try to understand the needs of the customers properly and they offer products and solutions matching their requirements. SCHWING Stetter is known world over, for introducing technological innovations and adding value in the products. 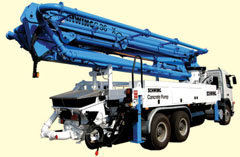 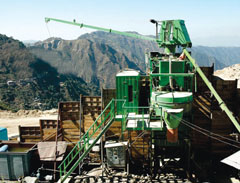 R&D is a very critical function in the construction equipment sector and the manufacturer needs to have a clear understanding of what customer needs, especially when the machines are very expensive. The Schwing group’s R&D division is headquartered in Germany, and works closely with the design departments of group companies worldwide. SCHWING Stetter strives to ensure that all its products meet the highest possible quality standards, and made available to its customers in the most cost-efficient manner. The company uses the latest technology and design in its products, adding value to the products deployed for various road & bridge projects, across the country. The state-of-the-art technology in SSIPL’s products also ensures that the projects are completed in the quickest possible time, in the most efficient manner.

SCHWING Stetter GmbH has adopted the theme go green, which is being reflected in all its initiatives. As a market leader, the company has assumed the responsibility to adopt certain practices that will work to create a healthier and sustainable environment. Keeping this in view, the company has incorporated certain green features to its products. The motto go green has a challenging undertone, intended to motivate people, both inside and outside the company to get involved. SCHWING GmBH has taken considerable measures to reduce CO2 emissions by 100 tonnes annually, for instance. It is known to offer products that are extremely energy-efficient, thereby resulting in lesser fuel consumption. This implies that the go green initiative is also supported and practiced by its customers, combined with the pleasant effect of saving operating costs and expenses due to wear and tear.

Parbati Hydroelectric Project
SCHWING Stetter is recognized internationally for its world record it set, in pumping concrete vertically up to a record height of 715 meters for the Parbati Hydro-electric project in Suind village, Himachal Pradesh. The project is being implemented by the National Hydro-electric Corporation. The Parbati Hydroelectric Project Stage-II is a run-of-the-river scheme, proposed to harness hydro potential of the lower reaches of the river Parbati. SCHWING Stetter India supplied BP 4000 super concrete pumps to Gammon India, which is executing the project for pumping concrete from bottom of the tunnel to the top which has a total length of 1500 meters and an inclination of 30Ú.

The Bandra-Worli Sealink Project was successfully executed by HCC. However, they faced a major challenge in pumping the concrete for this project. When HCC started the project, they had the responsibility of pumping 95,000 cubic metre concrete out of a total concrete of 2,25,000, which is of highest grade (M60). Since the concrete had to be pumped into the sea, it had to withstand severe corrosion by sea water, and also withstand challenges of nature temperature difference, high tide, cyclone, etc. The concrete specified had a particular design, which included micro silica. Besides, a huge volume of concrete had to be pumped in one go.  The concrete-setting time had to be delayed to ensure that there was no cold joint in the concrete. The project authority and the consultant had suggested sikka 1 and super plasticizer - BASF admixture for retarding the setting time.

In March / April, 2003, HCC faced considerable difficulty in pumping the concrete, at a distance of 174 metres, horizontally. At that point of time, they used SCHWING’s BP 1800 Concrete Pump Model to execute this task. When they started doint it, the pumping was too slow and SSIPL suggested that the concrete specification be checked and modified for pumpability. SSIPL arranged the visit of Mr. Karl Ernst V. Eckardstein, the author of the internationally renowned book, Pumping Concrete, and Mr. Andreas Godowski, the practical pumping engineer, to come to the project site. They interacted with Mr. Robert Allen and others and explained to the customer, how certain changes could be made to the product specifications resulting in concrete pumpability, without affecting the strength of the concrete itself. The customer discussed this suggestion with THAR, a UK-based consultancy firm who were involved in the project, and SCHWING’s suggestion was accepted. Once the decision was made, in May 2003, a BP 1800 concrete pump, with a pipeline of 175 metres was laid and concrete pumping began there and than. The resulting smooth pumping proved that concrete pumpability had been the issue, thereby reinforcing SCHWING’s original reading of the situation. The customer was able to comprehend the situation in its entirety and went on to purchase another 5 BP 1800 concrete pumps from SCHWING and began the concreting process very comfortably for the project.

The next challenge confronted when the customer initiated a vertical pumping operation on Pier 19, which had a horizontal distance of more than 300 metres and a height of 132 metres. This was successfully overcome when SCHWING’s concrete pump model, BP 3500 was deployed with the aid of a separate placing boom model, DVMK 42.