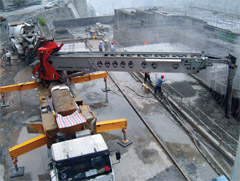 At the Jinsha River - a tributary of the Yangtze - the Xiluodu hydro-electric plant is currently being built with a purpose to generate electricity. At the same time, the plant will also fulfil other tasks like protection, from flod deposition of sediment, improvement in shipping conditions, and so on. It is expected that it would produce 57 to 64 billion kilowatt hours of energy every year, making the plant the third largest hydro-electric plant in the world.

A double-curved arch dam should dam up a storage lake of 12.67 billion m3. The absolute elevation of the dam crest is 610 m, the maximum height of the dam is 278 m and the overall length is 700 m. The total excavated material for this project amounts to 39.81 million m3 of which 25.61 million m3 is above-ground excavation and 14.20 million m3 is from the construction of tunnels. In total, 16.72 million m3 of concrete is required for this project and 6.60 million m3 of this is required just for the body of the wall. The concreting work started in 2008. It is expected that the first generator set will be installed in June 2012 and hopefully it would start generating energy from June 2013 and the entire project would be completed by 2015. The total capital of $7.36 billion has been invested so far in the Xiluodu hydro-electric plant.

The devices in the Xiluodu dam that are planned for flood water flow include seven overflow drainage openings at a size of 12.5 m x 13.5 m, below them eight outlets at a size of 6 m x 6.7 m and four exceptionally large overflow tunnels (with a diameter of up to 15 m) – two tunnels on the right embankment and two more on the left. The overflow capacity of the project amounts up to 49,923 m3/s. The power which is generated by the overflow is almost 100 million kilowatts and is therefore the highest in the world. The four overflow tunnels are the largest of their kind in the world and have a discharge rate of 16,000 m3/s, which is about a third of the entire outlet capacity of the plant.

These numbers are not just attributed to the size of the tunnel but also to the flow rate of the river, which is amongst the fastest in the world (up to 50 m/s). Since these four overflow tunnels were designed to cope with exceptionally large quantities of water at an extremely high flow rate, the concrete that is used here must be of outstanding quality. The difference between this concrete and a pumpable concrete mix lies mainly in the proportions of the individual concrete raw materials that are used. Pumpable concrete requires a relatively high flowability so that it can flow through the delivery line. This means that concrete raw materials such as cement and flyash are required in large quantities. However, cement creates a lot of hydration heat when setting the concrete, it means that the temperature and crack formations are difficult to control. The dissipation of the hydration heat may pose a problem, particularly with structures such as a dam.

Telebelt comes out ahead

Telebelt is a mobile belt conveyor that can continuously convey any kind of bulk materials and concrete and is unrestricted by the pumpability of the concrete. Telebelt is therefore the perfect solution for pouring high-quality mass concrete as it not only lessens cracks but also reduces the cost of the concrete.

The first Telebelt TB 105 delivered by Putzmeister has been used in the Three Gorges Dam project since 2000. To date, the number of operating hours is over 20,000 and the device continues to work properly - clear proof of the robustness and reliability of the Telebelt. Due to this experience, the company responsible for the Three Gorges project ordered two more Telebelts of the new type TB 110G for the team from SinoHydro Bureau 7. Since the machines are very convenient to operate and the boom can be gently and smoothly telescoped, swung, lifted and lowered, the two TB 110G devices are very popular on the construction site. The machine has evoked a positive response among the workers from SinoHydro Bureau 7: Concrete pouring has become child's play. However, if we look at the quantity of concrete that the Telebelt must continuously pour for each concreting - more than 1,000 m3 of concrete - it becomes clear just how hard the work is for the workers on the construction site.

Telebelt is in great demand across power plant construction site


The Xiluodu hydro-electric plant is a huge construction site. Several projects are going on simultan - eously and these are co-ordinated centrally. The individual construction teams work closely together. It is often the case that immediately after the concreting task is finished, the belt conveyor travels to the next site of the construction site. Due to high level of flexibility and mobility, the Telebelt is often used "on the front line". The TB 110G from Putzmeister was therefore not only used on the construction sites of SinoHydro Bureau 7 (in other words, to construct the overflow tunnels, the foundations of the cable crane structure and for above-ground concreting, etc.), but it also considerably helped the construction sites of Hydro Bureau 6 and Hydro Bureau14 (among others) when constructing the surge tank, the underwater outlet, the main transformer building etc. As a result, on one occasion, the Telebelt was used at five different construction sites within six days, during which it continuously placed 4,800 m3 of concrete for the overflow tunnel, the cable crane platform and the underwater outlet. The high level of efficiency demonstrated by the belt conveyor is another performance feature that is recognised on the construction site. For example, the TB 110G generally requires only 2.5 minutes to drain a mixer of 6 m3 for the work on the cable crane platform and, at a slightly higher speed, it requires only 1.8 minutes to drain the mixer. This extremely high machine output significantly contributes to completing the work within the scheduled time.

The longest river in Asia with the changing name

The 6,300 km long Chang Jiang (also known as the Yangtze - the "Long River") is the longest river in Asia and, after the Nile and the Amazon, is the third-longest river in the world. It originates as the Dri Chu (Tibetan "river of the female yak") from the Ganjajubu glacier at an altitude of 5,405 m and continues under the name of Jinsha Jiang - "Gold Sands River" - from north to south along the entire border between Sichuan and Tibet. In the Hengduan Mountains, it crosses the border between Sichuan and Yunnan. From the city of Shuifu, it flows under the name of Yangtze until it reaches the East China Sea to the north of Shanghai.

The dam should reduce sludge load

In the Red Basin, the Yangtze is fed by numerous tributaries that drain, for example, the eastern slopes of the Tibetan highlands. The tributaries feed the Yangtze with large quantities of sand, silt and clay - an annual quantity of approximately 680 million tons, which is as much as the Nile, the Mississippi and the Amazon together! This makes the "Long River" one of the most sediment-rich rivers in the world. Where it is damed - like at the huge Three Gorges Dam - the flow velocity of the water slowes down, sediment is stored in the reservoir and gradually silts up. The Xiluodu dam should counteract this. It is expected that the dam should reduce the quantity of sludge in the Yangtze by a third. 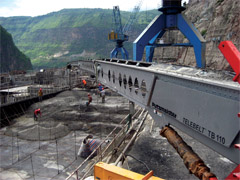 In valleys that are very high and narrow, the preferred dam to build is the arch dam. The wall forms a vertically and horizontally tensioned arch towards the side of the water. Due to the arch-shaped design that is directed against the flow of the river, the mass of water is distributed over a larger surface area and therefore puts less stress on each unit of area. Significantly, fewer materials are required to construct these dams that are required for other types of dams. However, the water pressure is diverted over the arch to the foundations in the mountain at the side. The attachment to the rock is therefore particularly important with this wall design.