Insightful tests were successfully completed in the Korean capital Seoul. With the support of a local pump operator and the Putzmeister subsidiary PM Korea, ultra high strength concrete (UHSC) was conveyed using a BSA 14000 HP-D stationary high pressure concrete pump, and all relevant measuring data was recorded and analysed.

Translation: "Pump test with ultra high strength concrete (200 MPa)"
In collaboration with the cement industry, one of the leading Korean steel construction companies has developed an ultra high strength concrete with a compressive strength of 200 N/mm2 (200 MPa), which is to be first used in Korean construction sites. Similar to the European Union regulations on processing concrete above the property class C100/115 as defined in DIN-EN 206-1, whereby approval or agreement in each case is required from the building authorities, a special approval procedure must also be followed in Korea when this building material is used. Korea plans to use this UHSC in the near future for a particularly ambitious bridge project and special construction purposes. UHSC is also known as "powder concrete" or "Reactive Powder Concrete" (RPC).

Since the compositions used to make UHSC are treated confidentially by manufacturers' (not only in Korea), only general information can be given here. For instance, the test in a new city area near Seoul involves concreting narrow support columns for a building construction project that will significantly increase useable floor area for rent. The pumping range using delivery pipes in Putzmeister ZX quality was approximately 90 m. BSA 14000 HP D high pressure pumps were provided by Putzmeister customer Sam - Ham, whose equipment includes a further five large PM stationary pumps. 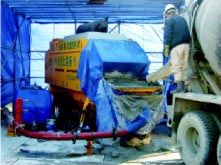 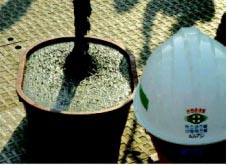 
With a resistance to pressure that is eight times higher than concrete of property class C25/30, UHSC offers entirely new possibilities in the field of engineering. Its higher rigidity means that concrete structures can be significantly lighter and filiform while also highly stable and lasting. If UHSC is also reinforced with fibres, constructional elements also have considerable tensile and bending strength and do not generally require reinforcement even when used for bridge building. When UHSC is used, the dead load of loadbearing structures is also approx. 30 to 50% less than other concrete mixtures which are used. These properties are particularly advantageous for highly - tensioned bridges, highrise buildings above existing construction heights and heavily - loaded, narrow supports.