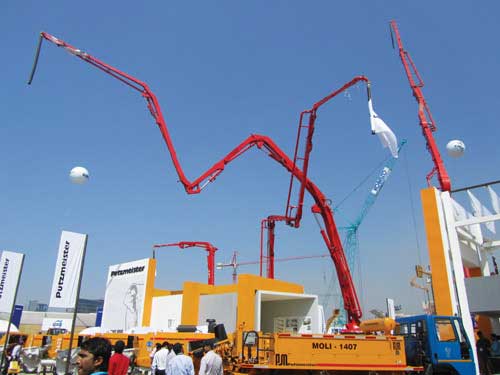 Putzmeister GmbH, Germany, a leader and global supplier of Concrete Pumps, Tunneling Machines, Industrial Pumps and Mortar Machines made a notable present at bC India. Mentioning about their presence in India on the sidelines of the show, Mr Michael Schmid – Lindenmayer, MD said, ‘Putzmeister has its state-of the-art manufacturing plant in Goa which is spread over 100,000 sq m. Also we have a countrywide sales and service network with regional offices all over the country. Our company is committed to bring latest Technology to India and believe in Best Products, Best Quality & Best Service.’

Commenting on their products Mr. Lindenmayer stated, Putzmeister pumps have been deployed at various prestigious projects and are the first choice of real estate and infrastructure companies across India. Our company is the champion in highrise pumping and major projects worldwide are executed with our equipment. Putzmeister has the Largest Truck mounted concrete Pump in the World – M 70. In the prestigious project of Burj Khalifa Tower in Dubai, Putzmeister has broken again its own World record by achieving a pumping height of over 606 m. Last year our BSA 1407 D made history by pumping concrete up to a distance of 800 m at the Delhi Metro Tunnel site, he added.

He said further, our company has been very active in introducing new technology and products to this strong growing market. It has implemented new models for customers which are very simple to operate and very cost competitive at the same time. Among the latest introduction is Stationary Concrete Pump BSA702D, designed for 20 cubic m/h and can be delivered by a reversible drum mixer. Other in line is BSF20.07, a very price competitive and an ideal starter boom placer for road contractors and RMC companies which are still not capable enough of investing in a bigger boom placer.

As far as the high end products are concerned, Putzmeister has introduced the BSA1409D based on free flow hydraulics for customer who requires a higher output. In addition, BSA1408HD, a high pressure pump which can pump building with a height of 200 to 250 m was presented. This model accomplishes to be the industry standard for buildings of these heights. And in order to place the concrete on top of the building Putzmeister has introduced stationary boom systems called MX in combination with the pipelines, valve system, cleaning stations, and accessories.

The Indian arm of Putzmeister is also exporting its products to Srilanka, Bangladesh, S. Africa and South East Asia. In 2010, Putzmeister in India has grown by 160% and has further increased its market share in all product categories.