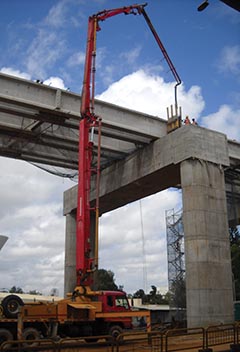 The Bangalore Metro Rail Project which is named as ‘Namma Metro’ is being carrying out by Bangalore Metro Rail Corporation Ltd (BMRCL), a joint venture between Govt. of India and Govt. of Karnataka. The construction of phase 1 with a total length of 42.30kms wherein the elevated section is of 33.48 km and the underground section is of 8.82km comprising 40 stations was started in 2009 with an estimated cost of Rs.11,609 crore, is now operating successfully.

BMRCL has selected and awarded this project to the country’s best contractors based on their expertise in building of elevated structure, railway station, rail tracking construction, and the underground tunnel construction. The project contractors have chosen and used boom pumps mostly from Putzmeister for faster and convenient placing of concrete.


For instance, L&T’s infra and B&F (Building & Factory) divisions have used Putzmeister Boom Pump Model BSF36.09 for pre-casting and concreting piers & piers caps while working at 5.1 km R-3A Elevated structure and also for placing concrete at 3 level and for different structure during the construction of 3 stations each in R-3A and R-4. All locations of station are highly congested due to traffic and hence placing concrete was a big challenge.

L&T, P&M - Head Mr. Lokesh and Mr. Rajesh are extremely satisfied with the performance of the machine in completing their project as per stipulated time. They have also appreciated the service support extended during concreting even at night. 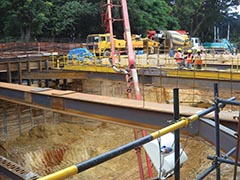 Besides, CEC is also working on underground tunnel project of 4.9 km and till now has completed almost 3km by using Putzmeister BSF36.09H & BSF32.09H boom pumps for placing concrete at tunnel opening, pathways, sidewall construction etc. The company is also working on 4 underground stations in East-West line using these pumps.

COASTAL PROJECT, another contractor of BMRCL project has also used Putzmeister Pump BSF 36.09H at its project site as the company is working on underground tunnel project of 4.0 km. They are constructing 3 underground stations in North-South line and are using this boom pump for concrete placing in tunnel opening, pathways, sidewall construction etc.