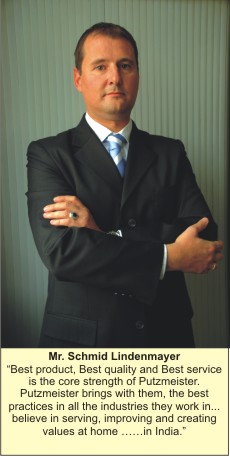 “Best product, Best quality and Best service is the core strength of Putzmeister. Putzmeister brings with them, the best practices in all the industries they work in... believe in serving, improving and creating values at home ……in India.”

Putzmeister Concrete Machines Pvt.Ltd. - a 100% subsidiary of Putzmeister Concrete Pumps GmbH, and the global supplier of concrete pumps, tunnel machines, industrial pumps and mortar machines, has always been pro-active in bringing its latest technology to India. Keeping up the tradition, Putzmeister recently introduced an upgraded version of their most popular stationary concrete pump model BSA1404D. “This upgraded version BSA1404HD is a high pressure pump that caters to concrete pumping to 80~100m building heights. This pump has smaller towing length for better manoeuvrability in narrow areas – thus are most suitable for RMC pumping contractors and infrastructure companies,” said Putzmeister’s Managing Director Mr. Schmid Lindenmayer.

Apart from providing the benefit of better fuel economy, the pump is available in various drive options of Kirloskar, Simpson, Deutz as well as electric versions, giving its customers an option to select their choice.

“Putzmeister being one of the pioneers in research and development of concrete pumping technology, has always strived hard to give the best and the latest to the world. Why should India be deprived of latest technology which is proven all over the world,” questioned Mr. Schmid-Lindenmayer. Adding to this, he said that “PM is known for ‘better value for money.’ All Putzmeister pumps have lower operating and maintenance costs. The newly introduced stationary pump further lowers the impact of concrete on its wear parts – thus giving 50~80% more life.”

“Today customers are looking for products with latest technology and lower maintenance costs. All our pumps, stationary or boom, are equipped with the latest S-valve technology which is much superior to other contemporary technologies being used. The S-valve technology prevents frequent breakdowns giving uninterrupted flow of work, unlike pumps using any other technology” highlighted the MD.

Putzmeister has rigorously worked for more than a year, based on various parameters like concrete quality, operating conditions and space availability to provide a product ideally suited for the Indian market. This pump has superior high filling efficiency of 90~95% of concrete inside the cylinder and gives excellent concrete output (practical) in its class of concrete pumps. 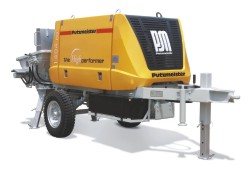 Putzmeister has its state-of-the-art manufacturing facility based in Goa. The Indian plant is spread across 100,000 sq.m. area in Verna Industrial Estate in Goa. The company has established its network all over the country and has spread its presence in cities viz. Delhi, Jamnagar, Mumbai, Goa, Bangalore, Chennai, Hyderabad, Kolkata, Lucknow, Cuttack, Chandigarh, Jammu, Pune. In addition to India, Putzmeister also has production facilities in Germany, US, China, Turkey, France, Spain, Italy, Japan, UK, South Africa & South Korea.

In a short span of time, Putzmeister has become a leader in boom pump market and targeting to do the same in stationary pump business. Putzmeister pumps have been deployed at various prestigious projects like Metro where one of their model BSA1407D pumped concrete upto 800m distance.

“Our Service teams not only have a comprehensive know-how of concrete pumps but they are also trained to possess a strong application knowledge. This is the benefit of a company like Putzmeister that is dedicated to concrete pumps,” said Mr. Schmid-Lindenmayer.

About the USP of Putzmeister, Mr.Schmid-Lindenmayer said, “Best product, Best quality and Best service is the core strength of Putzmeister. Putzmeister bring with them, the best practices in all the industries they work in. They strongly believes in Serving, Improving and Creating Values at home ……in India.”