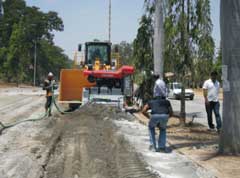 BRDC boasts of the highly efficient Asphalt Zipper which is manufactured in the state of art facility in Utah (USA) with the latest laser welding and robotics, making it a fully American company. The first Asphalt Zipper model was launched in India at the EXCON 2011 show in Benagaluru.This equipment has since then proved its mettle over at least at four successful operations and trials over a period of six months. The Asphalt Zipper is simple, rugged and “highly portable” equipment capable of performing multiple tasks such as Pothole Patch repairs, Milling off Bituminous layers for RAP recycling, Pavement dismantling for (F.D.R) Full Depth Reclamation as well Soil Stabilization for asphalt pavement projects at 300 mm depths.

The Zipper is available in widths of 0.2 mtr (8”) to 2.4 mtr(94”) sizes such that the host vehicle can be as compact as a Skid Steer, while there are models to suit the commonly available like JCB 3DX (Backhoe Loaders) for such works. Zipper does not only offer a very high return on investments as a Milling Machine but also the application of FDR and Soil Stabilization makes it a sure winner when compared to production and operations costs of conventional and higher end machines.

The results from the Zipper have been consistent in “churning” the additives, new aggregates, fines etc; at desired pace and variable depths upto 300 mm in single pass with full control by the Host-vehicle operator or the wireless remote making the job easier. The result is a thoroughly mixed (homogenous) mix best suited for easy grading and roller compaction. 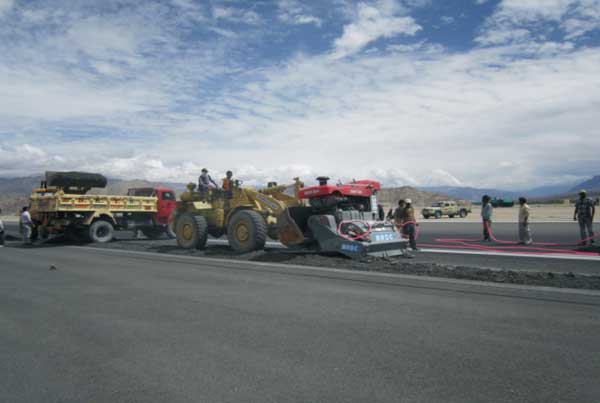 Applications of the Zipper are not restricted to this but reach more avenues of Mining being launched shortly for coal and limestone. The major advantage is the easy mobilization, which happens in a matter of minutes without any cranes or trailers. The controls are simple and easy. Minimal crew requirement also makes the operations cost-effective. Cummins and John Deer powered diesel engines options are offered on models with customization of Cutting Drums and varieties available to suit Standard, Fine Milling and Z-Mag for stubborn asphalt ensure that most applications are accommodated. Field trials at least two locations in Bengaluru have resulted in excellent stability of the newly constructed pavement with reduced thickness of BC layers while withstanding traffic abuse without any signs of distress.

In September last year, the Zipper was put to a rigorous test by the M.E.S. at the Leh Airport Runway Asphalt Miling at Ladakh. This happened when attempts to mobilize conventional milling machines failed to meet the limited requirements of the project. At an altitude where the hardships compound exponentially, the Zipper was an absolute success. Once the Zipper was selected by the Military Engineering Services (MES), the agency was left spellbound by the pace and accuracy of work. During recent trials with a local contractor near Mahape, Navi Mumbai Municipal Corporation (NMMC), excellent results were obtained when milled depths varied from 75 mm to 250 mm. The Zipper has also performed soil stabilization when it was used by renowned admixture manufacturers for trials and work execution. This was the second application wherein the Zipper proved its mettle worth every paise.

Recently, at the 2012 Australian Mining Exhibit, the Zip-Miner was launched and registered the most rapid sales of 4 units in less than a month. The order book has not stopped since then. In India, what remains to be done is the demonstration of application on Lime-Stone Surface Mining and Coal Mining and similar applications of gypsum, laterite, salt etc.

More applications in the near future for National Highways are in the pipeline which would then ensure that the Zipper is recognized as a vital equipment for Indian contractors. As for consultants, they would look more closely at options best suited for their clients’ projects covering aspects of mobilization, internal site travel and ease of operation with ownership costs at a fraction of that spent on larger machines with almost similar output. Additional details about this equipment and application videos are available on the company website www.asphaltzipper.com and in India the Asphalt Zipper is represented by BRDC at www.brdc.co