After the agreement was inked on September 2012, a team from Bhai went to KYC Nishiwaki factory, Japan to gain technical knowledge and hands-on manufacturing experience. Back in India, the stage was set to manufacture this technological marvel. It took a year and multiple visits from the Japanese team to perfect the mixer. With high Japanese quality and standards, the first mixer was ready by the last quarter of 2013.

Bhai displayed the first prototype - a 30 CuM/Hr twin shaft mixer for the first time at Excon 2013 in Bangalore. The technology and marvel of the mixer got appreciation from every major construction equipment company of India. It was equally accepted with enthusiasm from the construction industry. 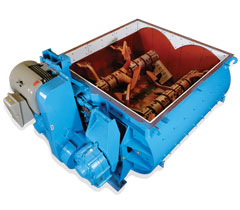 By the beginning of 2014, the new mixer got acceptance in the construction industry and momentum by third quarter of 2014. The mixer is running at multiple locations in Punjab and Delhi NCR. Many of the customers also prefer to change their old mixer with the new one. When asked about their new twin shaft mixer, one of the customers of Bhai (amongst top 10 construction companies of Delhi NCR) said, "This is a technological wonder. We are very much happy with this new mixer. All the issues we had with our old Chinese twin shaft mixer are gone now. Our batching plant is running as new again. We have not only saved money but also increased the life of our plant."

With this new mixer, Bhai Pumpcrete has also revived its product line and is now offering the best in class concrete batching plant to the construction industry. This is the beginning of a new era of technology which will further the construction of world class structures.