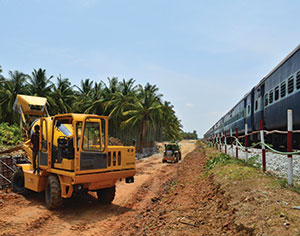 Ajax-Fiori has always provided solutions for the constraints faced in concrete equipment industry. Its Self-Loading Concrete Mixer (SLCM) has revolutionized the way concreting is carried out at site. Unlike Ready-Mix Concrete (RMC), SLCM produces and delivers fresh concrete in a short span of time. For railway works, it is very essential that the fresh concrete is produced at the site and placed at the earliest, without any loss in the quality of the concrete, SLCM’s are feasible for these works.

Under the South-Western Railway department, a new doubling project for Tumkuru - Arsikere (103 kms in Karnataka) stretch was tendered and the project commenced in 2016, Tumkuru - Arsikere stretch is a high-density route but the existing single line track is highly saturated and additional services cannot be operated, hence, doubling of track was necessary.

The entire stretch was divided into two: Tumkuru - Ammasandra & Ammasandra – Arsikere was awarded to M/s Krishi-Infratech, the company is well-known for railway projects since a couple of decades. Major works in the project were cutting and filling of acquired land for doubling, construction of major & minor bridges, retaining walls and blanketing of formation. The project involved construction of major bridges of span more than 15m in different types of soils, which was engineered skillfully, cutting and filling of earth to form an extended platform for doubling of lane, and involved proper planning and execution. Retaining walls were to be constructed to provide resistance to lateral pressure exerted by the soil and act like a casing for the soil to avoid external spillage. Krishi-Infratech has expertise in handling railway projects, with an experienced and efficient design team for planning and execution. The quality of work they deliver has made the company bag many railway contracts in South India.

This project witnessed an average concrete production of ~ 1250-1300 cu.m/ day at the site. The machines were very compatible for the project and the customer will be completing the project as per schedule.

Ajax-Fiori SLCMs (ARGO-4000) were used for preparing fresh concrete at site. This greatly reduced the cost and travel time when compared to batching plants where concrete is produced and fed to Transit Mixers which travel for longer distances to deliver concrete.

Using ARGO, fresh concrete was prepared and the entire batch was controlled with weigh batching to achieve high accuracy as per the given design mix. The concrete produced by these mixers met the strict quality parameters of the client. It was noticed that there was a reduction in the consumption of fuel and the cycle time due to the efficient site layouting by the site engineers.

ARGO has a 4X4 drive which is an advantage for the operator to reach any remote place which is a limitation for transit mixers and gradeability is another factor which is considered at every site, ARGOs has a gradeability of 24°-26° so the vehicle can be operated in tough terrains.