Road Trip for a Bridge

For the transport of wind turbines through the mountains of Western Canada, flatbed semitrailers with air springs from Continental are used. Photo: Goldhofer AG

The long flatbed is empty at the moment, but the concentration is clearly etched in the truck driver's face. He's negotiating a 1,100-km route from the Canadian coastal town of Stewart right across the green mountains of western Canada. The journey, via narrow mountain roads and over passes with extreme gradients, is part of the meticulous year-long planning for one of the region's most spectacular transport projects: turbines and rotor blades of this size have never before been transported through British Columbia, which is why the province's Transport Ministry demands a dummy run.

Following this thorough preparation, the actual transport – for which the local logistics company is using a number of Goldhofer air-sprung flatbed semitrailers – takes place a short time later. The company, based in the Bavarian town of Memmingen, is one of the world's largest suppliers of semi-trailers and heavy haulage modules that are often custom-manufactured for the particular job involved in transporting extremely heavy and/or long payloads. The flatbed semitrailer was lengthened using three extendable telescopic units to accommodate the 60-meter-long rotor blades. 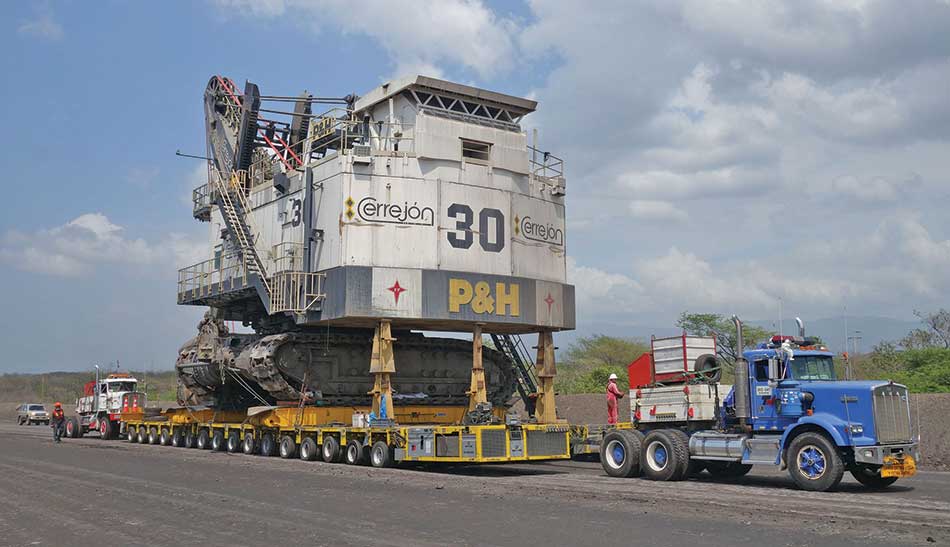 A long journey on air springs

"You can imagine the forces acting on the air springs, especially when transporting huge loads," says Hans-Jörg Reinecke, key account manager in the field of original-equipment air springs for commercial vehicles at Continental. After all, the European version of the flatbed semi-trailer can carry a maximum payload of 56 tons with up to 12 tons per axle.

Accordingly, axle manufacturers fitted their products with leaf springs for a long time, though, these are used rarely nowadays for semitrailers. Manufacturers such as Continental have long since developed effective alternatives. "Leaf springs also require more space and, therefore, increase the axle center distances, which can be an issue in the case of an oversize load convoy on narrow roads," says Reinecke. 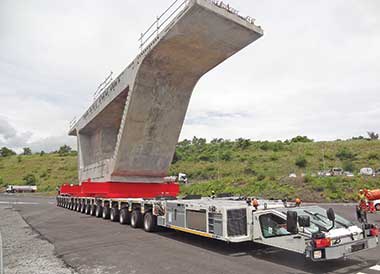 An 18-axle heavy-duty combination with three modules brought 700-tonnes bridge piers to its destination on La Réunion. The combination consists of three modules connected by hydraulic couplings and piping systems from Continental. Photo: Goldhofer AG
Another advantage of air springs is the ability to raise or lower individual axles, known as lift axles, of the semitrailer, which is a common practice in order to vary tire wear, axle pressure, and thus, road holding and fuel consumption. "Raising the lift axle reduces tire wear, while also mitigating the impact on the environment and costs," says Reinecke, citing one example of the benefits.

Wind turbines and rotors are comparatively lightweight freight. When it comes to transporting large transformers, excavators or entire bridge sections, heavy-duty modules are required, which Goldhofer produces in every conceivable variation. Depending on the configuration of the modules into heavy-duty combinations, payloads ranging from 50 to more than 15,000 tons can be moved.

In Colombia, for example, two heavy-duty combinations, each comprising three modules, were operated in parallel with a total of 32 axles to move a 1,200-ton bucket wheel excavator. It took four days to cover the mountainous 32-km route, which included gradients of up to five percent. An 18-axle heavy-duty combination of the same type took to the road to transport 36 bridge piers, each weighing 700 tons, to their destination for the new coastal road on the island of La Réunion. A 1+1/2 system was used for the combination of three heavy-duty modules. That means that a half module was attached to each of two heavy-duty modules to make the flatbed wide enough.

This semi-trailer from the Goldhofer AG is especially suitable for the transport of wind turbine components. It is equipped with air springs from Continental. Photo: Goldhofer AG

"The modules themselves are connected to each other using hydraulic couplings that Continental supplies for the type PST/SL together with the line system," adds Dieter Klüschen, key account manager. "The systems are already prefilled so that the air does not first have to be vented for fitting." And time is a valuable commodity.

When developing the new modular K25 L platform vehicle, SCHEUERLE focused on the transport safety of loads with a high centre of gravity. This is an important consideration, especially for fail-proof transport

Following the success of a trial loading operation performed in Denmark in mid-July, the DOLL wind blade transport system has been certified by Vestas. The system’s list of approvals now extends to every

SafeStorage Carving a Niche in the Personal Storage Space

As a pioneer and now a leader in the storage space industry, we have raised the standards and set a benchmark for safety, security, reliability, and flexibility, avers Ramesh Madisetty, CEO & Co-founder, SafeStorage.

Apurva Mankad, Founder & CEO, WebXpress, is confident that given the company’s domain expertise and ground-level experience, the possibilities of growing with data are immense.

At the heart of any transportation management system, there are features like route optimization and 3D packing optimization; by leveraging these, a company can raise the bar in efficient delivery management

Our carefully crafted solutions and our bottom-up approach have led to improved visibility, better management of complex situations, higher productivity for our customers, and more operational efficiency

WoodenStreet to spend 5 million USD for expanding its Warehouse Capacity

Leading furniture e-commerce WoodenStreet is planning to expand its current warehouse capacity 5-fold to 50 lakh sq.ft across India in the next 2-3 years, for which it has planned an investment of around 5 million

IndoSpace, India’s largest developer and manager of Grade A industrial real estate and logistics parks, announced the acquisition of 55 acres at Farukhnagar in Haryana. This acquisition is a joint venture with Model

The »STEPSTAR« - Goldhofer's new generation of self-tracking semi-lowloaders launched in 2020, is in great demand in the construction industry. The three- to five-axle semi-trailers offer haulage businesses superior

Mammoet has successfully completed the relocation of two tunnel boring machines and their components as part of the construction of a new metro tunnel in Melbourne, Australia. All operations were executed according