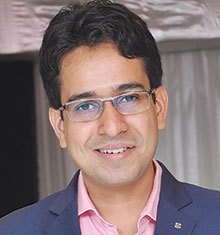 Sumit Sharma Co-Founder & CBRO, GoBOLT, shares his observations on the status of the Indian logistics industry, the opportunities and pitfalls, and steps needed for its emergence as a key sector in India’s economic growth.

The annual logistics spending in India accounts for 14% of India’s GDP, which amounts to $270-310 billion as India’s GDP is roughly $3 trillion. This is much higher than the 8-9% limit in USA, Europe etc. Almost 99% of this cost is accounted for by the unorganized sector, comprising small truck owners, small warehouse operators, freight forwarders, last-mile connectivity providers etc. This increased spending has led to rise in costs of Indian goods, making them less competitive. Also, the presence of unorganized players has led to the segment contributing lesser in terms of tax as well as circumventing the Motor Vehicle law or on-road duties. Most importantly, the sector has largely remained out of technological influence, at a time when almost every other industry is seeing digital intervention and transformation. However, led by new-age, tech-focused players, the logistics sector is warming up to the idea of digitization for progress.

Tech-enabled logistics to be game changer

In 2016, India jumped 19 places in the Global Logistics Performance Index, riding on the efficient operational frameworks introduced by a large number of tech-enabled start-ups, to ensure seamless movement of goods across the country. But what incentivized such players to enter a domain that was already a high-cost, low-margin business populated by fringe players? The rise in demand due to e-commerce has played a significant role. The staggering growth in e-retail and online purchase of goods has given the logistics sector a new lease of life. Heavy investment is being directed towards the sector, and according to a report, till 2017, in terms of the amount being invested, transport and logistics took the third and fourth spots, respectively, with $528 mn and $271 mn received in funding.

One of the biggest myths concerning Indian logistics was that direct costs such as transportation, warehousing and value-added services such as packaging, are the key reasons for India’s high-priced logistics services. The reality, however, points otherwise. 40% of India’s total logistics costs of $270-310 billion, are due to indirect costs and inefficiencies in the supply chain such as sub-optimal route planning, resource allocation and utilization, thefts, damages and losses in transit etc. In developed markets, these are typically less than 10% of the total.

Tech-enabled logistics players are utilizing the entire arsenal of modern-day technologies such as Artificial Intelligence, Machine Learning, Internet-of-things (IoT), Data Analytics, Network Programming to optimize efficiency and provide users with a seamless delivery experience. These players are being egged on to introduce newer software, delivery mechanisms and operational frameworks by e-retailers themselves, as in an increasingly homogenized market, better delivery experiences and adherence to deadlines are serving as significant determinants of success.

In November last year, the logistics sector was granted ‘infrastructure’ status - a decision that followed policy-level changes such as implementation of GST and demonetization. The status will help LSPs to avail infrastructure lending at easier terms with enhanced limits, access to larger amounts of funds as External Commercial Borrowings (ECB), access to longer tenor funds from insurance companies and pension funds, and be eligible to borrow from India Infrastructure Financing Company Limited (IIFCL). On the other hand, GST and demonetization has enabled structured players to come to the front in a sector which has been historically unstructured and fragmented. The implementation of ‘One country, One tax’ in the form of GST has also facilitated creation of optimized geographical routes for product delivery, as service providers do not have to establish a warehouse in every state to avoid paying state taxes.

In a further fillip to the industry, Commerce and Industry minister Suresh Prabhu recently announced the establishment of a new national-level logistics plan, aimed at devising the most cost-effective method to carry out logistical services in the country till 2035. The plan will identify bottlenecks and gaps prevailing in the sector, and promote technological intervention at every stage-from product surveillance to safety of the product, driver and vehicle, off-location vehicle control, geo-fencing, equipping vehicles with communication devices while developing work models that distribute driver workload so that get a better work-life balance. In essence, the plan aims to modify every aspect of the logistics industry to put it at par with the developed world economies and make Indian goods that much more competitive in international markets.


Tech-enabled players in the logistics sector are being egged on to introduce newer software, delivery mechanisms and operational frameworks, as in an increasingly homogenized market, better delivery experiences and adherence to deadlines are serving as significant determinants of success

With the growth in e-commerce, consumers as well as entrepreneurs are emerging from tier-II and III cities of India, and providing a tremendous impetus to logistical growth. These consumers have also started looking at services not only from a low-cost perspective, but are now giving importance to professionalism, user experience, tech-feasibility, operational capabilities, etc. They are opting only for tech-enabled, established LSPs rather than small-time players, leading to greater consolidation in the industry. E-commerce has changed the way logistics is valued in the entire supply chain. Logistics has grown beyond the status of an enabler to an important part of the economic revolution.

Indian logistics sector has the potential to become a $215 billion market in the next two years compared to about $160 billion currently. As per the Economic Survey 2017-18, Indian logistics sector provides employment to over 22 million people. With continued growth and inclusion of tech-focused players, a further 10% decrease in indirect costs and a cumulative growth of 5-8 percent in exports, it is expected to provide employment to about 50 million people. For the logistics sector, the current positive trends herald growth and progress in the coming years.