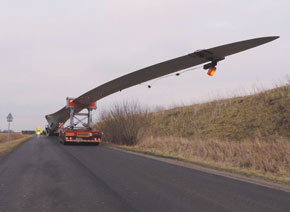 Overhang: the rotor blade protrudes approx. 30 meters over the end of the vehicle. In order to minimize this overhang, the SMDEL 4-67 from NICOLAS has a flattened gooseneck on which the front end of the blade rests.
Although LM Wind Power had sent enquiries to a number of providers, Mammoet Wind Brande A/S was the only one which could carry out the assignment without requiring any costly moving procedure using two cranes, thanks to the company´s NICOLAS SMDEL 4-67 5-axle semi-trailer complete with its single telescopic function. The vehicle from the French special vehicle manufacturer NICOLAS Industries SAS - part of the TII Group, the world´s leading manufacturer of heavy-duty vehicles - offers high axle compensation, a large steering angle and a strongly pre-loaded centre beam which, in this case, was extended even further by means of two so-called spacers. As a result, it has a high ground clearance and can drive over obstacles such as roundabouts that other vehicles cannot negotiate. In addition, the blade can be positioned directly on the extra-low gooseneck in order to save space.

With a total combination length of around 100 metres, "manoeuvrable" is hardly the best description and, without the availability of the SMDEL 4-67, the transport of the 73 m long blade would have been far more expensive and complicated. The route itself provided enough challenges along the way. Initially, the transport went via Lunderskov (Jutland) on the E45 in the direction of Germany in order to branch off after 40 kilometres towards Copenhagen. Unfortunately, the direct route was blocked by some unfavorably-positioned concrete pillars. 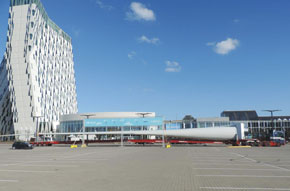