The BladeMAX celebrated its premiere in Munich: the transport solution for the new generation of wind turbine blades. The rotor blade adapter is by far the strongest of its type on the market. With 650 mT, only the BladeMAX can move the latest mega wind turbine blades, so they can be transported safely and efficiently through wooded or built-up areas, in tight hairpin bends or in mountainous regions.

Rotor blades can be picked up, tilted up to an angle of 84°, swivelled and rotated 360° around their own axis using the adapter, which is mounted on a self-propelled or pulled modular vehicle. The patented Roto-Translation is unique; with its sophisticated levering tool, the center of gravity remains considerably more stable than with conventional devices when the blade is moved from vertical to horizontal position.

Greater handling stability is guaranteed with the patented stability control system. The interaction of electronics, hydraulics and visualization increases safety, as the center of gravity shifts when moving the blades, such that BladeMAX can operate without the use of counterweights weighing tons. 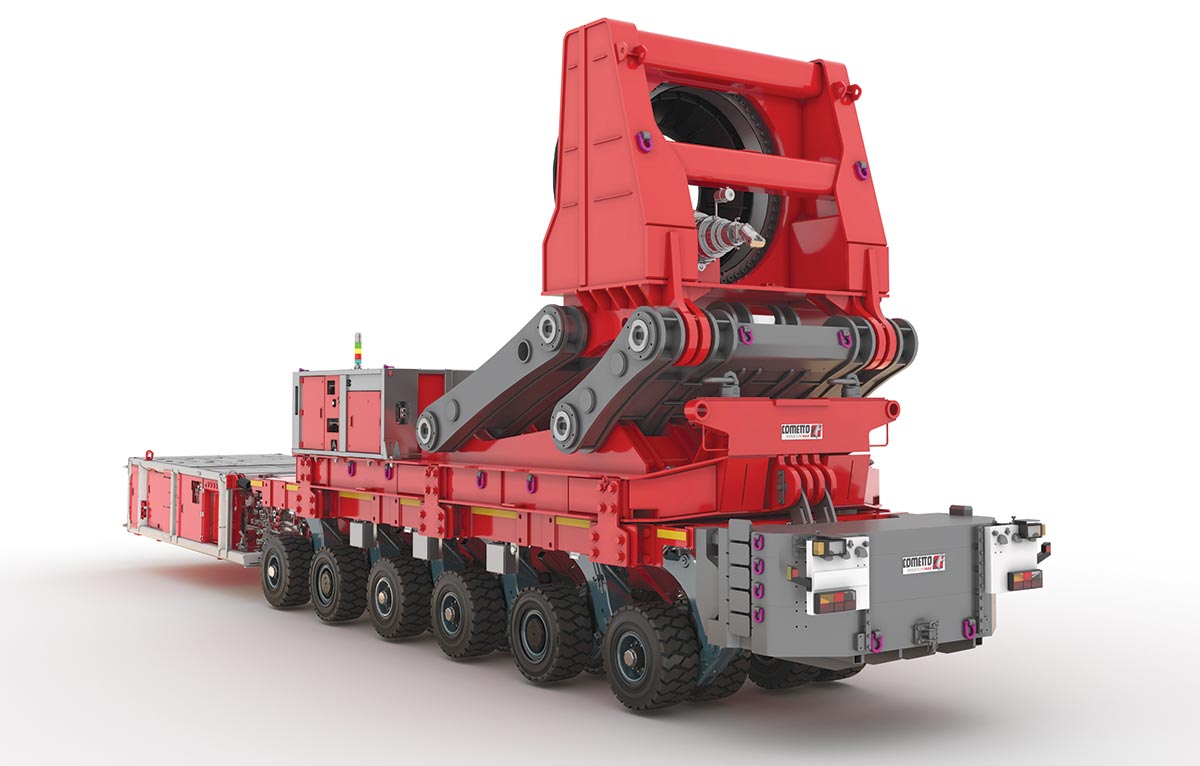 The vehicle manufacturer also offers a wide range of solutions for wind blade transport with self-steering trailer technology. From 3 to 5 axles, on different tire sizes and different axle systems, even up to the pendle axle, Faymonvillle offers answers to all questions on this intensively discussed topic.

Apart from Faymonville, the two brands Cometto and MAX Trailer are also successful members of the Faymonville Group. Cometto is the center of excellence for self-propelled vehicles and exhibited its electronically steered modules in Munich. The BladeMAX is mounted on such a 6-axle MSPE 48t.

A 4-axle self-propelled vehicle with power pack in the Evo3 series was also on display. Its axle load of 70 t per line is unique in the industry and it is the most powerful version available for the heaviest transport tasks. In addition to the high payload, the self-propelled vehicle impresses with its versatile range of configuration options and manoeuvrability. The advanced electronic operating system and the special Cometto software make steering angle of ± 135° possible. Each axle works independently and due to this interaction, the MSPE can be moved in every direction. Power packs are available in three power classes for the drive, in addition to which there is an extensive range of options as spacers or driver's cabs.

Another exhibit from Cometto was a 4-axle MGSL module. With its strengthened loading area, it reaches point loads up to 50,000 kg above the wheel arches and 80,000 kg above cross members for heavy and concentrated loads. Another impressive fact is that the MGSL has the highest bending moment on the market. Each axle line has a technical axle load at 0.5 km/h from 45,000 kg. The MGSL offers seamless interoperability with identical vehicles from several other manufacturers.