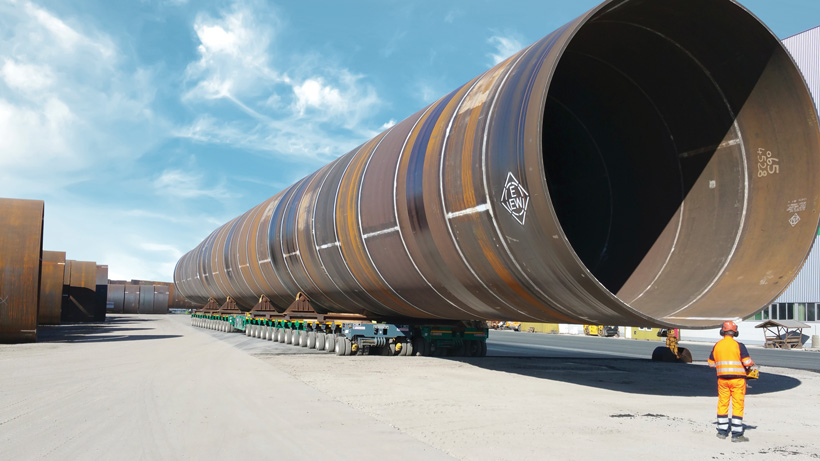 There is a clear upward trend - wind turbines both on and offshore have been getting increasingly bigger for a number of years now. In this respect, Rostock-based EEW Special Pipe Constructions GmbH (EEW) has produced the world's largest monopile with a diameter of 7.8 metres and a length of 84.5 metres. For in-plant transportation, self-propelled InterCombi SPEs from SCHEUERLE (TII Group) are used. Logistics providers, Buss Port Logistics, loads the monopiles from the factory in Rostock onto barges with the help of SCHEUERLE SPMTs. These are subsequently transported to the Buss-owned Orange Blue Terminal in Eemshaven and unloaded again with the same vehicles.

54 of altogether 67 monopiles for the Veja Mate offshore wind park have already loaded but a lot of work is still waiting for the proven modular vehicles from SCHEUERLE (TII Group). A total of three monopiles are each loaded onto a barge using the Ro/Ro procedure, which then travels from Rostock to the interim storage facility in Eemshaven. Final destination is the North Sea off the German coast where the monopiles are being installed as part of a wind park which will supply electricity to 400,000 households. For the transport of the huge components, with a total weight of 87,100 tonnes, an extensive fleet of SCHEUERLE vehicles is in use: EEW and Krebs Korrosionsschutz GmbH are utilizing 144 InterCombi SPE axle lines in order to move the monopiles from the welding and paint shop to the storage area. With 48 SCHEUERLE SPMT axle lines, Buss Port Logistics loads the gigantic components onto the barge and unloads these at the Orange Blue Terminal in Eemshaven with a further 48 axle lines.

Dirk Pallatinus, Transport Operations Manager at EEW, is extremely satisfied with the SCHEUERLE self-propelled trans- porters which are popular around the world due to their high loading capacity, precise electronic steering and large range of accessories: "For transportations of this magnitude, there is no room for error – every single detail must be correct. That's why we have relied on the TII Group and their vehicles for a very long time now. It's no surprise that the vehicles are highly developed; after all, we have had hydrostatically driven self-propelled transporters in our programme for more than 45 years and are world market leader in the production of vehicles with hydraulically-supported pendulum axles. However, the experience and knowledge of our employees also play a major role. And it's not that for nothing we provide a wide range of training courses for our customers which cover all aspects of our vehicles. Then, only when the vehicle and operating personnel complement each other perfectly is safe and economical transportation guaranteed," says Joachim Kolb, Area Manager Sales and responsible for the wind energy sector.

SPMTs of the TII Group
In the second half of the 20th century, a trend began that would change the entire transport industry forever. With the first, self-propelled transport modules for the ship-building sector and SPMTs (Self-Propelled Modular Transporters) developed by SCHEUERLE in the late 70s and early eighties, potential payloads suddenly increased and are now, in-principle, unlimited. 70% of all shipments over 3,000 tonnes and 90% of all shipments over 5,000 tonnes are now carried out using modular, self-propelled vehicles from the TII Group. As a result, the modular production found its way into the oil and gas industry, ship-building and many other industries. Individual weights of 15,000 tonnes - a world record - have been transported with SPMTs from the TII Group.