THE STRUCTURE WORKS OF MAHENDRA RAJ 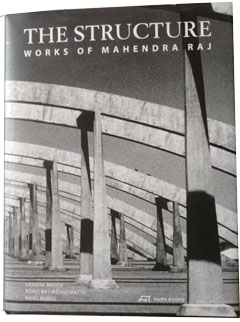 I have had the privilege of being acquainted with Er Mahendra Raj and his works for over 40 years. This puts me in a special position to talk about the Man and his Works while reviewing the book.

If I were to use one word to describe the Man which is so well reflected in his works and ably captured in the book is 'Elegance'.


He started his professional career with the structural designs of the buildings designed for the new capital city of Chandigarh by the famous French Architect Le Corbusier who is one of the names credited with modernism in the 20th century architecture and of course his love affair with 'beton brute' (bare or exposed concrete). Raj, too, was inspired by exposed concrete which is quite evident from the beautiful photographs of the works presented in the book.

The book is eminently readable because it puts life into inanimate subjects like structures and concrete. It starts with a most interestingly written autobiography of his life's journey following his dream of designing structures.

Building design is a process of integration between structure and architecture. Mahendra Raj has worked alongside architects for so long that he himself, without consciously trying has become an architect (without a formal degree of course!). This is evident from the variety of awards he has received for Architecture.

Of the many landmark projects in India by Raj perhaps the most significant one is the Hall of Nations (1971-72), a large span space frame enclosure constituted from thin concrete members. It is located in Delhi's Pragati Maidan, the most well known Exhibition Ground in the country. While a debate rages on whether it should be pulled down to make way for a new Convention Center it is hoped that the powers that be will not waste further time in designated it as a heritage structure as it represents the state of the art of Structural Engineering of a bygone era and will always inspire engineers and architects to create magnificent and iconic edifices.

The book gives an insight into a brilliant mind and his interaction and collaboration with the best known architects in India and abroad of his time. The last chapter of the book is a record of an absorbing discussion between BV Doshi, the famous architect from Ahmedabad with Raj, both considered masters in their own disciplines. At one point Mahendra Raj says

The secrets of reinforced detailing at joints are revealed in the reproduction of prints of the drawings which were manually drafted decades ago. and a glimpse of these structures can be seen in the book.