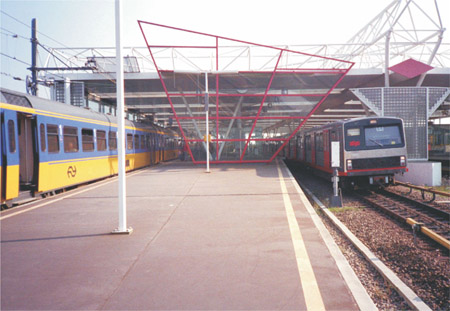 Seamless travel is an important characteristic of urban transport system. Transfer is an essential part of multi– modal trip and traveler has to change modes at transfer nodes. Multi–modal Transport System (MMTS) is an integrated approach to incorporate all components of urban transport into a single coordinated, planning and operation system for efficient use of available transport resources and infrastructure to ensure better urban mobility within a wide range of modal options for the commuters. In fact, multi–modal transport system relates to single trip consisting of combination of modes i.e. vehicle modes (bus, metro, car, tram, etc.) or service modes (private/public) between which the traveler has to make a transfer. Multi–modal transport system has two basic components: 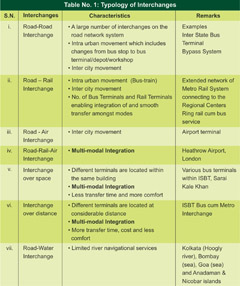 Integration is a key to sustainable and need responsive public transport. Integration of different modes is required at various levels. New modes of public transport i.e. Metro, Monorail, LRT etc. must be properly integrated. The current infrastructure i.e. BRT corridor, Low floor AC buses, operation through vehicle tracking system, central parking depots (every vehicle can be checked for clearness and fitness before going out for service) etc. are needed to be improved. The solution of traffic problems in metro cities demands the construction of public transport oriented infrastructure. Interchange is one of such infrastructures which promote seamless travel across the modes. 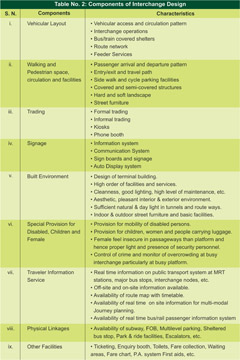 A bus or rail terminal or terminus, is the point at which a transport route starts or ends, where vehicles or trains stop, turn or reverse, and wait before depending on their return journeys, and where passengers board and alight from vehicles. It also often provides a convenient point from which services can be controlled. Hence it is essential that stations particularly interchange stations must not only be constructed as per design standards with adequate capacity, but also suitably located with all facilities and services (Iles, Richard 2005).

Interchange is defined as people place, place of waiting and place of movement (access to access, change mode and direction). Interchange should be viewed not only as a form of movement infrastructure but as 'seeds' for the emergence of intensive, vibrant, urban nodes and as important elements of place making (Naude, S. et al. 2005).

The concept of interchange within the existing transport situation is to integrate the mechanical modes (either private or public) most suited for each stage to obtain overall a more efficient transport system. An unfortunate feature of the resulting interchange process, however, is the inconvenience and time spent transferring from one mechanical mode to the next. This is the penalty of transfer and it must be kept as low as possible for successful interchange (Bell, C. Margaret 1981). The general guidelines for interchange design are as follows: 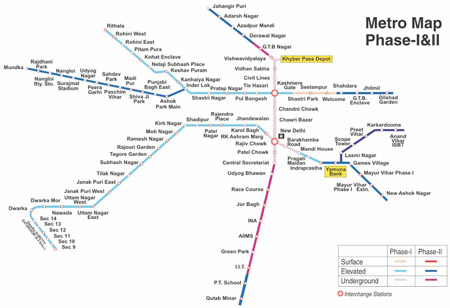 It is observed that interchange design is directed related to parking facilities (free/charged) at the station, access facility, egress facility, waiting and transfer time, single fare system, feeder services, etc. Various steps have been taken for integration of buses with metro but expect smart card ticket, there is no provision for integrated fare system between two different modes. However, escalators, lifts, ramps, etc are provided at metro stations for seamless transfer from one metro to another, one level to another and one direction to another, being in the same mode. Accordingly, interchange has been designed for seamless travel with maximum comfort.

In Dutch, the design of interchange station is generally based on the principle of one mode (transport) being grade separated so that it can cross another mode (transport) at an angle. It helps to create the possibility of easy interchange with the minimum of walking distance.

It is one of the best examples of Rail-Air Interchange Station which has various provisions to make travel more comfortable, efficient and seamless. Fig. 5 illustrates various components such as :

In Toronto, bus and sub way station is combined and designed as interchange station. Street transport (bus) and subway (rail) are provided side by side. A well planned interchange design allows passengers to enter from street pass through ticket turnstiles and take either left turn for street transport or right turn for subway and vice versa. Bus stop within the station's 'fare paid' zone has advantage that when interchanging between the modes even single-trip 'cash' fare passengers do not need to pay a second fare.

It consists of two platforms which are used as interchange between metro and long-distance trains traveling in the same direction. It also visualizes that metro train is shorter in length and does not extend beyond the station roof.

Fig 7 B illustrates lower level of Amsterdam Duivendrecht Interchange Station. It has platforms for trains on different routes. The concourse is provided between these platforms which have lifts, steps, etc to connect upper platforms.

Interchange design for seamless travel is much influenced by flow of commuters and traffic which further attract or repel other activities at both station and surrounding areas. Individual interchange includes volume, mix & type of passengers using the same, its hours of operation, character of surrounding and connecting areas, length of walkways, informal space, personal security, incompatibility of tickets, etc. In this context, good design is an essential ingredient to motivate passengers to find travel by public transport convenient, safe & enjoyable and hence architecture and interior design should always give priority to passenger needs.

An interchange design may provide clear routes between services or modes to minimize the time and efforts involved in making transfer. Route connecting the stations where passengers have to board and alight from public transports should be clearly and consistently identified. It helps to take decision regarding routes, direction of movement, guidance and reassurance for seamless travel. The use of visual aids, architectural treatments on the floors, walls, finishes, etc can provide better "way finding information". However, interchange design may take care of accessibility requirements of impaired passengers for seamless travel.