H S Mohan
Chief Executive Officer
Infrastructure Equipment Skill Council
Over the years, growth in the infrastructure equipment sector has been synonymous with the economic health of the country. In 2010, the sale of construction equipment was around 60,000 units and expected to touch 300,000 units over the next decade. With existing shortage of skilled manpower coupled with this anticipated growth, an overall requirement of nearly two million operators and mechanics was projected.

Realising this futuristic need and with the existing vocational education system being unable to fully support the industry; the Infrastructure Equipment Skill Council (IESC) was formed in 2014 as an apex body to spearhead the skilling of workforce in the sector. IESC established its head office in Bangalore in 2014 and commenced operations with the primary focus on training and certification of operators and mechanics. 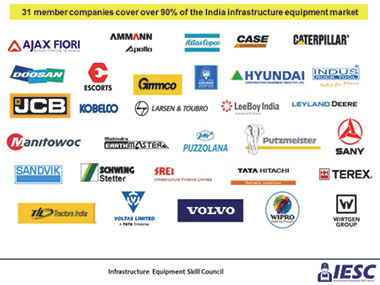 The Council, promoted by the Indian Construction Equipment Manufacturers Association (ICEMA), is funded partly by contributions from the industry and by the National Skill Development Corporation (NSDC). The IESC works in close coordination with the Confederation of India Industry (CII).

IESC presently has 31 members comprising equipment manufacturers (OEMs) and equipment financiers etc whose products constitute active engagement of over 90% of the industry’s workforce.

The Council is governed by an 18 member-body comprising senior executives from all segments of the industry as well as representatives from related bodies like Department of Heavy Industries, Builders Association of India (BAI), Financial Institutions, Academia and NSDC.

The mission of IESC is to transform the skill landscape in the sector by: Initiatives undertaken

Development of NOS & QPs; for 33 job roles; validated and in use by the industry; maximum at NSQF Levels 3 & 4 (Operators & Mechanics) covering over 80% of workforce in the industry. Another 10 nos are in the offing for balance products and also bridge the gap to facilitate career progression. These were developed in close coordination with the construction & mining industries.

The job of operators and to an extent mechanics being non-aspirational; for the first time, a career progression path has been mapped out, which has been appreciated in the industry. 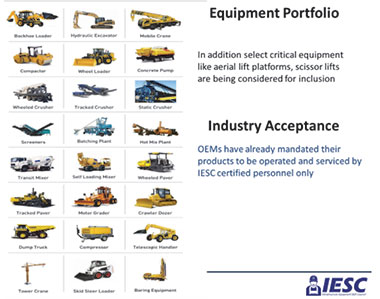 Accreditation of around 50 Training Partners pan India; majority of whom are OEMs and their associates, followed by empanelment of nearly 200 qualified and certified trainers from the industry which has enabled us to train around 4500 personnel to date.

MoUs have been signed with various States Skill Development Missions & Corporations like Kerala, Andhra Pradesh, Uttarakhand, Gujarat, and Jharkhand, to scale up skilling activities. Similar proposals with Rajasthan and Assam are in the pipeline.

Following the MoU with National Highways & Infrastructure Development Corporation Ltd (NHIDCL), IESC has successfully completed the first round of programs to skill personnel being employed at various road construction project sites in the North-East.

Likewise, initiatives for skill development in organisations like CIL, MOIL, and Indian Army, have reached the delivery stage. Programs with AICTE-affiliated colleges have already commenced. The Council is working closely with the Auto Sector & Logistic SSCs for creating Centres of Excellence. 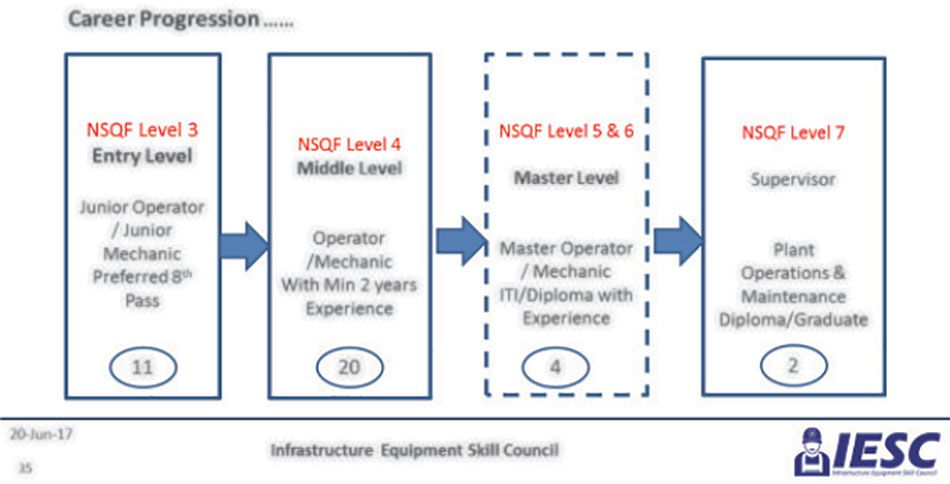 The growth rate of the construction equipment sector is largely reflective of the growth in the infrastructure segment in India. The volume of equipment sales is expected to grow from around 49,700 units in 2015 valued at $2.8 billion at a realistic rate of 11.8% to 82,750 units in 2020; value $5.0 billion.

It is estimated that over a million additional trained operators and maintenance personnel would be required to meet the projected growth of construction equipment in the coming years. Formal training and certification of the current workforce will also be critical, considering their bearing on the equipment operating and maintenance costs.

Around 60% of our GDP is contributed by the Service sector. The Manufacturing Sector has been almost stagnant in the last decade and half. Skilling per se does not create jobs. Jobs is a function of growth of economy, expansion of service sector enterprises, export growth and infrastructure developments. Though, being promoted by equipment manufacturers, the operation of IESC is de facto in the service industry which is the major contributor to the GDP.

The major challenges are primarily the job roles of operators and mechanics to an extent being non-aspirational; and no visible demand for certified operators. With the CEMM Act getting approved or till such time, an interim Govt. mandate for certified/licensed operators only to ‘man’ the machines backed by an effective monitoring system; the demand for skilled operators will rise exponentially. 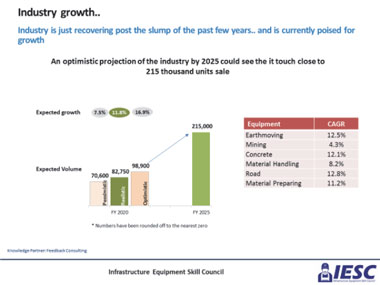 Majority of the equipment manufacturers (OEMs) in India are global entities, who have set up high capex facilities and upgraded their existing ones to support both their Indian and international operations. Skilling people to operate and maintain these machines with latest technologies outside India is both a challenge and an opportunity.

While the Industry is fully committed to the skilling ecosystem, the growing demand for operators & mechanics cannot be fully met by the OEM’s alone. Hence, the need to set up additional training centers with world-class facilities to ensure quality skilling. Cost of setting up of such Training Centres is high, both in terms of capex and opex. Hence, Government support is called for.

Concurrently, it is hoped that the CEMM Act (Construction, Earthmoving, Mining & Material Handling Equipments Act) will come into force; it will be a game changer in the industry. Till such time, efforts will be to bring the vast pool of experienced operators (but not formally certified) into the fold through the RPL Model (Recognition of Prior Learning). All the stakeholders, primarily the end users through their apex bodies like Builders Association of India & Crane Owners Association, to name a few will be co-opted.

Recently, IESC participated in EXCON 2017 held in Bengaluru. The indoor stall saw an unprecedented number of visitors, both Indian and foreign, many of whom showed a keen interest in collaborating with IESC on the ‘Skill India’ mission. IESC also signed an MoU with COAOI (Crane Owners Association of India) for skilling of their personnel at various project sites in the country.

The other highlights of this exhibition, which has become a global event, was the recognition, through the Yellow Dot Awards instituted by the Equipment Times (a leading media publication), of various initiatives taken by the industry to not only manufacture products meeting global standards, but concurrently skilling personnel to operate and maintain these state-of-the-art machines under the aegis of the IESC. It needs no mention that these have gone a long way in encouraging and motivating the workforce in the infrastructure sector.

IESC has, over the past three years, established a strong foundation and framework for the skill ecosystem. Concurrently, the industry is also in the process of recovering from the recent slump and steadying itself for the projected growth in the coming years. IESC is well poised to meet the demands of skilled manpower in the sector.