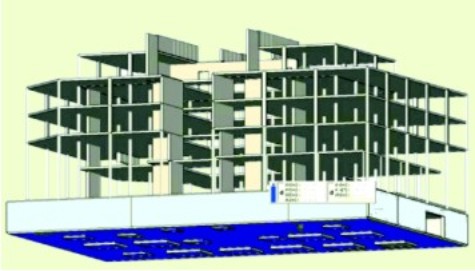 Dr. Paresh V. Patel, Professor Department of Civil Engineering, and Dipak K. Jivani, Institute of Technology, Nirma University of Science and Technology, Ahmedabad
Earthquakes are major natural disasters and increased seismic activity has attained greater importance for analysis of building considering seismic forces. Dynamic analysis is generally believed to provide the most realistic predictions of structural response induced by earthquake ground motions. The forces on building depend on peak ground acceleration and time period of building. Subsoil condition is responsible for the amplification of ground motion and amplification may increase or decrease the value of spectral acceleration coefficient. So, analysis using code specified response spectra may underestimate or overestimate seismic forces. An attempt has been made in this work to study the effect of site specific response spectrum on estimation of seismic forces on shear wall building. For site specific response spectrum analysis, response spectra are developed at seven sites of Ahmedabad. One dimensional equivalent linear approach based software ProSHAKE is used for development of response spectrum. Acceleration time history recorded at passport office building of Ahmedabad on 26th January 2001 Bhuj earthquake is considered as an input motion. The response of different multi–storied regular shear wall frame structures on various sites are obtained in terms of base shear and are compared with that obtained using IS 1893 specifications.

Earthquakes are major natural disasters, responsible for loss of life and damage to property. Prediction of the earthquake is not possible. In this decade, the increased seismic activity, attained greater importance on analysis of structure for seismic forces. The seismic forces depend on peak ground acceleration and time period of structure. In India, during Bhuj earthquake 2001, Ahmedabad experienced a heavy damage in some parts, in spite of its greater distance from epicenter. During an earthquake, there is release of energy, which reaches to the ground surface and to the structures by means of seismic waves. These seismic waves originate from the point of occurrence of the earthquake and travel through bedrock and soil strata below the structure. When these waves travel through the soil profile, their properties such as amplitude, velocity, acceleration, frequency etc. get altered due to various soil parameters. This means that intensity of ground shaking or peak ground acceleration at different sites can be different during a particular seismic event.

The estimation of strong motion characteristic in terms of peak ground acceleration and spectral ordinates is important for any engineering design. Loading condition is the main input in structural design, which must satisfy certain condition regarding their level and frequency of occurrence during the lifetime of a structure. Generally, various important structures and buildings are designed for seismic forces specified in IS 1893 (Part I): 2002. The response spectra of codal provisions are applicable for general soil conditions but not reflecting local sub soil characteristics. Sub soil condition plays an important role in response of ground surface under specified bed rock motion and thus in development of response spectra for a specific site. For the important structures, response spectrum obtained from site specific ground response analysis is recommended rather than that of code specified response spectrum.

In present paper site specific ground response analysis is carried out for Ahmedabad soil sites. For development of site specific response spectrum ProSHAKE software is used while for dynamic analysis of multistoried wall frame buildings ETABS software is used. ProSHAKE is based on one dimensional geotechnical site response model and ETABS is widely used software for three dimensional structural analysis of buildings.

Site specific ground response analysis is required to determine the response of a soil deposit to the motion of the bedrock immediate below the soil. It is also used for determining the effect of local soil conditions on amplification of seismic waves and hence estimating the ground response spectra. The term site specific is used because as the seismic waves travel from bedrock to the surface, the soil deposits that they pass through change certain characteristics of the waves, such as amplitude and frequency content. Site specific response analysis is considered the most important part as the obtained response spectra of various sites is required for dynamic analysis of the structures. Following are the steps performed to generate site specific response spectrum (Govind Raju et al. 2004).

The local characteristics of soil such as shear wave velocity, shear modulus of the soil deposits, unit weight of soil, thickness of soil layers are obtained from the geotechnical and geophysical investigations.

Response spectra of calculated ground surface motion are statically analyzed to develop the design spectrum for the site. The response spectrum describes the maximum response of a single degree of freedom (SDOF) system to a particular input motion as a function of the natural period and damping ratio of the SDOF system. The response is expressed in terms of acceleration, velocity or displacement is referred as the spectral acceleration (Sa), spectral velocity (Sv), and spectral displacement.

Based on dimensionality Site Specific Ground Response Analysis can be classified as:

This method is widely used for site specific ground response analysis. The methods of one-dimensional ground response analysis are useful for level or gently sloping sites with parallel material boundaries. Such conditions are not uncommon and one-dimensional analysis are widely used in geotechnical earthquake practice. The One-dimensional ground response analysis are based on the assumption that the ground surface and all material boundaries below the ground surface are horizontal and soil and bedrock are assumed to extend infinitely in all lateral horizontal directions. The second assumption is that inclined incoming seismic rays are reflected to a near-vertical direction, because of decrease in velocities of surface deposits. Therefore the response of the soil deposit is caused by shear waves propagating vertically from the underlying bedrock. During a strong earthquake motion, the stress waves, from the earthquake focus propagate vertically when they arrive at the earth’s surface. These vertical ground motions are not as important as horizontal ground motions from the structural design point of view.

The data of soil profile of the sites corresponding to various parameters such as number of layers of soil, thickness of each layer, unit weight, shear modulus are obtained from borehole data and geophysical testing. The soil profiles for I.I.M. Maninagar, Passport Office, NIT, Bodakdev, Sola and Chandkheda Site are shown in Tables 1, 2, 3, 4, 5, 6 and 7.

From ground response analysis various parameters like peak ground acceleration, velocity and displacements are obtained for all the three components of the ground motion. But as the longitudinal direction is critical these parameters are compared for all the seven sites as shown in Table 8.

This study has been carried out to understand the effect of local soil conditions on response of shear walled building with 10, 15, 20, 25 and 30 storey. Shear walled frame building is chosen for study purpose because shear wall is an efficient way of stiffening the structure. Shear walls have been the most ommon structural systems used in building to resist horizontal forces caused by earthquakes. The shear wall frame buildings considered are three by three bays with fixed base resting on different sub soil condition. Plan of the shear wall frame building is shown in Figure 3. Story height of building is considered as 4m. The dimension of various structural elements is given in Table 9.

The time period of all the buildings are obtained using dynamic analysis and are compared with that of empirical formula given in IS1893-2002. The same is shown in Figure 4.

From the above study following conclusions can be made: