Effect of Superstructure Suffering in Highrise Structures on Seismic Load Analysis
Seismic forces are the most serious and dynamic. Although various approaches to make the building safe by minimizing natural period, increasing damping etc. are practiced, most common intervention for non-engineered building is strengthening by various measures. In order to investigate the feasibility of superstructure stiffening for highrise buildings, analytical study is carried out for buildings of above ten storey high. The idea of superstructure stiffening is explored to enhance the effectiveness of this range of buildings to withstand the seismic forces and wind forces.

Buildings decay due to weather, load effects and foundation settlement etc. The building, if it has to resist an earthquake shock it should be safe under normal load and resist the lateral load without collapse. The primary structural skeleton of a tall building can be visualized as a vertical cantilever beam with its base fixed in the ground. The structure has to carry the vertical gravity loads and the lateral wind and earthquake loads. Gravity loads are caused by dead and live loads. Lateral loads tend to snap the building or topple it. The building must therefore have adequate shear and bending resistance and must not lose its vertical load-carrying capability. The two basic types of lateral load-resisting systems in the category of interior structures are the moment-resisting frames and shear trusses/shear walls.

This analysis and design software proved to be worth its mettle and handled all the various challenges that had to be solved during the course of training. This software is released by Research Engineers International, California, USA. It has an intuitive, user-friendly GUL, visualization tools, powerful analysis and design facilities and seamless integration to several other modeling and design software products. The software incorporates the principles of FEM for structural analysis. The software has provisions to allow specifying the entire structure as a collection of its various elements. Thus, it allows us to discretize the structure. The software has an extremely friendly GUI that makes modeling easy and accurate. For static or dynamic, or pushover analysis of bridges, containment structures, embedded structures (tunnels and culverts), pipe racks, steel, concrete, aluminum or timber buildings, transmission towers, stadiums or any other simple or complex structure, STAAD.Pro has been the choice of design provisional around the world for their specific analysis needs. It provides a comprehensive and integrated finite element analysis and design solution, including a state of the art user interface, visualization tools, and international design codes. It is capable of analyzing any structure exposed to a dynamic response, soil-structure interaction, or wind, earthquake, and moving loads. STAAD.Pro is the premier FEM analysis and design tool for any type of project including towers, culverts, plants, bridges, stadiums, and marine structures. With an array of advanced analysis capabilities including linear static, response spectra, time history, cable, and pushover and non-linear analysis, STAAD.Pro provides us a scalable solution that will meet the demands of our projects any time.

STAAD.Pro will eliminate countless man-hours required to properly load our structure automating the forces caused by wind, earthquake, snow, or vehicles. In addition, no matter what material we are using or what country we are designing our structure in, STAAD.Pro can easily accommodate our design our loading requirements, including US, European (including the Euro codes), Nordic, Indian, and Asian codes; even special codes AASHTO, ASCE52, IBC and the US aluminum code can be catered to.

With an unparalleled quality assurance program open architecture or customization and a 25 year track record including such projects as the MCI stadium in Washington DC, Wimbledon Court No 1 in Europe and the tallest transmission tower in Asia, STAAD.Pro is the perfect workhorse for a design firm.

Once when the overall geometry of the structure has been specified, the section properties, of the individual member elements are specified. Thereafter, loading on the members are specified. Following this the support conditions relevant to the structure are specified as well. The input software can easily be inspected and modified with the help of STAAD editor. Thereafter, the analysis can be performed. The analysis yield us the parameters required for performing the structural design of the structure. The required values can directly be read from the STAAD output file. This software also allows us to perform design as per specifications in various international codes of practice.

Structural stiffening can be achieved by the following methods:

Buildings behave poorly in earthquakes because the existing lateral load resisting components do not have adequate strength and ductility. Stiffening the structure by providing additional lateral load resisting elements, thereby reducing the lateral deformation, is an effective method of improving the performance of the building. The increasing of the dimension of the column results in stiffening the structure to resist the lateral forces. Figure. 1.

Reinforced concrete (RC) buildings often have vertical plate-like RC walls called Shear Walls Figure 2 in addition to slabs, beams and columns. These walls generally start at foundation level and are continuous throughout the building height. Their thickness can be as low as 150mm, or as high as 400mm in highrise buildings. Shear walls are usually provided along both length and width of buildings (Figure 1). Shear walls are like vertically-oriented wide beams that carry earthquake loads downwards to the foundation. 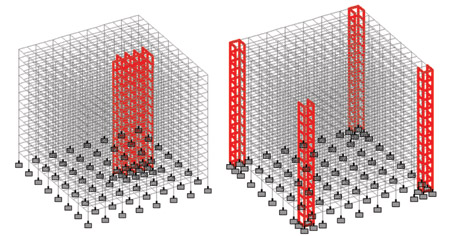 Properly designed and detailed buildings with shear walls have shown very good performance in past earthquakes. Shear walls in high seismic regions require special detailing. However, in past earthquakes, even buildings with sufficient amount of walls that were not specially detailed for seismic performance (but had enough well-distributed reinforcement) were saved from collapse. Shear wall buildings are a popular choice in many earthquake prone countries, like Chile, New Zealand and USA. Shear walls are easy to construct, because reinforcement detailing of walls is relatively straight-forward and therefore easily implemented at site. Shear walls are efficient, both in terms of construction cost and effectiveness in minimizing earthquake damage in structural and nonstructural elements (like glass windows and building contents).

The seismic strength and stiffness of framed structures can be efficiently and economically increased using steel braces or shear walls. Usually steel braces are used in steel buildings. However, in recent years steel braces have been used in RC buildings because of ease of construction and high strength to weigh ratio. Braces reduce flexure and shear demands on beams and columns and transfer the lateral loads as axial loads.

The advantages of retrofitting an RC frame by steel braces are as follows: 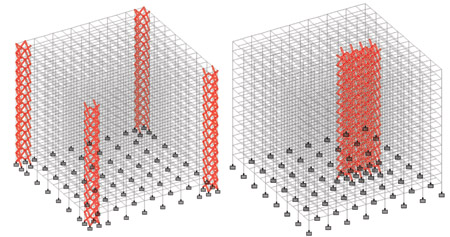 Analysis of the Structure

The structure was analyzed as ordinary moment resisting space frames in the versatile software STAAD.Pro. From the analysis, we get member end forces and support reactions. From this value we design the structure.

Seismic loads, which were calculated by referring to IS 1893 and were added as nodal loads on the structure.


Calculation of base shear for seismic analysis

The design seismic base shear is the total design lateral force at the level where inertia forces generated in the structure are transferred to the foundation, which then transfers the forces to the ground of the structure.

The approximate fundamental natural period of vibration (Ta), in seconds, of a moment resisting frame building without brick infill panels may be estimated by the empirical expression:
Ta = 0.075h0.75
where
h = Height of the building in m
Ta = 1.1022sec
The average response acceleration coefficient Sa /g = 1.234

Zone factor is the factor to obtain the design spectrum depending on the perceived maximum seismic risk characterized by Maximum Considered Earthquake (MCE) in the zone in which the structure is located. The basic zone factors included in the standard codes are reasonable estimate of effective peak ground acceleration. In this work, the structure is considered in the zone 3, therefore the zone factor is 0.16.
Z (Zone Factor) = 0.16
I (Importance Factor) = 1
R (Response Reduction Factor) = 3

From the analysis part comparing the drift and the column moments of each case under seismic load, the shear wall located at center is more feasible than other methods of stiffening of the highrise structures.