There is a need for development of alternative materials for the building industry with low carbon footprint and at the same time to save energy. Clay has been used as a building material from the beginning of humankind. The Compressed Earth Blocks often referred to simply as CEB, is a type of manufactured construction material formed by the compression of the soil in a mould with the help of a manual or motorized press to form a regular block of appropriate shape and size. In this experimental investigation, a series of test bricks were fabricated using various percentage of laterite soil 91%, 90%, 89%, and 88% stabilized with 4%, 5%, 6%, and 7% of cement stabilizer with 5% of sand, compacted with a hydraulic press paver block and brick making machine. Results of dry compressive strength, wet compressive strength and water absorption were tabulated. Results show that 75 to 80% of compressive strength can be achieved at the age of 7 days as compared to 28 days maturity age and full strength can be attainable at the curing period of 28 days.

Lateritic soils are formed in the tropics through weathering processes that favour the formation of iron, aluminum, manganese and titanium oxides [6]. These processes break down silicate minerals into clay minerals such as kaolinite and illite. Iron and aluminum oxides are prominent in lateritic soils, and with the seasonal fluctuation of the water table, these oxides result in the reddish-brown colour that is seen in lateritic soils [4]. These soils have served for a long time as major and sub-base materials for the construction of most highways and walls of residential houses in tropical and sub-tropical countries of the world [2]. Civil engineering applications of these lateritic soils are continually being developed with the use of different types of stabilizers. The stabilized soil-based products are as such viewed as environment-friendly and low-cost energy materials for sustainable building applications [5].

High cost of building materials has been the bane of construction industry in the developing countries as a result of import of most of the building materials. As prices increase sharply, there is a growing awareness to relate research to local materials as alternatives for the construction of functional but low-cost dwellings both in the urban and rural areas [1]. One of such local materials that is being researched is lateritic soil. Lateritic soil has been one of the major building materials for a long time. The main reason lies on the fact that it is readily available and the cost of procuring it is relatively low [1].

Lateritic soil possesses other advantages which makes it potentially a very good and appropriate material for construction, especially for the construction of rural structures in the developing countries. These merits include little or no specialized skilled labour required for laterized compressed blocks/bricks production and for its use in other construction works [6].

The use of stabilized mud blocks is an alternative to burnt bricks, where soil is being stabilized with the stabilizers like cement, lime, molasses etc. and pressing them under high compaction, hence, avoid burning. In avoidance of process of burning, saves a lot of energy and hence, it becomes economical [3]. The question of economy and conservation energy arises, when burnt bricks are invariably used. The alternative, effective remedy is the use of STABILIZED BLOCKS. Soil stabilization techniques have been used for improving the properties of soil viz., compressive strength, erosion resistance, absorption etc [3]. The process of compaction can further improve the properties of stabilized soil. The process of compaction leads to higher densities, thereby, higher compressive strength, better erosion resistance, lesser water absorption and permeability. The stabilized mud blocks can be used for wall construction, as an alternative to conventional walls [3].

The above approach not only offers significant saving in fuel, energy consumption, and conversion of materials, but also involves lower capital investment per ton of cement and provides solution to ecological problems created by disposal of waste.

The main aim of this experimental investigation was to stabilize the laterite soil by using various percentages of cement stabilizers with sand and to check suitability of the same for construction purpose. 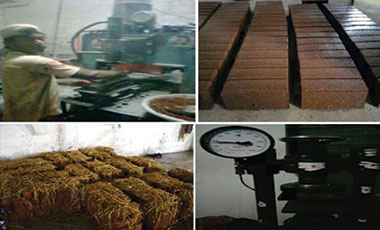 Production of laterite stablized soil bricks, curing and testing
For the production of pressure moulded laterite brick, the 4 kg of laterite soil was taken for each brick, based on the size of mould, soil was spread on clean and flat hard surface, to this known percentage of stabilizer (cement) and sand was added on weight basis followed by thorough hand mixing to get uniform mix, finally potable water (calculated as per optimum moisture content) was added to the dry mix by sprinkling, soil was mixed with water gently but quickly, care was taken to avoid formation of lumps in it during mixing. Entire mixing was carried out in an enclosed area and nearer to the compressing device, to avoid the evaporations of moisture content in the mix and to maintain the workability of wet mix. As soon as the wet mixture was prepared, the homogeneous mix was transported to compacting machine for pressing. The wet mix was placed in known standard size of the moulds and compacted through hydraulic pressure. After compaction, the mould was taken out from the machine by ejection process. Further, brick was lifted carefully from the mould base plate and placed in an open dry place. Since the bricks are not burnt and less initial handling strength, extra care was taken while lifting, placing and stacking of the bricks.

The Hydraulic press paver block and brick making machine was used for the production of bricks. The bricks produced having uniform dimension of 230mm x 100 mm x 75mm. A net load of 10 tonne was applied over cross sectional area of 23000 mm2 of the brick. Since there was a constant compaction effort on all the bricks, there was less variation in strength characters of bricks that are produced and expected advantage of this research work. Because of heavy compaction, the difficulty of brick ejection from the mould may occur due to generation of suction pressure at the corners of mould.

The curing method used in this investigation was “Hay curing”. The paddy straw was spread over bricks, such that it completely covers them. The bricks were cured by sprinkling water gently on straws, thrice a day. The curing was continued for 7, 14, 21, and 28 days based on testing cycle.

The following tests were conducted on stabilized and compacted laterite soil bricks:

Absorption test: The dry weight (Wdry) of the bricks was taken and then it was immersed completely in clean potable water for 24 hours. After 24 hours, the bricks were removed from water and the wet surface was wiped out with a clean cotton cloth and the weight was taken (Wwet) as per IS: 3495- Part (2) -1992 specification. The absorption was given by the relation,

Five bricks per set were taken and the average of five results was considered as ‘Water absorption’ of the bricks. The results were tabulated in Table No.4 to Table No.10

The following Table No.4 to Table No.10 gives the test results of stabilized and compressed laterite soil bricks produced from various combinations of laterite soil + sand + OPC.

Based on the experimental results and observations, the following discussions and conclusions were made in comparison with traditional (red clay) burnt bricks.