During the 1994 Northridge earthquake, moment connections in steel moment resisting frames (SMRF) suffered unexpected brittle failures in and near the heat-affected zones. A lot of damage of lives and property was observed during this earthquake. Many industrial steel buildings were severely damaged during this disaster. A number of various studies have been carried out in order to improve the seismic performance of the conventional welded connections since then. Two key concepts have been developed for better performance of connections: strengthening the connection and weakening the beam flange connected to column, in order to avoid damages of the respective column.Reduced beam section moment resisting connections are among the most economical and practical rigid steel connections developed in the aftermath of the 1994 Northridge, earthquake.The reduced beam section protects a welded Steel moment resisting frame connection detail by forcing the plastic hinge in a beam to form away from the column face. Recommendations for design and detailing of RBS connection are given in Federal Emergency Management Agency (FEMA) 350–351, 355-D [1–3] and ANSI/AISC 341-10 [4], American Institute of Steel Construction (AISC) ANSI/AISC 358-5 [5], ANSI/AISC 360-10 [6] provisions.

To establish a design procedure for using the RBS beam-to-column moment connection without CP, Adam S M &Revelry L D [7, 8, 9, and 10] tested such connections. They observed that heavier shallow columns are able to satisfy the requirement for prequalified use without continuity plates, while lighter and deeper column specimens at a point of instability as defined by column flange twisting and lateral torsional buckling. It was observed that, elimination of continuity plates in RBS moment connections can provide material and labor cost reductions for steel moment frame construction.

RBS special moment frame connection is considered for the study. The ANSYS 16.0 Workbench structural analysis software is used for the finite element analysis. SOLID45 element from ANSYS element library is used for the 3-D finite element modeling of the reduced beam section moment connection. The element is defined by eight nodes having three degrees of freedom at each node: translations in the nodal x, y, and z directions. The element has plasticity, creep, swelling, stress stiffening, large deflection, and large strain capabilities. In this modeling both ends of column are considered as hinged. In the ANSYS model, the beam to column element connection is also configured as being fully restrained. In the finite element analysis, for monotonic loading, beam tip displacement of 0.04 drift angle was applied and von Mises stress are studied.

When subjected to the forces resulting from the motions of the design earthquake: Special moment frames are expected to withstand significant inelastic deformations (drift angle of at least 0.04 radians). Therefore at drift 0.04, observations were noted. It was observed that, in the connection without continuity plate, stresses are above yield in panel zone as well as in the column flange adjacent to beam. Also in some cases local buckling of column flanges was observed.

It was observed that the use of continuity plates in the column panel improved the connection performance. Continuity plate helps to stiffen the column flanges & resist local buckling. Observations for the connections with CP with half thickness of beam flange & with same thickness of beam flange: a) the column panel zone stayed in the elastic range as white wash stayed intact, b) Column flange buckling was not observed, c) Stresses in the RBS area only were above yield limit, d) beam flange buckling was not observed.

In this research, behavior of reduced beam section moment connection with varying thickness of continuity plate is studied with respect to Indian profiles. Analysis of thirty six models was in ANSYS software.

FEM analysis was carried out for sections with relatively small size. Connection behavior may differ for large size sections. Experimentation is required for further validation. 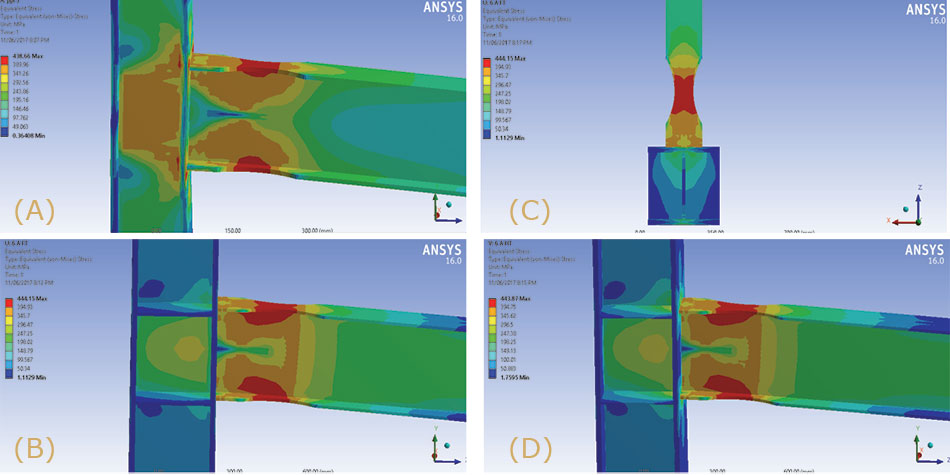