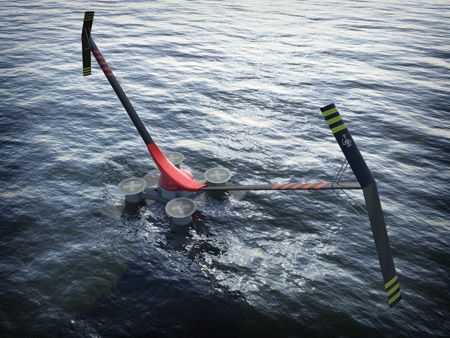 British company Wind Power Limited has unveiled the latest embodiment of its Aerogenerator project, visualized by architects Grimshaw and designed by Arup, a British engineering firm. Arup’s design for 10 MW Wind Turbine, Aerogenerator X is inspired by floating oil platform technology and mimics a spinning sycamore leaf. For the detailed design of the Aerogenerator that can rotate on its axis and would stretch nearly 275m from blade tip to tip. Arup has to work with an academic consortium backed by blue-chip companies including Rolls-Royce, Shell and BP. It is expected that the first machine will be built by 2013-14 following two years of testing. 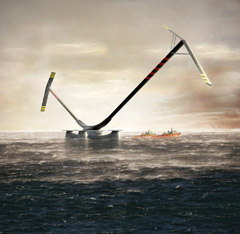 As per the Wind Power Ltd, Offshore vertical axis wind turbines offer the potential for a breakthrough in offshore wind energy availability and reduced life-cycle costs due to their inherent design characteristics of few moving parts, insensitivity to wind direction, and the placing of the generator at base level. In the case of the Aerogenerator, its relatively low centre of gravity and overturning moments make the turbines highly suitable for offshore installation. In addition, they are potentially ‘radar’ friendly compared to existing horizontal axis wind turbine technology.

The technology to develop large-scale vertical axis wind turbine suitable for offshore was founded by enthusiast and innovator Theodore Bird in Suffolk, UK. He was also the founder of Wind Power Limited. The Aerogenerator turbine is particularly suited to offshore operation due to its scalability, low centre of gravity, insensitivity to wind direction and ability to float cost effectively. The Aerogenerator project has won a number of prestigious awards.

Speaking at the unveiling of Aerogenerator X John Roberts, Director at Arup, said: “Despite the installation of a number of large wind turbines offshore, the problem of increasing capital cost for deeper water remains unsolved as does the issue of safe operability in the marine environment. There is a tremendous opportunity for new ideas to make a difference to the commercial viability and operability of offshore wind power. More cost-effective solutions will be essential if offshore wind power is to make the ‘hoped for’ contribution to the UK’s GHG emission reduction targets”.

Professor Feargal Brennan, Head of Offshore, Process and Energy Engineering at Cranfield University, said: “Upsizing conventional onshore wind turbine technology to overcome cost barriers has significant challenges, not least the weight of the blades, which experience a fully reversed fatigue cycle on each rotation. As the blades turn, their weight always pulls downwards, putting a changing stress on the structure, in a cycle that repeats with every rotation – up to 20 times a minute.

“In order to reduce the fatigue stress, the blade sections and thicknesses are increased which further increases the blade self-weight. These issues continue throughout the device. Drive-train mountings must be stiff enough to support the heavier components inside the nacelle on top of the tower, otherwise the systems can become misaligned and the support structure is also exposed to extremely large dynamic thrust and bending stresses, which are amplified significantly with any increase in water depth”.

Theo Bird of Wind Power Limited said: “Offshore is the ideal place for wind power but is also an extremely tough environment. The US wind researchers who worked on vertical axis projects have always regarded the technology as great to work with at sea because it can be big, tough and easily managed. We are extremely grateful to the ETI who had the vision to help us pick up from where the US left off. By facilitating projects like ours they continue the heritage of great engineering in Britain”.

Neven Sidor, Partner at Grimshaw, said: “The Aerogenerator X embodies the best in innovative engineering in Britain, and continues an illustrious tradition. Grimshaw has great regard for this engineering tradition, and is delighted to help in its realisation”.

Offshore power is widely regarded as the future of renewable energy because the wind is much more reliable at sea, larger machines are possible to transport and install and there is far less public opposition. The market for offshore power is expected to grow to hundreds of billions of dollars a year. Last year the European Wind Energy Association predicted that Europe would increase its offshore wind power from less than 2GW today to more than 150GW by 2030.

Britain, which has little upland space available for large wind farms, overtook Denmark in offshore wind generation in 2008 and now leads the world, with 330 offshore turbines installed. It also has the world’s most ambitious plans to develop wind resources, being committed to installing 12GW of offshore power by 2012. This is the equivalent of 2,500 of the largest 5MW machines presently developed.