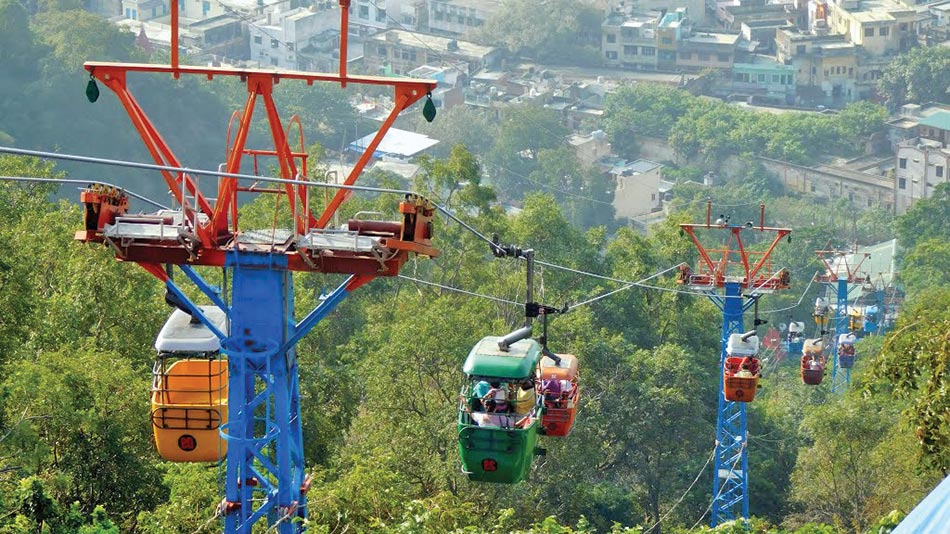 Introduction Advanced transport technologies have improved mobility of men and materials in both normal and specific conditions. Numerous transit technologies have been developed for specific purposes to provide safe, quick and efficient mobility in particular geographical areas. Aerial Rope Transit (cable car/ropeway) is one such technology widely used in areas with topographical barriers, particularly in hilly and mountainous terrains. In Garhwal region of Uttarkhand, apart from ski resorts and tourist destinations, manual and hydraulic cable cars are operational in around 20 locations, and are a lifeline for local residents in a region where roads are sparse and air/train networks are not available (extracted from The Hindustan Times, dated June 27, 2017). Such a system may be promoted in other hilly regions. 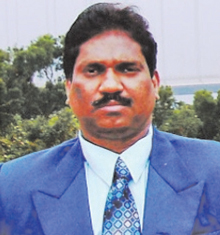 Dr. Pawan Kumar, Town and Country Planning Organization, New Delhi
Cable car transport is considered one of the safest based on the ratio of accidents to the number of people transported per km. The system offers plenty of secondary benefits, which make it the first option in urban transport. However, it is desirable to promote the cable car as a public transport.

The Hon’ble Union Minister for Road Transport and Highways Shri Nitin Gadkari, for declogging traffic congestion on roads, has proposed cable cars or ropeway transport. The tender for the first project, between Dhaula Kuan (Delhi) to Manesar (Haryana), has already been cleared at an estimated cost of ₹50 crore, which may come down to ₹35 crore, once it becomes part of the ‘Made in India’ initiative.

Similarly, Conveyor and Ropeway Services Private Limited (CRSPL) has proposed to introduce Curvo, the world’s first non-linear aerial ropeway for the most traffic congested areas of Kolkata. The ropeway is for second tier urban commutation in two sectors: Sealdah to BBD Bagh area and Howrah to the new State Secretariat at Nabanna. 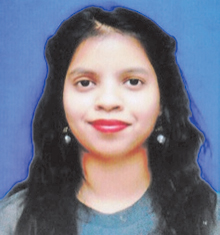 Meenal Jyotika, Dual Degree M.Tech. (Mechanical) Student, Gautam Buddha University, Greater Noida.
Another example is of Dombivli east railway station (Thane District, Maharashtra) to Shil Phata junction road or Manpda road, which has dense traffic and is narrow and congested. This major road is one of the oldest business market places and an important link to the newly developed job destination of Navi Mumbai. The annual average daily traffic on the project road is more than 15,000 PCUs and there is no space available for expansion. Even traffic flow cannot be disturbed for long. Therefore, selection for the most appropriate mode of transport was difficult in such a situation, where horizontal growth is not an option but only vertical growth, where LRT, Ropeway, and Metro-like transits with low right of way (RoW) are feasible. Ropeways are an ideal solution in situations like the Manpada road, and there are many more cable car proposals for different parts of the country.

Aerial Ropeway Transit (ART) or Cable Car System (Ropeway) is known as aerial tram, sky tram, aerial tramway, etc. In India, it is also called Udan Khatola, Gagan Khatola, etc. The cable car is a type of aerial transit to transport passengers in a cabin which is suspended and pulled by cables. It consists of one or two fixed cables (i.e. track cable), one loop of cable (i.e. haulage rope), and passenger cabins. The track cables provide support for the cabins while the haulage rope driven by electric motor provides propulsion (push forward/drive forward).

Similarly, cable car vehicles (i.e. cabins/aerial lifts / chairs cabin, gondolas, etc.) pulled by haulage rope and rotated by a motor off-board, are motor-less, engine-less, brakeless and have no control panels. The aerial cable car transport system moves back and forth on a fixed track with one or two vehicles, whereas, gondola cabins move along a unidirectional loop with declutching mechanism that has a device to allow the gondola to be uncoupled from the haul rope on arrival at the station, and to be attached again to the haul rope on exiting from the station. However, cable car vehicles have different carrying capacity. In a simple system, there may be only one cable car vehicle, whereas, in a complex system, several vehicles are placed at regular intervals along the line.

The cable car is comparatively a safer mode of transport and provides direct connection between two points inspite of physical barriers and obstacles. It demands low space for towers and stations and is considered an environment-friendly and cost-effective mode of transport. It is being used in many cities such as Las Vegas, Oakland, Coblenz (Germany), Istanbul, Rio de Janeiro, Zurich, Singapore, Wellington (New Zealand), London, Mauritius, etc. The selection of such a transport system depends on criteria such as topography and terrains, length (horizontal & vertical), capacity (both cabin & whole system), line speed, operation system (uni-directional/bi-directional), purpose (passengers/tourists/materials), economic viability, operation & maintenance costs, safety of passengers, etc. 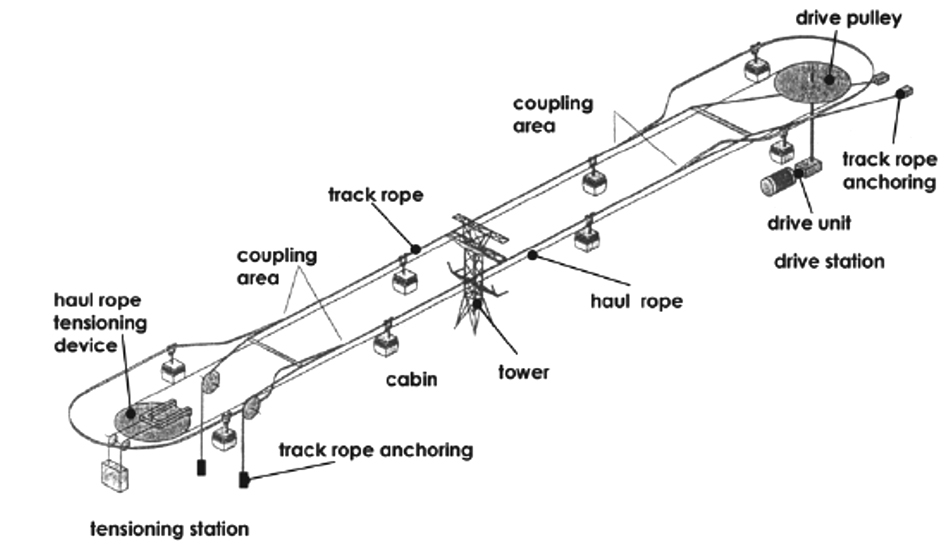 The simplest system of cable car consists of cable(s), cable car vehicle(s), and supporting structure(s). Basically, it is an integrated mechanical system based on principles of mechanics to carry passengers from one elevation to another elevation, particularly in undulating terrains. Figure 1 illustrates running system of detachable bi-cable cable car.

The whole system has two components, broadly: civil works (related to brick/RCC/steel structure, basic facilities for passengers, etc), and the second is installation of plants and machinery to provide mechanical and electrical support in running of cable car vehicles.

Table 1 describes various components of cable car and their functions in mechanical shifting of passengers from one location to other location.

The Cable Car as mass transit is used in developed countries which need specific technologies for performance in specific conditions such as geographical constraint areas to overcome natural barriers, weather/climatic conditions, hilly terrains, etc. In fact, such a system has both advantages and limitations but provides efficient mobility where conventional public transport may not be operated.

The Metro-Cable Car System of Medellin (Colombia) is an example of integrated mass transit. The city of Medellin is located in a valley and is surrounded by hills. The settlements are neither connected by bus nor Metro services. Therefore, a Metro-Cable Car system has been developed to provide complementary mode of transport to the Medellin Metro.

It is planned as a public transport having a ridership of 30,000 passengers per day and is properly integrated with Medellin’s mass transit system. The Metro-cable uses Mono-cable Detachable Gondola (MDG) technology. The first gondola line (Line K) was opened as a complementary mode of transport to Medellin Metro in 2006.

In the Indian context, there is a lot of potential to explore use of the Cable Car as mass transit. The Government departments, transport agencies, cable car manufacturers, etc., should take initiatives to promote the system as an alternative mode of transport and integrate it with the existing mass transit, particularly in the hilly states. 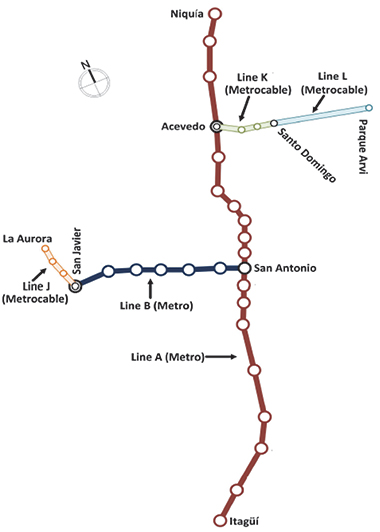 Figure 3: Integrated System of Metro and Metro-Cable, Medellin (Colombia)
Accidents in the cable car transport system may be due to human error, failure of mechanical / electrical components, lack of maintenance of structural system, unsafe environment such as bad weather, volcanic eruption, etc. On June 25, 2017, four tourists and three local persons died when a cable car came crashing down from a height of about 30 meters in the tourist resort of Gulmarg. The tragedy was due to both bad weather conditions and mechanical failure. It was stated that sudden strong winds uprooted a pine tree that hit another large pine tree, whose branch fell on the cable, derailing it from the pulley. The system stopped operation and the cable derailed between the fifth and sixth towers, and the cabins started swinging dangerously, which caused shattering of glass and the passengers were thrown out of the cabin. (source: Indo Asian News Service, Srinagar dated June 26, 2017). Table 2 describes probable causes of accidents of cable cars and their frequency in percentage.

Table 2 indicates that most accidents in cable cars are due to mechanical failure such as slip of cable, fall/malfunctioning of cabin, snapped rope wire, power system failure, collisions, etc., and therefore, complete technical and standard of procedures should be followed in their operation and maintenance.

Discussion and Concluding Remarks
The existing cable car network in Indian cities may be stretched by creating new transport infrastructure. Similarly, the purpose of recreational/tourism may be extended to the mass transit purpose. Therefore, a scientific study is required for proper selection of suitable aerial rope transit with economic viability and geographical feasibility.