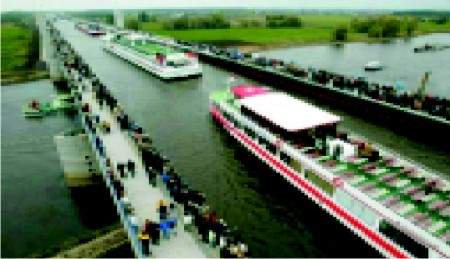 Getting water to where it is needed has been a concern from times immemorial. While early civilizations set themselves up close to water sources, there were difficulties as the settlement spread. Aqueducts or water bridges are architectural wonders that have been addressing the issue of water supply. Although famously associated with the Romans, aqueducts were devised much earlier in the near East and Indian subcontinent where Egyptians and Harappans built sophisticated irrigation systems. Water bridges went a step ahead to allow navigation also.

Bridging the span of time, are two aqueducts both remarkable engineering feats on their own. In the news recently was the 918-meter Magdeburg water bridge in Germany, the longest aqueduct in Europe, connecting the important Mittellandkanal over the river Elbe to the Elbe-Havel canal. At the other end of the time bridge is the Solani aqueduct, Roorkee, India’s first aqueduct.

The inauguration of the Magdeburg Water Bridge in October 2003 marked the realization of an idea conceived way back in 1919. Lost in the turmoil of the World War II and the consequent division of Germany, the project regained its prominence with the reunification of the country. Construction was started in 1998 after a whopping 80 years in planning! 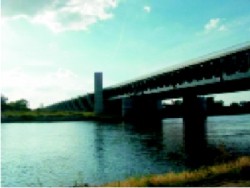 The Magdeburg Water Bridge over the Elbe River links the vital Elbe-Havel Canal and the Mittellandkanal, two of Germany’s important shipping canals that meet near Magdeburg. The water bridge leads to the country’s industrial Ruhr Valley heartland. Often described as a “concrete bathtub” the structure required over 500 million, 24,000 metric tons of steel and 68,000 cubic meters of concrete to build.

The purpose of the project was two-fold -

To overcome the problem of Elbe’s unreliable passage if the river’s watermark fell to unacceptably low levels. Year round East-West traffic is possible for motor-ships and push tows independent of the River Elbe.

Reducing the route by a healthy 12 kilometers. Earlier ships moving between the Midland canal and the Elbe-Havel canal had to detour 12 km through the Rothensee lock, the Elbe and the Niegripp lock. 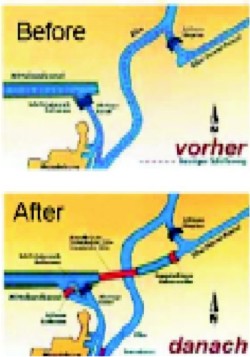 The Wasserstraâenkreuz, as it is known in German, is made of two major parts—a 228 meter long main bridge, which is constructed out of three sections (57.1 meters/106.2 meters/57.1 meters) and a 690 m-long approach bridge with 16 sections. The steel structure was planned by Dillinger Stahlbau GmbH - DSD - Saarlouis; Ingenieurbüro HRA, Bochum; Ingenieurbüro Meyer and Schubart.

The main bridge is a continuous girder and consists of a through bridge and the two exterior main girder boxes. The main girder boxes are divided into 11 constructional sections with lengths from 13.8 meters up to 30 meters. The cross-section consists of the upper boom, the bottom boom, the sides of the through bridges as well as the post and diagonals of the framework.

The approach bridge is also constructed as a continuous girder of 16 sections with equidistant spans of 42.85 meters. The through bottom of the approach is longitudinally oriented as a result of the small spans (7 longitudinal girders). The lateral sides are reinforced at the upper edge with a box girder, which at the same time is a traffic route.

For the steel construction of the main bridge and the construction of the approach bridge respectively 10,000 tons and 14,000 tons of heavy plate type S355J2G3 (Certificate 3.1.C) were used. The plate thicknesses ranging from 10 to 80 millimeters, widths up to 4,500 millimeters and lengths up to 28,000 millimeters were used. About 6,000 tons of the total tonnage was longitudinally profiled plates that is, plates with a continuous variable thickness in the longitudinal direction. 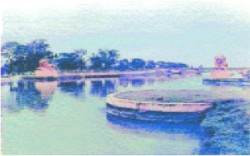 India’s first aqueduct, constructed over the Solani River near Roorkee, came bundled with the construction of the Ganga Canal. The Ganges Canal was both the longest navigation and the longest irrigation canal in the world, with 827 kilometers of dual-purpose waterway from the Ganges to Nanoon, including its two branches, one to Kanpur, the other to Farrukhabad, and a further 740 kilometers of irrigation-only branches. The necessity of this canal was felt after the disastrous amine of 1837-38 that cost the government nearly Rs 10 million in relief work and loss of revenue. The canal’s engineer, Sir Proby Cautley, founded the University of Roorkee as a training ground for canal engineers. This is now India’s famed engineering school. 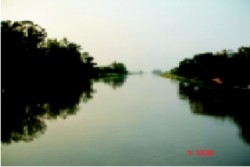 Originating nearly three kilometers downstream from Hardwar, it was completed in 1854 at a cost of Rs 14 million. Still considered to be one of the great irrigation works of the world, it has many firsts to its credit. The longest in India, it was the first irrigation project by the British in North India. The then Governor-General of India Lord Ellenborough aimed for navigation first and irrigation next in the final execution of the project. The construction of the canal also brought with it India’s first rail locomotive, Mary Lind. This was used to bring in clay and materials for construction over the 10 kilometer route between Roorkee and Piran Kaliyar. The locomotive rail paths are still intact.

The most spectacular section is the 27 kilometers downstream from the Haridwar intake to Roorkee, situated in the foothills of the Himalaya, 160 kilometers north-east of Delhi. The canal drops through four 2.7 meter falls, each with a former navigation lock. Two large aqueducts carry the Ranipur and Pathri rivers over the canal whilst the Ratmau River is crossed on the level with an attendant spillway which is opened out during the monsoon.

The Solani River, an intermittent stream, was crossed on a magnificent arched aqueduct ornamented with lions and with approach embankments over 2 miles long. The aqueduct was built 175 feet wide — 150 feet for the canal itself, the rest for a two-lane road and railings. The 980 feet long aqueduct consisted of 15 spans of 50 feet each separated by 10 feet wide piers, the trough being 175 feet wide.

Stones sunk nearly 20 feet under the bed of the river support the arches, and the work was done so well that upon removal of the ‘centering’ (the wooden frameworks used in constructing the arches) the keystones sagged only an eighth of an inch. Over 11 million cubic feet of masonry, 85 million bricks were used in the aqueduct. The frontispiece showed two elegant details: decorative iron railings imported from England and pairs of large stone lions, made locally and placed at each end of the aqueduct.

The Solani river bed consists of sand of average diameter of 0.25 millimeters and carries maximum flood flow of 80,000 cusecs. The channel in this reach runs in filling. The embankments here are about 5 kilometers long and are held on one side by masonry walls, 55 feet high and supported on walls. These are provided on water face with a flight of steps up to 3 feet above canal bed level. To make it strong enough to withstand the yearly floods, the Solani Aqueduct had to be supported on 300 cubes of brick sunk 6 meters below the river bed. The technique of sinking cubes of masonry was one familiar to Indian engineers for centuries.

Keeping up with time

During re-modeling of canal in 1956, the bed was lowered by 6 inches by replacing the old clay bed over laid brick on edge by 3 inches cement concrete.1:2:4 which enabled passing of an increased discharge of 10,500 cusecs.

The World Bank in 1984 agreed to help fund the reconstruction of the canal, known as the ‘upper’ Ganges Canal. The reconstruction of the Upper Ganges system included a new Solani Aqueduct, a bridge of pre-stressed concrete beams. The initial plan was to demolish the old bridge, but the demolishing costs were too high, simply because the work was so difficult—a huge credit to the original construction and design.

Today the old bridge stands nearby—gracefully arched plastered brick neatly dated with a plaque from the 1840s. The decorative iron railings have disappeared and the stone lions have been moved upstream to a new location.

And the winner is…!

In a debate of steel versus mortar or one on the old versus new considering the Solani aqueduct or the Magdeburg water bridge, seems the underlying engineering skills come out the winner! 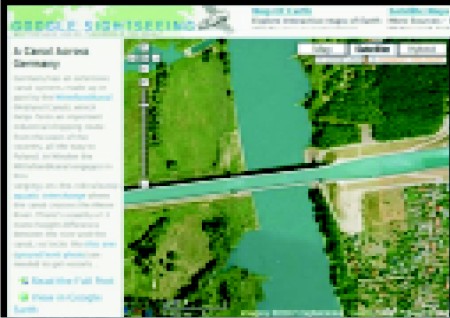 After creating a world record for laying Pavement Quality Concrete (PQC) for a four-lane highway of 2,580 meters length within 24 hours, NHAI has made yet another record by completing a single lane of the four-lane

Ashoka Buildcon, a leading highway player in India, has an impressive portfolio of 39 PPP projects, which is the largest in number in the country. With 40 years of experience in the core business of Highway Construction

Patel Infrastructure, an established construction, development, and maintenance service company and a NHAI contractor, has created a world record in the Infrastructure sector by laying Pavement Quality Concrete (PQC) for