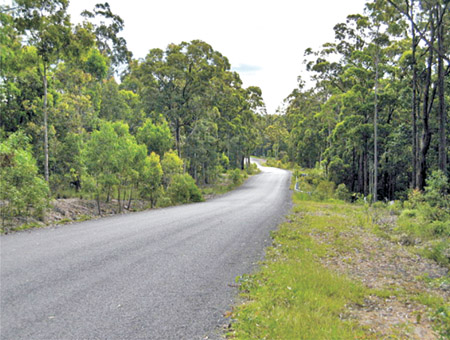 In near future, the cost of bitumen will go on increasing. So, various alternates to construct the roads are to be explored. Though concrete roads are one of the good alternates, but still their use is limited. This paper discusses the merits and demerits of all types of pavements construction and proposes their optimum use.

Development of a country depends on the connectivity of various places with adequate road network. Roads are the major channel of transportation for carrying goods and passengers. They play a significant role in improving the socio-economic standards of a region. Roads constitute the most important mode of communication in areas where railways have not developed much and form the basic infra structure for the development and economic growth of the country. The benefits from the investment in road sector are indirect, long-term and not immediately visible. Roads are important assets for any nation. However, merely creating these assets is not enough, it has to be planned carefully and a pavement which is not designed properly deteriorates fast. India is a large country having huge resource of materials. If these local materials are used properly, the cost of construction can be reduced. There are various type of pavements which differ in their suitability in different environments. Each type of pavement has it’s own merits and demerits. Despite a large number of seminars and conference, still in India, 98% roads are having flexible pavements. A lot of research has been made on use of Waste materials but the role of these materials is still limited. So there is need to take a holistic approach and mark the areas where these are most suitable.

There are various type of pavements depending upon the materials used. A briefs description of all types is given here.


Flexible Pavements
Bitumen has been widely used in the construction of flexible pavements for a long time. This is the most convenient and simple type of construction. The cost of construction of single lane bituminous pavement varies from 20 to 30 lakhs per km in plain areas. In some applications, however, the performance of conventional bitumen may not be considered satisfactory because of the following reasons: Recently, a large number investigations have demonstrated that bitumen properties (eg. viscoelsticity and temperature susceptibility) can be improved using an additive or a chemical reaction modification.

The use of polymer modified bitumen's (PMBs) to achieve better asphalt pavement performance has been observed for a long time. The improved functional properties include permanent deformation, fatigue and low temperature cracking. The properties of PMVs are dependent on the polymer characteristics and content and bitumen nature, as well as the blending process. Despite the large number of polymeric products, there are relatively few types which are suitable for bitumen modification (2). The polymers that are used for bitumen modification can be divided onto two broad categories, namely plastomers and elastomers. Elastomers have a characteristically high elastic response and, therefore, resist permanent deformation by stretching and recovering their initial shape. Plastomers from a tough, rigid, three dimensional network to resist deformation. The thermoplastic rubber, styrene butadiene-styrene (SBS), is an example of an elastomer and the thermoplastic polymer, ethylene vinyl acetate (EVA), is an example of a plastomer. One of the principal plastomers used in pavement applications is the semi-crystalline copolymer, ethylene vinyl acetate (EVA). EVA polymers have been use in road construction for more than 20 years in order to improve both the workability of the asphalt during construction and its deformation resistance in service. Figure 1 to 6 show the effect of these modifiers to bitumen before and after ageing.


Semi Rigid Pavements
The pavements constructed using the waste materials, which are more strong the traditional aggregates may be treated as Semi-Rigid Pavement. A lot of research work has been done in this direction. But the work in terms of real construction is not visible.

Some examples of real construction are given below:

Visakhapatnam Steel Plant (VSP) at Visakhapatnam (AP) is one of the major steel plants producing steel in the country. Granulated Blast Furnace Slag (GBFS) is also generated as a by-products of steel. Prior to 1991, a major portion of GBFS was being used by the cement manufacturing industries located in the nearby areas but its utilization in this industry has been decreasing gradually. This material has, therefore, been piling up gradually due to increased production as a waste in the plant area an posing serious problem for its disposal. Two roads namely Ankapalli-Pudimadaka Road (AP road) – a MDR and Bheemunipatnam-Narsipatnam road (NB road) – a State Highway were selected for test track construction. The existing width of the road pavement was about 3.5m and as per state PWD programme, has to be increased to 5.5m by 1m widening the carriageway on both sides of the road. The pavement thickness worked out to be 425mm for the traffic parameter of 3 million standard axle (msa) for BN road and 480mm for the traffic parameter of 1.25 msa in case of AP road. The pavement compositions were then, worked out considering the strength of GBFS, GBFS subgrade soil/moorum mixes for the two roads.

In another project, Conventional moorum, gravel, sand or lime/cement stabilised local soil were used in subbase layer of a road pavement. In order to compare the structural performance of these materials with the steel industry wastes, a small test track was constructed at Bokaro. The selection of different test sections was made on the basis of laboratory test results as discussed in the previous sections. The details of the test sections are as follow:

In order to structurally evaluate the different specifications/test sections, plate load tests were conducted on each section using a 30cm diameter plate. The load deflection values were recorded by applying incremental load. Plate load test was also carried out on subgrade soil. Since with an ordinary truck, only limited magnitude of reaction can be obtained, a heavy 35 tonnes dumper was used for carrying out place load test. Based on Burmister's two layer theory, the modulus of elasticity for different specifications were worked out and are given in Table-2. The ratings based on load carrying capacity of different sections are also indicated in the same table. 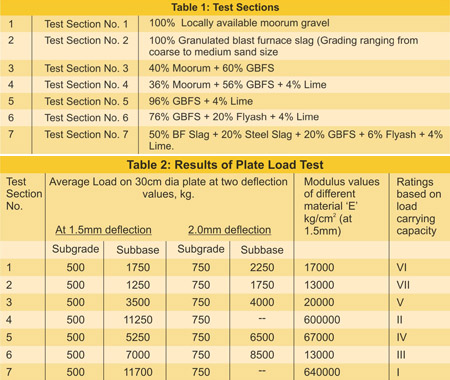 Similarly, Bandamunda Jaraikala road, which is a major district road near Rourkela, was chosen for construction using the waste material from Rourkela Steel Plant. For the experimental test sections on Bandamunda Jaraikala Road, Rourkela. Where 1.8m widening on both the sides of the existing road was proposed, a total number of 11 test sections using steel plant wastes were laid. During rainy season, heavy rains are there and water passes across the road. While formulating specifications, attempts were made to make maximum utilization of steel plant by-product such as BF slag, SMS, granulated slag and flyash, etc. It includes one control test section, which comprises conventional road building materials for comparison purpose. It shows that except right portion of sections 1,2 all sections were structurally sound after two months of construction. 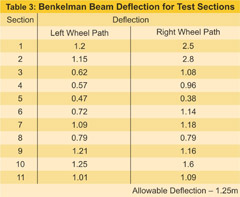 Rigid pavements, though costly in initial investment, are cheap in long run because of low maintenance costs. There are various merits in the use of Rigid pavements (Concrete pavements) are summarized below:

Concrete Pavements-Why and Why Not?

Based on the above discussion, following conclusions are made: