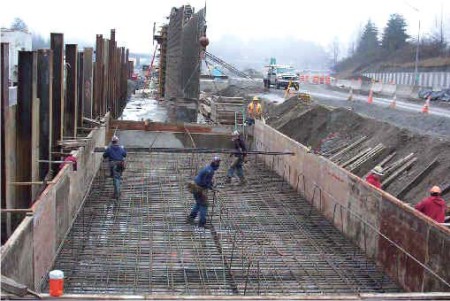 
The performance of a pavement or overlay depends on the engineering properties of the material used in construction. The application of Steel Fibre Reinforced Concrete (SFRC) as composite matrix is potentially advantageous from the point of view of its capacity to bear much higher stresses. Under similar loading conditions pavement thickness can considerably be reduced in SFRC, hence reduction in material and cost. Sound SFRC pavement promises an appreciably higher life expectancy, reduced crack growth offer better serviceability and minimum corrosion.

In this study, an attempt has been made to analyze the mechanical characteristics of the waste steel scrap material which is available from the lathe is used as a steel fibre for pavement construction and to optimize the fiber content. The characteristics compressive strength and flexural strength of M30, M35, and M40 cement concrete for various proportions of steel scraps are experimentally found out. The steel scrap is added in various proportions by weight of the cement.

Fiber reinforcement is highly recommended for situations involving impact and fatigue loading. In this study, the drop weight impact test was used to study the impact strength of Scrap Steel Fibre Reinforced Concrete (SSFRC). Abrasion resistance, an important criterion for the pavement material was also tested. The impact and abrasion resistance of SSFRC has been tested for optimized fibre content of M30, M35, and M40 concrete. The experimental results show that the mechanical properties such as compressive strength, flexural strength, impact strength and abrasive resistance of concrete are found to be increased due to the addition of steel scrap fibre in the concrete. This paper focuses attention on the structural strength enhancement of rigid pavements by using the locally available Scrap Steel Fibre Reinforcement and it is compared with the Plain Cement Concrete (PCC) specimens.

The inclusion of fiber in concrete, mortar and cement paste can enhance many of the engineering properties of the matrix, such as fracture toughness, flexural strength and resistance to fatigue, impact, thermal shock and spalling. The modern use of fibre reinforced concrete started in 1960s using straight, smooth and discontinuous steel fibres.Applications for SFRC are used in floors, pavements and other plane structures where fibres act as crack distributing reinforcement. The fibres may act as shear reinforcement and also improve the capacity of the bars due to increased crack distribution.

As per IRC:SP:46–1997[1] steel fibres are generally 30–50 mm long, 0.5–1.0 mm in diameter and 50 to 100 mm aspect ratio. According to Gopalaratnam (1991)[2] for a given type of fibre, ahigher volume fraction provides more energy absorption capacity or toughness as long as the fibres can properly be mixed and the composite can be cast and compacted properly. This result should be expected because more fibres provide more resistance, especially in the tension zone. For the given fibre geometry, longer fibres typically provide greater toughness. Balasubramanian et al. (1996)[3] have investigated the impact resistance of the specimens with 0.5%, 1.0%, 1.5%, and 2.0% for each of the three types of steelfibres (viz. straight, crimped andtrough shaped) using Schrader’s test Device. Addition of 0.5% of steel fibres resulted in 3.5 times increase in the number of blowsrequired for failure. Further increase in fibre percentage increases the impact resistance of composites. Crimped fibres give consistently higher impact resistance.

N.Banthia(2002)[4] examines the two major issues related to impact loading on plain and fiber reinforced concrete. It was found that the machine parameters strongly influence the observed material response to impact. Results appear to be far less sensitive to the mass of the hammer than to the hammer drop height. Crimped polypropylene fiber is less effective than steel fiber at quasi state of loading but at higher stress rates, it performs better than steel fibre. Ravishankar (2006)[5] investigated the mix design aspects of steel fibre reinforced concrete and concluded that there is an increase of 42% in modulus of rupture due to addition of fibres in plain concrete. K.Shankar [6] investigated that the addition of scrap steel fibre beyond 1.5% decreases the flexural strength of the FRC.

The main objectives of this study are:

Materials Used in the Investigation and their Properties 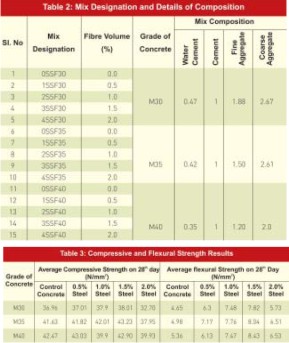 Chettinad brand Ordinary Portland Cement (OPC) 43 Grade confirming to IS: 4031-1988. Locally available river sand confirms to Zone II of IS: 383-1970 as fine aggregate, Crushed granite aggregate of maximum size 20 mm confirming to IS: 383 as coarse aggregate and Potable water are used. Steel Scraps of length 25 mm to 30 mm, width 1.5 to 2 mm and thickness 0.3 to 0.4 mm which is obtained from the lathe machines as waste or by product are used as reinforcing material in the concrete. Super plasticizer – Conplast SP432 MS supplied by M/S FOSROC India Private Ltd. Is used to improve the workability of the concrete. The dosage of super plasticizer to be added with the concrete is found out from the slump test conducted in the laboratory.

The physical properties of the material used to prepare the fibre reinforced concrete mix are tabulated in Table 1. 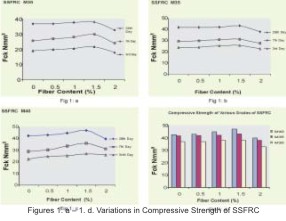 For this investigation, the mix design for M30, M35 and M40 concrete are designed by American

Concrete Institute Method of Mix Design (ACI) and the mix proportions used for the investigation is given in Table 2.

The compression and flexural strength of the cube and beam specimens are tested respectively. 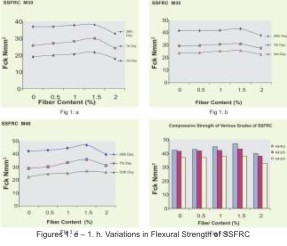 Behavior in Compression and Flexure

Extensive research had indicated that there was no appreciable change in the linear part of the stress-strain curve in compression when randomly oriented fibres are added to concrete in different volumes. The variation in compressive strength and flexural strength of SSFRC compared to control concrete with respect to the fibre content is shown in the Table 3 and Figures.1. a

It is observed from the Table 3 and Figures 1.a, 1.b, 1.c and 1.d, the addition of fibres in the concrete increases the Compressive Strength but which is not very significant. In M30 concrete 0.5% steel dosage shows 0.135% of higher strength than control concrete and 1.0% and 1.5% steel dosage shows 2.54% and 2.84% higher strength than control concrete respectively but at 2.0% of steel proportion decreases the compressive strength. In M35 and M40 grades there is an increase in compressive strength up to 2% of fiber dosage. From the experimental results, it is observed that to get higher compressive strength, it is desirable to use 1.5% of steel scrap dosage.

Impact and Abrasion Resistance of SSFRC

Toughness is defined as the total energy absorbed prior to complete separation of the specimen. A cylindrical specimen of 150 mm diameter and 62.5 mm thickness is prepared with optimum dosage of steel fibres in three grades of concrete. The equipment consists a standard manually operated 4.55 kg compaction hammer with 423 mm drop. A 62.5 mm diameter hardened steel ball and a flat base plate with positioning bracket similar. The drop hammer is placed with its base upon the steel ball and held vertically. The hammer is dropped repeatedly and the number of blows required for the first visible crack to form at the top surface of the specimen and the ultimate failure are recorded. The impact test results are given in Table 4. and Figure 4.

From the Table 4 and Fig. 4, it is observed that M35 concrete requires more number of drops for failure when compared to M30 and M40 grade of concrete forboth SSFRC and control concretespecimens. In all the three grades of concrete SSFRC shows increased impact strength (energyabsorption). The failure of the specimens under impact is shown in the Figures. 5 and 6.

This equipment is specially developed by the Department of Transportation, Engineering Service Centre, California [7]. The test specimens shall be cylindrical in shape, 100 ± 1 mm in diameter and 50 ± 3 mm high. They shall be soaked in water for a minimum of 2 hours prior to testing. The abrasion loss in grams is calculated by subtracting the mass of the saturated surface dry specimen after the test from the mass of the surface dry specimen before test. The results of the abrasion test are tabulated in Table 5.

From the experimental studies and subsequent pavement analysis carried out as per IRC: 58-2002, it is concluded that the compressive strength of SSFRC increased when compared to plain cement concrete. Addition of steel scraps increases the flexural strength of SFRC to great extent. 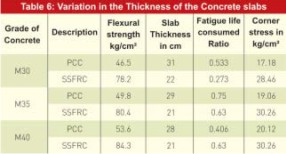