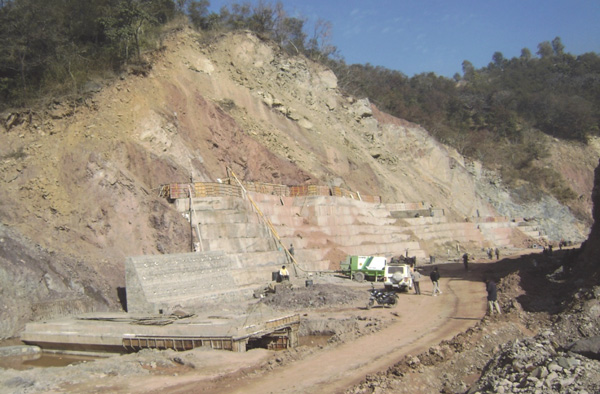 NH–22 connects the states of Punjab, Haryana, and Himachal Pradesh. In this road, Zirakpur to Parwanoo stretch (length 17.5 km) has now been four-laned. A part of this four lane road has been constructed along new alignment, which is in hilly terrain involving extensive slope cutting up to 25 m height. Geologically, this area comes under Siwaliks. The rocks along new alignment of this road comprise mainly of shale, slate, sand stone, conglomerate and to small extent quartzite. These rocks in general are high to moderately fractured and weathered. Prominent weathering can be observed in shale, slates and sand stone, due to which suitable slope protection measures are required to prevent occurrence of landslide/ rockfall. At the request of project authorities, CRRI undertook a study to evaluate and advise regarding rockfall protection measures to be adopted at critical locations in this stretch. This paper provides highlights of the study at two locations investigated.

Slope stability is one of the most common problems in hill slopes, high embankments and opencast mine slopes. Transportation corridors in hilly regions are highly susceptible to landslides and rockfalls. Several types of mass wasting problems like landslides, rockfall, debris flow, debris slide, surface erosion, etc., frequently occurs in the hill areas of our country. Of these, rockfalls constitute a major hazard in numerous rock cuts along roads in mountainous regions leading to casualties, as well as many accidents. Rockfall can be defined as the natural downward motion of a detached block or series of blocks of rocks resulting in free falling, bouncing, rolling, and sliding of detached blocks. Unfavourable geology and climate are the principal reasons for rockfall. Causative factors include condition of the rock mass, discontinuities within the rockmass, weathering susceptibility, ground and surface water, freeze-thaw, root-wedging, and external stresses. Rocks falling from the cliff may dislodge other rocks and create another mass wasting process, for example an avalanche. Under the present technological state, it is extremely difficult to accurately predict time of rockfall or its falling path. Consequently, disaster prevention has to be attempted through designing suitable protection facility. Typically, rockfall events are mitigated in one of two ways: either by passive mitigation or active mitigation. Passive mitigation is where only the effects of the rockfall event are mitigated and are generally employed in the deposition or run-out zones, such as through the use of drape nets, rockfall catchment fences, diversion embankments, etc. In such situations, rockfall still takes place but attempt is made to stop it from reaching the roadway. In contrast, active mitigation is carried out in the initiation zone and prevents the rockfall event from occurring. Some examples of these measures are rock bolting, slope retention systems, shotcrete, etc. Other active measures might be by changing the geographic or ground water conditions in the initiation zone, e.g. altering slope geometry, dewatering the slope, re-vegetation, etc.

CSIR-Central Road Research Institute (CRRI) has been taking up many landslide investigation/ rockfall mitigation studies in the hilly regions of our country since last few decades. Four laning work of Zirakpur-Parwanoo Road project in NH-22 involved construction of bypasses to provide alternate routes to existing congested road sections passing through towns like Kalka. Such bypass section of this new alignment is being constructed in hilly terrain involving embankment construction of height upto about 20m and slope cutting upto 25m. Suitable slope protection measures are required in hill cutting sections to prevent occurrence of rockfall/ landslide.