Mr. Rajinder Raina, General Manager-Marketing, Escorts Construction Equipments (ECE) highlights the yawning gap between the government’s ambitious plans for the roads and highways sector and the poor execution of the projects by the contactors.

The Government of India recognised the importance of roads,in the real sense, in early 2000 when the then Prime Minister Sh A.B.Vajpayee,office, took direct charge of the Ministry of Roads & Highways for regular monitoring. This brought about a transformation in the importance of roads and highways for nation building was perceived across the country, and the rest, as they say, is history.

Unfortunately, the UPA II government did not do enough to keep the momentum going, as a result of which, the road sector experienced a slowdown. This adversely affected the businesses of the EPC contractors and equipment manufacturers involved in road construction.

The current dispensation has earmarked suffiecient funds for construction of roads and highways by the concerned Ministry to put the focus back on development, expansion and reconstruction of roads, so much so, that in the last two years alone, the average road construction crossed 25 kms/day. This was made possible by addressing certain pertinent issues and incorporating clauses, such as the exit clause, for the construction companies that were awarded projects.

In the past, many EPC contractors and joint venture companies working on the PPP model suffered losses both on their financial and reputation front due to non-receipt or late receipt of governmental approvals and clearances. Understandably, they became reluctant to partner with the Ministry of Roads & Highways for new projects. However, when the government came up with the Hybrid Annuity Model (HAM), it helped rope in several reputed CE and contracting firms to take the plans forward.

Having put the mechanisms, systems and clauses in place, the ministry is confident of achieving its target of constructing 40kms/day. To ensure this, project works must be awarded regularly to the contracting companies.

We now move on to the next level of advancement and growth with the concept of Smart Cities connected by Smart Roads. India is on road to ‘road development 2.0’, from highways & expressways to Smart Roads. The design and methodologies of these roads must provide for advanced mechanisms and installations such as reflective and solar studs, animated sensors, retro reflective signage for safe and free flow of traffic at high speed, and other safety measures.

All of this will entail an advanced technology-driven traffic management system that includes an SOS calling facility for emergencies on these roads; latest systems for signalling, hassle-free toll collection, accident management, and energy-efficient, high-powered lighting such as solar lighting.

Given the high traffic density and mix of vehicle types on our roads, it is important to ensure timely and safe mobility of humans as well as goods. After all, Smart Cities must be connected by Smart Roads if we are to progress. 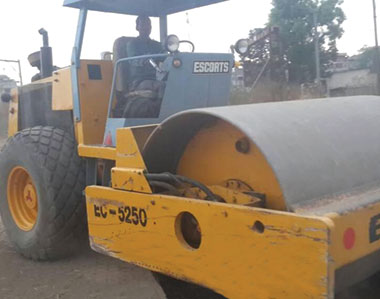 It would be germane to this article to flag one of the biggest issues of road construction in India, which is, non-compliance to the SOPs. This issue was brought up earlier too by me with the example of the ongoing DARP-Delhi Agra Road project. I have been keenly observing the execution of this project, particularly the stretch between Badarpur – Ballabgarh – Prithla. From the excavation stage to the road construction material being used, the layer thickness and quality of manpower, everything that we observed is below par.

The road construction equipment such as the vibratory compactors, motor graders, asphalt compactors, etc, all are used arbitrarily. Bitumen laying has no temperature monitoring. There is hardly any professional supervision available at the site for making corrections or improvements at different stages of the construction. The quality of elevated corridors/junction crossings along the route are very ordinary, and the one at Ballabgarh is even inferior in quality and design. Should have been executed in a much more professional manner.

We strongly feel that a team of experts should conduct a detailed inspection of the entire stretch and bring forth its findings so that timely action can be taken to reconstruct where ever necessary. In India, we have the most modern technology and equipment for road construction. The methodology is also clearly laid out, but it is not being adhered to. The roads will be built, but the worrying question is whether they will provide the desired service life.

There are many prestigious projects underway across the country, but the authorities must ensure that they meet international standards. In our opinion, the capability is there, but true intent at the execution level is lacking. Roads and highways are the lifeline of the country to transport man and material to the farthest corners in quick time in a safe manner. It’s time we got our act together to create a network of world-class roads and highways that will serve us for a long time to come.