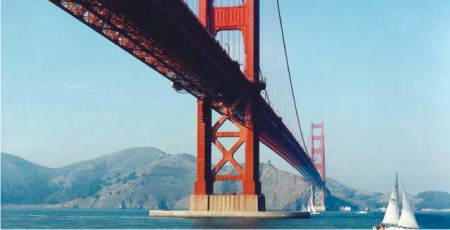 Occurrence of earthquake is no more a rare eventuality. India has witnessed several major earthquakes, involving substantial loss of lives. To name a few, a major earthquake (Richter scale 8.5) occurred in Assam in 1897 wherein the reported death toll was 1500. It was repeated at the same place in 1950 with similar number of reported deaths. Similarly, in 1934, major earthquake (Richter scale 8.4) occurred in Bihar-Nepal border area claiming 14,000 lives. It was repeated in 1988 claming about 1000 lives. The most recent major earthquake (Richter scale 8.0) in Bhuj claimed over 20,000 lives. By and far, major earthquakes have been observed to repeat in about 50 years in high earthquake prone areas. Comparatively, a larger number of bridges have been affected by seismic activities in America and Japan than those in India. Latur earthquake in 1993,did wake up the authorities to survey the bridges in Maharashtra area, retrofit and rehabilitate those bridges. Golden Gate Suspension Bridge, San Fransisco has been another example of Earthquake Retrofitting. Technique of retrofitting is not unique or predefined. It has to be decided on case to case basis, depending upon the prevailing circumstances. 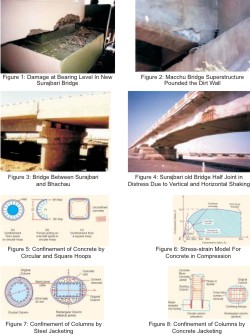 Quite often, damage is noticed in and around the bearings due to stress concentration at these locations. Figure 1 shows an example of such damages even in a newly constructed bridge. Bearing has always been said to be a week link between massive superstructure and the substructure. Similarly Figure 2 shows that the superstructure of another bridge pounded the dirt wall, due to excessive longitudinal movement. Figure 3 shows damage of short vertical cantilever attached to the pier cap provided to negotiate difference of depths of the two adjoining superstructures. This happens due to formation of plastic hinges and lack of dissipation of earthquake energy at these locations. Similarly, Figure 4 shows damages of L-shaped superstructure at the half joints provided to house the hinge bearing.

Possible causes of deficiency in a bridge can be broadly the following:-

Seismic forces cause plastic hinge formation and overstressing at specified locations, such as pierfoundation junction, piersuperstructure junction in case of integral bridge, etc. For all such conditions, the pier cap can be confined to substantially enhance the performance during ultimate load conditions, see Figures 5 and 6. Figures 7 and 8 depict detailing for strength enhancement through addition of steel and concrete respectively. The additional concrete of the pier needs to be adequately anchored to the corresponding foundation.

Concrete portals are commonly connected to the superstructure either through bearings or integrally. In such cases, the seismic force carrying capacity of a portal can be enhanced as depicted in Figures 9 and 10.

In the seismic conditions, foundations need to be strengthened both for downward load and uplift. Figure 11 depicts the use of additional piles to increase downward load capacity of pile foundation and the use of Passive Ground Anchors for prevention against uplift. Figure 12 depicts increase of structural strength of foundation by additional concrete and addition of prestressing after drilling hole into the foundation and grouting it after the application of prestress.

Seismic forces experienced by the bridge can be substantially reduced by addition of vertical concrete upstands from the pier/ abutment cap and sandwitching flexible material, such as elastomer. Figures 19 and 20 depict the system of such an arrangement. In this arrangement, the vertical elastomeric bearings need to be detailed in a specialized way, wherein, the mating surface between the fixed side and the moveable side is made into stainless steel, in order to reduce sliding friction. For anchoring purpose a mild steel plate vulcanized on the surface of the bearing, as shown in Figure 20 is provided. Figures 21 and 22 depict an isometric view and photograph of such concrete upstands that receive the vertical elastomeric bearings. The elastomer acts as isolator by substrantially increasing time period of the structure, thereby reducing the seismic forces experienced by the structure.

The other method of strength enhancement is to provide fiber wraps. Mainly there are Carbon Fiber Wraps and Glass Fiber Wraps. These fiber wraps exhibit low creep and elongation and compared to steel, they are thinner, lighter and have up to 10 times and tensile strength capacity. Since, these wraps have unidirectional tensile capacity, they have to be carefully provided in direction, strength enhancement is desired. In case both shear and flexural strengths are required, two layers of the wrap perpendicular to each other are provided, refer Figures 23 and 24 for examples of fiber wrap application.

Method of seismic strengthening of bridges is a case specific matter. Depending upon the requirements of a particular location, the system of strengthening of superstructure, substructure and/or foundations has to be decided. An attempt should be made to reduce seismic demand by providing seismic isolators/dampers or increasing flexibility of the structure, provided they do not impare efficiency and functionality of the bridge. Confinement of core of piers using concrete jacket or steel jacket is an effective method of strength enhancement. When reinforcement has to be added, reinforcement couplers and rebar fasteners turn out to be useful items of structure. All the bridge components need to be investigated for strength enhancement.