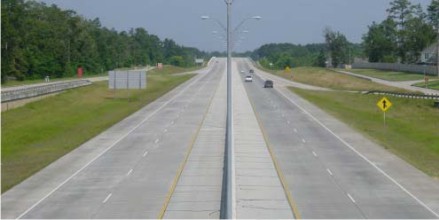 
Fiber reinforced concrete is defined as a composite material consisting of concrete reinforced with discrete randomly but uniformly dispersed short length fibers. The fibers can be made of steel, polymer or natural materials. Woven fabrics, long wires, bars, and continuous wire mesh are not considered discrete fibers.

Fibers generally used in cement concrete pavements are steel fibers and organic polymer fibers such as polypropylene and polyester.

Providing and laying 40 mm steel fiber reinforced cement concrete in pavement (in panels having area not more than 1.5 sqm) consisting of steel fiber @ 40kg per cubic meter of concrete and cement concrete mix of 1:1.95:1.95 (1 cement: 1.95 coarse sand of fineness modulus 2.42: 1.95 stone aggregate 10 mm and down gauge of fineness modulus 5.99) over existing surface i/c cement slurry, consolidating, tapping, and finishing but excluding the cost of steel fibers which shall be paid separately, complete as per direction of Engineer in Charge (Cement to be used shall be OPC 43 grade and sand and aggregate have to be washed).

Second item of fibers was provided separately as “Providing and mixing steel fibers of dia 0.45 mm in cement concrete duly cut into pieces not more than 25 mm in length.” 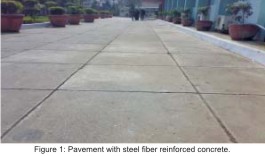 Though the item of steel fiber reinforced concrete has been provided with a design mix of concrete, which is almost of 1:2:2 grading, it can now be used of mix like M30 or M35. Since in the executed item, the thickness was to be restricted, the stone aggregates used were of 10 mm size and below however, in case of the concrete of more than 75 mm thickness, stone aggregates of 20 mm grading can be used.

The construction was carried out more than a decade back. It isobserved that the performance of the concrete is satisfactory even after many years of construction (Figure 1). Even, no corrosion has been observed in the steel fibers. In fact the concreting has been done just like flooring item in this case over already existing hard surface. In such a case a bonding coat should also be provided like a coat of cement slurry. The fiber reinforced concrete has been provided in small panels considering the workability. Though vacuum dewatered concrete has not been done with steel fiber reinforced concrete but the same is also possible. Vacuum dewatered concrete, though cannot be done in small thickness like 40 or 50 mm but can be used if thickness is 100 mm or more. 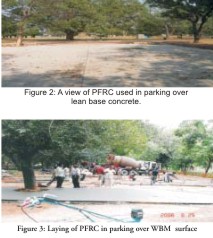 Polymeric fibers are being used now because of their no risk of corrosion and also being cost effective (Sikdar et al, 2005). Polymeric fibers normally used are either of polyester or polypropylene. Polymer fiber reinforced concrete (PFRC) was used on two sites with ready mix concrete and Vacuum dewatering process.

The nomenclature can be used in the works as given here.

"Providing and laying ready mix fiber reinforced cement concrete of M35 grade (The concrete shall also have minimum works test beam flexural strength of 40 kg per sqm at 28 days) in required slope and camber in panels i/c shaping at drainage points as required using cementitious materials not less than 435 kg per cu‎m of finished concrete from ACC/L&T/AHLCON/ UNITECH or equivalent batching plant for all leads and lifts with Fibercom-CF/Fibermesh/Recron or equivalent (100 % virgin synthetic fiber size 12 mm long) to be mixed @ 900 grams per cu‎m of concrete i/c finishing with screed vibration, vacuum dewatering process, floating, trowelling, brooming and normal curing etc. complete as per standard manufacturer’s specifications and as per direction of Engineer’s in charge (All related equipment shall be arranged by the contractor. Cost of centering, shuttering, grooving etc. shall be paid separately. Design Mix shall be got approved from the Engineer in Charge).

When dewatered concrete it has no problem of water being coming out on surface during compaction process but when it is done over WBM, a lot of concrete water is soaked by WBM and thus the concrete loses the water to WBM and the water which comes out during dewatering/compaction process is not in same quantity asin case of lean concrete. It appears that it is better to provide base concrete than WBM as the base. The groove was made in one case before setting of concrete and also panels were cast with expansion joints in one direction. No cracks were observed in the direction in which expansion joints were provided assuming this is longitudinal direction. In lateral direction, no joints were provided and the width of such panel was about 12 m. It was later observed that cracks have developed in this direction (Figure 4). 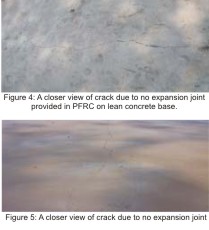 As it is known that the width of 12 m is too long for expansion/ contraction. It has been observed that almost at about one–third of the panel width, such cracks developed i.e. size of panel from one side is about 4 m and from other side it is about 8m. From the site observation, it is therefore inferred that the panel should have the size of about 4m x 4m in the temperature conditions of Delhi however small variation can also be made as per site conditions. In other case, the contractor delayed the cutting of grooves and thereafter the area was occupied due to some urgent requirements, the cracks in both the directions developed. The cracks were almost in line. Later on the grooves were made through cutters. It has been observed that the distance of cracks in one side was almost near to 4 m and on other side at about 7 to 9 m (Figure 5). Thus from this case study also, inference can be made that grooves if made in panels of 4m x 4m, it would be appropriate.

In both the cases, no lateral grooves were made, as working was not a problem due to use of vacuum dewatering process. In both the cases, horizontal line cracks have been observed indicating that the grooves in other direction are also essential. From this, it is imperative that polymer fiber reinforced concrete should be laid in panels or grooves should be provided so that concrete acts like in panels. Cutting grooves is easy as it can be made after casting of the concrete. But it should not be delayed for long and should be made before concrete achieves its desired strength. The size of panels may be kept around 4m x 4m.

Fiber reinforced concrete has advantage over normal concrete particularly in case of cement concrete pavements. Polymeric fibers such as polyester or polypropylene are being used due to their cost effective as well as corrosion resistance though steel fibers also work quite satisfactorily for a long time. It appears that fiber reinforced concrete should be laid on base concrete of lean mix such as 1:4:8 cement concrete rather than over WBM and provided with grooves in panels of about 4m x 4m to avoid expansion/ contraction cracks. Grooves can be made after casting of concrete through cutters.