No Fine Concrete:Possibilities of Use in Indian Conditions 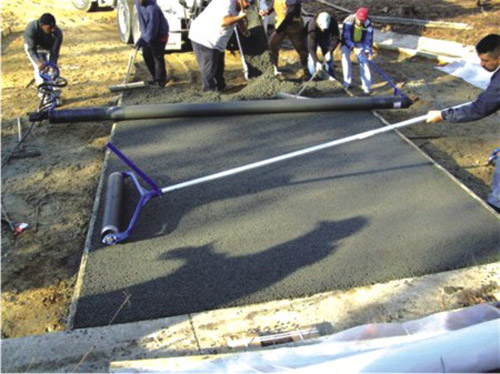 No fine concrete, (NFC) an innovative/modified form of cement concrete (also known as pervious concrete) is a environment–friendly and lower cost material which can be used for the construction of several types of structures with great advantages. Low loading intensity parking pavements, footpaths and walkways have been built on a large scale in many developed countries and their performance has been found excellent. Recognized as the best management practice by US Environment Protection agency (EPA), it is capable of controlling first flush pollution and storm/rain water overflow by allowing the received water to percolate down to earth and then seeping down to the ground water table. In parking lots where spillage of oil/coolants/antifreeze etc is a regular affair and the NFC collect and arrest these things during rains/flooding/washing etc. Preventing their washing off into streams, rivers and water ponds/tanks and polluting these valuable water sources. The arrested polluted water percolate into the ground and soil chemistry and biological elements in soil take care of these naturally. It also reduces the runoff from the pavement areas hence reduce load on drainage systems.

India is facing a typical problem of ground water table falling at a fast rate due to reduced recharge of rainwater into subsoil and unplanned water withdrawal for agriculture and industry by pumping. NFC if adopted for construction of pavements, platform/walkways, parking lots designed for lighter load, can help in improving recharging of rainwater. It can be– come a component of rainwater harvesting schemes being propaged by Government of India on a Priority basis.

The color of this concrete, is light grey having far less absorption of solar heat when compared to the black bituminous pavement concrete. NFC has large open pore structure hence less heat storage and faster cooling thus lower heat island effects and much favorable environmental conditions for trees and plants planted adjoining in parking areas and city side walkways. Though no heavy traffic is allowed on such pavements but these pavements are still safe during rainy season and at night as their surface do not reflect light and is perfectly non skidding during wet weather conditions.

Cement concrete is a composites material made ofThe mix for NFC will have all other components except the Fine Aggregate or the sand will have only a very low percentage. The water quantity is also minimal but controlled hence there is very low slump Figure 1.

The process of mixing, placing and vibrating generally remains same but it needs very high degree of controls in mix proportioning, water–cement ratio and during transportation. From aggregate to aggregate bonding is vital and the cement slurry mixed with chemicals is the key to this effect. In case the water added is more than the desired slurry will have a running down effect leaving aggregate particles unbonded resulting poor quality, and poor abrasion resistant concrete which will not set in place. Hence design mixed NFC can best be produced in RMC plants and then transported to site. Efforts to produce site mixed NFC have not been very successful in most of the cases.

NFC is a performing engineered concrete produced using controlled amounts of aggregate, water cementitious materials, and chemical admixture to create a mass of aggregate, particles covered with a thin coating of paste and bonded to each other firmly.

Durability and Strength of NFC

Field experience in many countries have confirmed that it is a highly durable and strong structural material. Properly constructed NFC Pavements for parking areas and pathways will serve for a period of at least 25 to 40 years. Proper compaction and curing is essential and makes it better.

There is very small amount of drying shrinkage in its placement when compared to dense concrete. The drying shrinkage development is much sooner in NFC. There are far less cracking hence crack-preventing control joints can be very few and concrete appearance is much better. Depending upon the mix design and placement technique, NFC can develop strength even above (3000lbs/" Squ.Inch) 210 Kg/cm2 which can support moderate loads. It will require properly designed and executed subgrades. We should always remember NFC with high porosity will have lower strength compared to conventional cement concrete.

NFS creates a highly permeable mass with inter connected voids that can drain the water very fast. Hardened mass has a void percentage of 15 to 25% which can provide a water flow rate around 0.34 cm/second.

Use of Recycled Aggregate in Producing NFC

R&D experiments have shown that recycled aggregate produced using CC/RCC debris can successfully be used for producing NFC During research project taken up at structural Engineering Research Centre Ghaziabad in 1990-95, period on recycled aggregate concrete, various grades of concrete was produced using concrete debris collected from various demolition sites in NCR. NFC was also one of the types of concrete produced and tested. A test strip was also constructed behind the Material science Lab at SERC (G). During this experimental study short columns (pedestals) cast using NFC were jacketed using ferrocement lining and tested. The results confirmed usefulness of NFC for temporary pedestal construction for supporting lighter loads in many projects, when these pedestals are needed to be removed the aggregate once again can be recovered and reused. In fact, most of the RMC contains many recycled materials in the form of supplementary cementitious materials like flyash, silica fume etc.

The construction agencies handling NFC need specialization which can be gained only through hands on experience. The material is generally finished with a steel pipe roller which compacts it without sealing pores. A leading RMC manufacturing in NCR is already producing and marketing NFC (Previous Concrete), and demonstrated it in an exhibition at India Expo in Greater Noida organized by Indian concrete Institute during an International symposium between 14th to 10th December 2008. 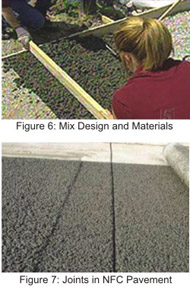 This is not a new technology (as was first used in 1852). NFC is receiving attention by the construction industry because of its several advantages, specially high flow rate of water through its body-allowing rain fall to be captured and to percolate into ground and recharge the falling down ground water table, providing a solution to environment–friendly sensitive construction. This is vital for Indian conditions where Govt. is putting lot of efforts to implement ground water recharging techniques. NFC can extremely be a useful material.