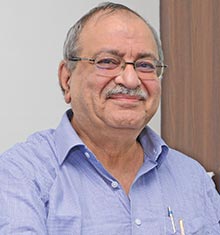 Scarcity of good material often requires flexible pavements to be constructed from marginal materials. Pavements supported on weak soils with low California Bearing Ratio (CBR) would require further engineering beyond the established standardised norms. There are instances where marginal material is required to be used even where the CBR is very low. Such conditions require a paradigm change in the design of the pavement section using geosynthetics.

Geocell to the rescue

At Strata Geosystems, we have used geosynthetics like geocells (StrataWeb®) and geogrid (StrataGrid™) for ground improvement, reinforced soil walls, embankment protection etc. We rehabilitated a damaged stretch of a National Highway NH-44 connecting the North-Eastern states with the rest of the country. It became operational in a record time of 15 days and was acknowledged by the Assam PW (Buildings and NH) Department in the following words: “The NH-44 at Churaibari once infamous for mud and slush is now transformed beautifully, and this has been made possible by the use of Geocell in its construction.”

NH-44 near the Assam-Tripura border traverses forested undulating terrain. The sub-grade is highly plastic, with weak, clayey soil of low permeability. This region experienced very heavy rainfall from March to September 2016 and completely damaged about 500m of the stretch, reducing it to a swamp (Fig.1). Conventional repairs were unsuccessful and traffic disruption created a crisis with commodities becoming scarce and expensive in Tripura.

Strata Geosystems designed the pavement using StrataWeb® geocells within the pavement section (Fig. 2). The CBR was as low as 0.5% and the traffic intensity considered was 20msa. A Modulus Improvement Factor (MIF) of 2 was conservatively considered. Granular material was available within reasonable lead and used as infill, ensuring drainage of ingressed water.

The procedure proved successful. Fig. 3 illustrates heavy vehicular traffic plying the unpaved pavement without distress, notwithstanding the wet conditions. After being paved, the stretch has further withstood the heavy brunt of the 2017 monsoons (Fig. 4).

Geosynthetics are an important facet of geotechnical engineering. Geocells can be utilised for rapid construction of emergency roads as well as roads over difficult subgrades and terrain even where the CBR value of the subgrade may be as low as 1%. Where life cycle costs are concerned, earth structures and pavements with geosynthetic reinforcement score well over conventional designs.