Two types of pavements are laid in India-rigid pavement and flexible pavement. In simple terms, a flexible pavement can be defined as a pavement layer comprising of a mixture of aggregates and bitumen, heated and mixed properly and then laid and compacted on a bed of granular layer. Rigid pavements on the other hand, are made from cement concrete or reinforced concrete slabs, laid over a low strength concrete layer (Dry lean concrete, DLC) or on a well compacted layer of aggregates or both.

Flexible Pavement Cross-section
courtesy: www.theconstructor.org
A typical flexible pavement consists of a bituminous surface course over base course and sub-base course. The surface course may consist of one or more bituminous or Hot Mix Asphalt (HMA) layers. These pavements have negligible flexure strength and hence undergo deformation under the action of loads. The structural capacity of flexible pavements is attained by the combined action of the different layers of the pavement. The load from trucks is directly applied on the wearing course, and it gets dispersed (in the form of a truncated cone) with depth in the base, sub base, and subgrade courses, and then ultimately to the ground. Since the stress induced by traffic loading is highest at the top, the surface layer has maximum stiffness (measured by resilient modulus) and contributes the most to pavement strength. The layers below have lesser stiffness but are equally important in the pavement composition. The subgrade layer is responsible for transferring the load from the above layers to the ground. Flexible pavements are designed in such a way that the load that reaches the subgrade does not exceed the bearing capacity of the subgrade soil. Consequently, the thicknesses of the layers above the subgrade vary depending upon strength of soil affecting the cost of a pavement to be constructed. 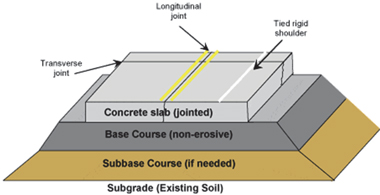 Rigid Pavement Cross-Section
courtesy: www.theconstructor.org
Rigid pavements are named so because of the high flexural rigidity of the concrete slab and hence the pavement structure deflects very little under loading due to the high modulus of elasticity of their surface course. The concrete slab is capable of distributing the traffic load into a large area with small depth which minimizes the need for a number of layers to help reduce the stress. The most common type of rigid pavement consists of dowel bars and tie bars. Dowel bars are short steel bars that provide a mechanical connection between slabs without restricting horizontal joint movement. Tie bars on the other hand, are either deformed steel bars or connectors used to hold the faces of abutting slabs in contact. Although they may provide some minimal amount of load transfer, they are not designed to act as load transfer devices and are simply used to ‘tie’ the two concrete slabs together.

The design of pavement varies with soil conditions and the amount of traffic expected to be carried during its design life. Flexible pavements in India are designed based on California bearing ratio (CBR) of subgrade soil and expected number of cumulated axles (measured in million standard axles, msa) during the design life of the pavement. These pavements are designed for a period of 15 years. The method of design allows use of conventional as well as stabilized materials in any layer of the pavement, and thickness of each layer is taken from the templates given in Indian Roads Congress (IRC) design code.

Flexible pavements and rigid pavements can be compared on different parameters. Here only two parameters are considered: cost of construction and carbon footprints.

Comparison Based on Cost

A typical section of two-lane road with 7.0 m carriageway and 1.5 m wide shoulders on either side is considered. A length of one kilometer is considered for computation of the cost. Two types of pavements were designed for different types of soil subgrade (CBR ranging from 2 percent to 10 percent) and design traffic (1 msa to 150 msa), and the cost of each layer is computed using Dehradun PWD schedule of rates. Therefore, a total of 90 pavements were designed and the costs of construction and maintenance were computed. The above ranges of soil and traffic values are assumed to cover almost all possible combinations of soil CBR and traffic loadings.

The cost of Rigid Pavement is also computed and the total cost of construction and maintenance for different soil and traffic conditions is shown in Table 2. Eq. 2 relates cost with CBR and traffic.

Comparison Based on Carbon Foot print

Another comparison between flexible and rigid pavements could be in terms of carbon foot prints spent during construction. Road construction consumes energy in following five phases.Let us take a case study of pavement design for soil subgrade CBR of 8 % and traffic loading of 100 msa. The design of two pavements is shown in the chart 1. 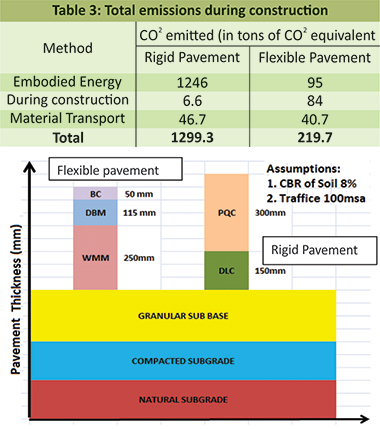 Chart 1:
Note: WMM = Wet Mix Macadam; DBM= Dense Bituminous Macadam; BC = Bituminous Concrete; DLC = Dry Lean Concrete; PQC = Pavement Quality Concrete
The total emissions during construction of one kilometer long road with flexible pavement and rigid pavement are given in Table 3. Author could not get data on maintenance and demolition part of the road and therefore comparison is made based on first three operations only.

The green house gas emissions during construction of two types of pavements are shown in Chart 1. All calculations are made for one kilometer road length with 7.0 m wide carriageway.

Major highways constructed in the world are of bituminous surfacing. For example, 86 percent of rural highways and 78 percent of urban roads in the U.S. are of flexible type. Most of the runways in the world have flexible pavements, Autobahn in Germany is also with flexible pavement. However, the choice of type of a pavement is governed by the type of traffic and soil conditions. In case of areas where soil subgrade is weak (like clay) and drainage conditions are also difficult to maintain at desired level of performance (like in urban areas or in situations where road passes through habitation), rigid pavement can be a good choice. But when soil subgrade is of good quality and traffic is also not very heavy, flexible pavements can be more economical. The biggest advantage with flexible pavement is that they can be made in stages. The economic analysis done by an expert committee for the upcoming Nagpur – Mumbai Access controlled Expressway also indicated that if stage construction is adopted, then flexible pavement will be much cheaper than rigid pavement.