Causes and Prevention of Structural Failures

The design of structures should satisfy three fundamental requirements:Stability, strength and serviceability can only be achieved by following basic design principles. This paper presents different structural failures, so other engineers can benefit from this knowledge.

Part of a building in Vijayawada collapsed one early morning killing a person. On inspection, it was found that the collapsed part was constructed adjacent to the main building with 25mm expansion joint. The collapsed building was constructed on two columns. Each column has 6-16mm main steel. Load from each column is transferred to a single under reamed pile. Which has 6-10mm bars.
It appears that the collapse is due to three causes:The collapse of the building could have been prevented by structurally connecting it to main building there by providing stability.

A Footbridge in Vijayawada collapsed one day before opening & fell into the canal below killing two painters. The footbridge has a span of 40m. It consisted of two welded trusses, cross girders & precast RCC slabs. On inspection, it was found that the welding is defective.

Following the provisions in IS code for structural steel fabrication would have prevented this failure.

Collapse of a Residential Building

One evening in Vijayawada, a three story residential building (Fig 2.) collapsed a day before occupancy killing watchman & his family.
On inspection, it was found that one of the building columns was constructed on filled up well. The old well is filled with sand and an Isolated footing was constructed on the well. As the construction progressed, load on column increased. The foundation has settled, leading to the failure of the building.

Isolated footing is a wrong choice for the foundation on the old well. For that column a well foundation should have been a better choice.

Owner of a college building complained that a floor slab in one of the rooms is vibrating, when students were walking or jumping on the slab. On inspection, no structural cracks were found in the slab. The size of the slab is 8m X 9m and it is supported on four sides by beams. It is continuous on three sides. The thickness of slab was 150mm. It appears that deflection check was not done in the slab design.


Generally, slab thickness is calculated based on deflection criteria. A proper design of slab may have given a safe design. The slab had failed in deflection check, however it is safe in flexure.

Structural Cracks in the Slab

A dining hall of size 18m X 48m (Fig 3.) was constructed with two bays in east west direction and six bays in north south direction. Size of each slab is 8m X 9m and the slabs were designed as two way slabs. 1mm wide cracks developed in the slab at the location of maximum negative bending moment.

On inspection, it was found that the structural design was correct. Non-destructive tests revealed that concrete had required compressive strength. Thickness of slab was adequate from consideration of flexure & deflection. On further investigation, it was found that the top reinforcement has a clear cover of 130mm instead of 20mm. since the top steel is placed close to neutral axis, it became ineffective in carrying negative bending moment and hence the slab cracked at all the supports.
It is apparent that the rod bender fabricated the steel for 150mm thick slab and the site engineer did not understand the importance of top steel bars.
The slab became two way simply supported slab instead of two way continuous slab. The dining hall is still functional. But before another floor is added the slab should be checked.

Inspection of steel by structural engineering before placing concrete would have prevented this failure.

In one of the college buildings, diagonal cracks were observed in many walls. The cracks pattern did not fit the standard cause of wall cracks. The plan & section of the building are shown in Fig4 and Fig 5. Structural analysis of the building was performed using STAAD pro software. From the analysis results, it was apparent that the frame did not meet the deflection criteria even though the beam has satisfied the deflection criteria. 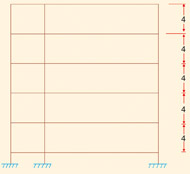 Due to Architectural reasons, the columns were oriented in the frame along minimum moment of Inertia. The excess deflection of beam & column has caused the cracks in brick walls.

Deflection of frame should be checked for safe design.

Various structural failures that have reached limit state of collapse & serviceability were presented. Following are the failures presented here:All of the above failure, may have been avoided by following fundamental concepts of structural design.