But this technologically, economically and environmentally advantageous approach also has its opponents – prevailingly from the contractors’ side due to the inability to create every project unique and so with higher possible mark-up. The objective of this paper is to analyze and appraise the advantages and benefits of the innovative prefabrication approach in contrast to traditional cast-in-place construction method, and to come up with a set of conclusions and recommendations for the general practice The current aging highway infrastructure in Europe in general is being used by increasing volumes of road traffic. For example, the volume of traffic on the most important Czech highway D1 has almost doubled between the years 2010 and 2016. Even though increase in traffic volumes on the rest of European highways is not that high, it is steadily becoming a reality in every country across the world.

Changing the way the public uses personal means of transport is a very complex issue. So far, it has been partly successful for long distance travel as a result of high capital investment in fast train railroads. Lowering the number of passenger cars on highways for the short and mid haul has not been achieved either. Regarding heavy transport, efforts to relieve the overloaded highway network by shifting its volumes to the railroad has mostly failed so far. This is mainly due to the demand on flexibility and speed of supply required by the manufacturing and the retail industry, and due to the various complications that transport companies face while switching from road to track and back.

The European highway network is aging faster than expected. The unexpected high usage and consequent wear of the road infrastructure requires big volumes of repair and reconstruction. Logically, the need for maintenance grows proportionally to increasing usage of roads. At the same time, maintenance must be performed on a continuous basis while serving a growing traffic flow with minimal disturbance. Road users demand that refurbishment and new construction are done faster and with limited road closures, traffic congestion, delays and detours.

Analyzing the current capacities of the construction industry in Europe as of March 2017, it was found that they still have not got 80% of their pre-recession volumes [3] to sufficiently meet the demand for investment and maintenance construction services. Public highway administrations are challenged to find ways to build new and more durable routes and to restore the existing ones quickly and with minimal impact on users.

Precast concrete road pavement and bridge construction systems - cast off-site (at a plant nearby or at site) and installed rapidly off the rush hours, not only lower disruptions to the traffic and enhance safety during construction, they also bring unmatched durability to the new roads and bridges (for both substructure and superstructure; tunnels are not addressed in this paper due to their relatively rare occurrence and technical specificity).

Advantages of precasting over cast-in-place

Since its use dating back to the ancient Romans, precast concrete technology has developed considerably - from the composition of the concrete mix (by adding steel to increase tensile strength) to new ways of casting and curing. The main advantages of precast concrete over cast-in-place (placement of pavement or object in-situ) are as follows: Precast pavement panels or bridge elements can be cast and cured in a controlled environment at a precast plant, providing greater control over consistency of the concrete mix, procedures of vibration and proper curing. Precast objects reduce or eliminate curling and air-entrainment problems that are common with conventional concrete paving [4]. Importantly, precast objects are also prestressed during their plant production and post-tensioned during their installation, which is not possible for the cast-in-place.

Prestressing in the plant significantly improves performance (most importantly the tensile strength) by inducing compressive stresses in the panels. This effectively prevents cracking and strengthens them for better onsite manipulation, preventing them from bending and torqueing. This durability cuts maintenance costs over the life of the roadway and user costs through reduced repair cycles.

As proved by the testing project of the Texas Department of Transportation in 2002 [4] and suggested by El-Reedy [5], post-tensioned panels provide the same design life as thicker conventional concrete pavements, using thinner slabs, which means that a 200mm post-tensioned pavement would have the same life as that of a 355mm conventional pavement. Post-tensioning also increases durability by minimizing or even eliminating cracking as it ties the individual panels together, promoting load transfer between the panels. Additionally, post-tensioning not only reduces the required pavement thickness, but also greatly increases durability, lessening or even preventing cracking in the pavement [6]. This increases the life of the pavement with reduced maintenance. 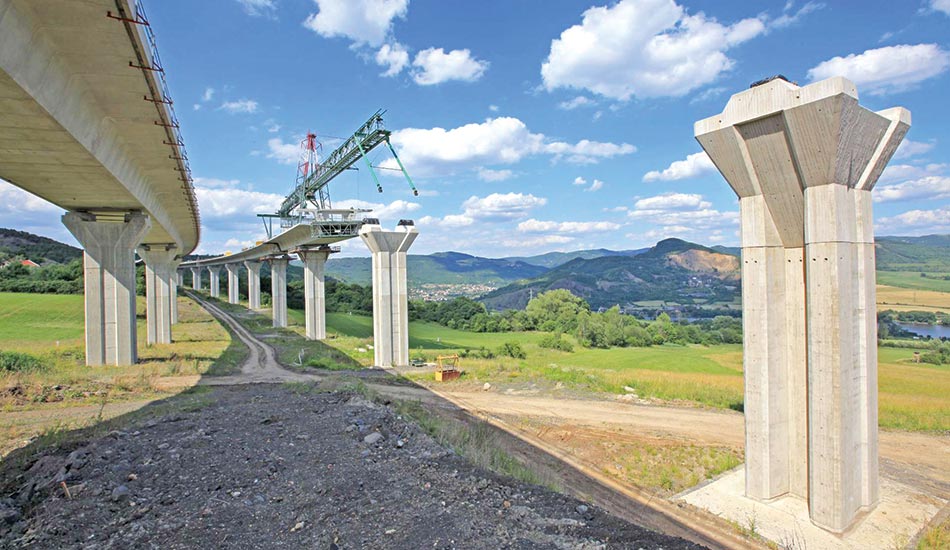 In precast concrete pavement construction, adjacent panels are assembled sequentially and tied together onsite through post-tensioning or cast-in-load transfer systems. Precast concrete pavement systems can be used for single-lane replacements, multiple-lane replacement (an additional lane may be needed to accommodate materials and equipment) or full-width road construction [7]. Using the precast concrete parts for the road’s pavement speeds up the construction time two to three times against the traditional cast-in-place, if well organized. Such a pavement can be used by vehicles the very next day after installation as no further curing of the newly laid road surface is necessary.

Precast technology is applicable for both replacement/rehabilitation of existing bridges and construction of new ones. Accelerated Bridge Construction (ABC) concentrates on the innovative planning, subordinates design to the technology, uses resources and techniques to accelerate bridge construction and maintenance without compromising their safety.

As with the precast pavements, it is mainly about cutting construction time and increasing durability using higher quality factory-made concrete. So, it makes sense to precast most of the bridge elements such as the pile, pier column, pier cap, beam, deck and barrier/railing as well, i.e. all but the column’s footing, which is usually cast-in-place. The construction cost depends on the quantities, which being high, turn the economics in favor of prefabrication, unification and standardization. Regarding user costs, which might easily exceed those of construction if limiting the high traffic areas for a long time, precast is a clear winner.

In a project by the Virginia Department of Transportation in fall 2009, the objective was to rehabilitate a 40-year-old exit ramp from highway I-66 to U.S. no.50 in Virginia, USA, with precast concrete pavement systems. It was a $5 million project to replace distressed pavement slabs in a high-traffic area outside Washington D.C. Conventional repair with cast-in-place concrete would have required about 100 days with traffic congestion from lane closures, but the precast slab approach allowed closure of one lane at a time for about 35 nights of work and made all lanes available for rush-hour traffic. Every night cycle included removal of the existing concrete, preparation and grading of the roadway sub-base, and preparation and placement of the new pavement slabs [7].

Reducing time of the work zones in the moving traffic increases safety for the workers. An average of 85% of deaths in work zones were attributed to drivers and passengers in cars according to the U.S Federal Highway Administration [8]. There were approx. 700 fatal accidents in the work zones in the USA in 2014 and above 200 fatal/non-fatal injuries in the UK [9].

During any road or even lane closure, the general public and particularly, the business sector incur loss of labor hours, lowered comfort, gasoline wastage, and production [10]. So, user costs are not only economic and social, but also of a qualitative and intangible nature [11]. The difference in closure times in precast and cast-in-place construction systems can be as big as days/weeks versus months/years. Unfortunately, many of the European governments’ highway network administrating bodies do not attribute much importance to user costs (inflicted by traffic limitations) due to their relative “invisibility“ compared to the tangible construction costs.

As traffic volumes continue to rise on European highways, users are demanding more comfort and quality. In view of the limited capacities of the construction industry, prefabrication and precasting construction methods seem to offer the right solutions with the following advantages: It is hoped that public demand for quality and comfortable highway travel will make the state highway administrations exploit the potential that the precast prestressed construction method has.