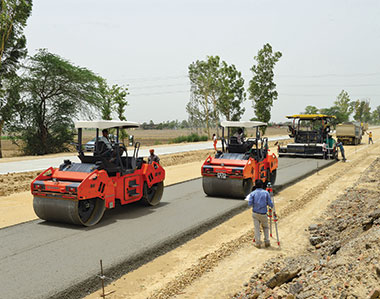 In a master stroke to bridge the physical infrastructure deficit in the road and highway sector, the government has unveiled its biggest ever plan involving Rs.6.92 lakh-crore to construct 83,877 km of roads and highways in the next 5 years.

The plan more ambitious than its earlier NHDP, involves construction of thousands of km of roads, highways, Greenfield expressways, and bridges in phases through economic corridors on manufacturing, feeder routes, coastal and port connectivity of roads across the country to boost economic activity with multiplier impact on the construction and industrial sector.

Interacting with the author on the subject, Dr. Visvesvaraya, the former vice-chancellor, Rourkee University and a national and international project management expert, said that the above plan is appropriately complimented and supported by other recent developments like recapitalization of banks and India getting World Bank stamp on ease of doing business.

While the recapitalization of PSU Banks could spur genuine long-term infra lending to upcoming or stalled mega infra projects, India leapfrogging on the World Bank’s ease of doing business rankings, could pump in fresh fund flow and promote advanced technology transfer to the construction sector, he added.

Economic benefits of the plan

The mega plan has the potential to add 3-4 percent to the GDP growth, provide over 10 million jobs, create ample business opportunities for the construction and allied industries who are likely to see a big demand for new products and services during up streaming and down streaming of activities. The plan will have a profound impact on reducing supply cost to 6 percent from the present levels of 18% as the plan will increase vehicle travelling speed by around 20-25%, thereby, helping reduce logistic costs, thus, impacting exports and trade. Of the $12 billion trade between India and the neighbouring countries, over 65% is via roads investment, disclosed the Transport Minister.

Infrastructure sector has welcomed this mega plan, stating that it will boost the growth of the infra sector, revive economic growth. New projects will take off and many projects stalled for last-mile funding are also likely to see revival.

The entire plan to construct 83,000 km is to be piloted through new umbrella - BMP - for the highway sector that focuses on optimizing efficiency road traffic movement across the country by bridging critical infrastructure gaps. Forming part of BMP is Bharatmala project comprising over 600 projects constructing 34,800 km for Rs.5.34 lakh-crore is almost about two and a half times bigger than the combined length of Golden quadrilateral, East-West and North-South corridors rolled earlier. Under the first phase, to be completed by 2022, 34,800 km of highways are proposed to be built. This will include 24,800 km of the ambitious Bharatmala programme announced two years ago, and 1,837 km of greenfield expressways. Of the 34,000 km stretch, 10,000 km are part of NHDP, which was started in 1998. Apart from this, the project also entails constructing 6,000 km long inter corridors and feeder routes, 2,000 km of border and international connectivity roads, 5,000 km to be upgraded under the National Corridor Efficiency Programme, 2,000 km of coastal and port connectivity roads. Works involving Bharatmala will generate 14 crore mandays of employment, disclosed the Finance Secretary.

Analysts opine that as the first phase (34,8000 km) would have larger length and size of road projects, the per km cost for the entire 84,000 km, on a total cost base of Rs.69,2000 crore works out to about Rs.4--8 crore per km, depending upon land acquisition and building materials cost. This will create big business opportunities for infra companies to post better than expected revenue growth for them in the next two-three years with projects touching 8,000-9,000 km for FY 18 from 5,000 km in 2017. The work on first Bharatmala projects is expected to start by 2018. A slew of measures to ensure expeditious implementation are being initiated. The concerned Minister said that NHAI has been empowered to appraise, approve, and bid out project worth upto Rs.2,000 crore. This will be a good development for EPC players as the funding is by the government and the infra companies would only need working capital, which the banks would be lending comfortably. Infra companies have already been benefitted through HAM model which has reduced the equity burden on the infra companies and has acted as a good trade off, spreading the risk between the infra companies and the government resulting in a win -win situation for the both. NHAI disclosed that it is to offer more than 20 HAM based road projects in next few months. This has attracted the attention of road construction companies like IRB Infra and others who would be preferring this model vis-à-vis BoT model, said IRB Infra chairman. Companies like NCC, L&T, Ashoka Buildcon, Sadbhav Engineering, are gearing up their market strategies to participate in the upcoming road projects once Bharatmala projects are rolled out, said their spokespersons.

The above developments will have a positive impact on the construction equipment (CE) sector which is passing through tough times with paltry 5 percent growth during 2017. As construction equipment manufacturing sector relies heavily on activities related to infrastructure building, which includes everything from construction of roads and highways to real estate, housing, mining, irrigation, railways, metro rails, ports and airports etc, there will be heavy demand of CE products and services. With developments taking place at a faster rate than the requirements, the CE sector could reach the peak attained during 2011 in terms of volume and revenue. It is indeed to the credit of the CE sector that despite passing through a long spell of slowdown, it continued to fine tune its operations, invest a large amount in developing and launching new products and services supported by efficient after-sales measures.

“Growth in infra is expected to be back with a bang, especially with government current focus on the sector. We are looking at a 30% growth in sales of CE over the last fiscal, said the former President of the Indian Construction. Equipment Manufacturing Association (ICEMA) speaking on the side lines of the CII-Excon 2017 road show at Kolkata. While the initial disruption caused by slowdown and GST regime are settling down and CE financing companies have witnessed a 25% month-on-month growth in disbursements, the CE sector with strong technical and managerial fundamentals is bound to make a mark nationally and globally, provided its ongoing problems as related to GST are addressed comprehensively, he added. On discussing certain facts and figures, Vipin Sondhi, Managing Director & CEO, JCB India, said, by and large, the CE sector has been attracting 18% duty and the move to impose 28% would be a heavy burden not only on the sector but also on the users as well as on the government, which is an important beneficiary of CE products, and services deployed on infra projects need to be looked into for the benefit of both industry and as well as the end-users.

The need of the hour is to situate GST Tax calibration in sync with country’s infrastructure development plans in line with industry feedback for the collateral benefit of all.
Click Here
To Know More or to Contact the Manufacturer