RERA: Law of the Land?

It is nearly a year since the Indian realty entered a new paradigm with the on-set of nationwide implementation of the Real Estate (Regulation and Development) Act, 2016 (RERA). As the ﬁrst anniversary of RERA draws closer, so does the knowledge that the implementation across states is nowhere close to its goal. While the state-level dilution of the Act on aspects like deﬁnition of ongoing projects and punishment for violations is well observed, in this white paper we have delved into the establishment of the RERA machinery across the country. Taking stock of the current scenario, some issues have come to light that are vital for the implementation of RERA in the true letter and spirit of the Act.

A LOT of ground to be covered!

Real estate is a state subject and the central government formulated Act is a model Act, which is then re-drawn and adopted by the states. Since 1st May 2016, when the central law came into effect with 60 out of 92 sections, a complete one year time until implementation was available at the disposal of states for establishment of the RERA machinery. Subsequently, the remaining 32 sections came into force on May 1, 2017.

Further, 3 months (1st May 2017 to 31st July 2017) were provided to promoters for registration of on-going projects. In the past one year, RERA compliance in some markets has been a prominent factor for price rationalisation in the residential segment as it has put a break on pre-sales activities and fund mobilisation by developers at the once popular “soft launch” stage. There have been instances where developers have resorted to selling inventory at a marked discount in a bid to raise ﬁnances as no sales at pre-launch stage are allowed now. New supply in the residential segment has also taken a massive hit as RERA compliance and mounting unsold inventory pressures have forced developers to curtail launches. In 2017, new residential supply across the top eight Indian cities (Ahmedabad, Bengaluru, Chennai, Hyderabad, Kolkata, Mumbai, NCR, and Pune) plunged by 41% over 2016. NCR was the worst hit market where a 56% annual drop was noted. However, the progress on RERA compliance across the country still presents a gloomy picture.

Facts at a glance


Most states and Union Territories (UTs) have followed a quasi-implementation route which does not amount to creation of an effective regulator that has started delivering on its intent. Maharashtra is the only exception where the regulator's proactive functioning has set new precedents every second day. Currently, more than 25,000 projects have been registered under RERA across India, out of which 62% are in Maharashtra alone.


Most states and Union Territories (UTs) have followed a quasi-implementation route which does not amount to creation of an effective regulator that has started delivering on its intent. Maharashtra is the only exception where the regulator's proactive functioning has set new precedents every second day.

Currently, more than 25,000 projects have been registered under RERA across India, out of which 62% are in Maharashtra alone. But in some states, extension of deadlines for project registration is still underway. For instance, in Goa, the deadline was extended till February 2018. The delay caused in registering projects also restricts the information that can be supplied to consumers via functional portals. At present, only 19 states and UTs have a functional portal in place, that too with a lot of information dissymmetry across data points. In Andhra Pradesh, only two projects are registered under RERA. Haryana still does not have a portal, and the status of projects registered manually remains unknown.

Similarly, while the number of live projects in Bengaluru alone stands at around 1,300, the total number of projects registered for the entire state of Karnataka is only 1,500. The progress on establishment of a Real Estate Appellate Tribunal is far more disappointing with only 15 out of the 35 (states and UTs) having made progress on this parameter.

Permanent Regulator in 25 states yet to see light of the day!


While the Central act permitted states to designate any regulatory authority as the Real Estate Regulatory Authority, it did not deﬁne any timeline when such an “Interim” Regulator should cease to exist. In addition, since the interim regulators are only “designated” as a Real Estate Authority, it is only an additional responsibility for them to implement the rules and regulations as per RERA. Hence, their efforts fall short of the intended goal of a dedicated real estate regulator. 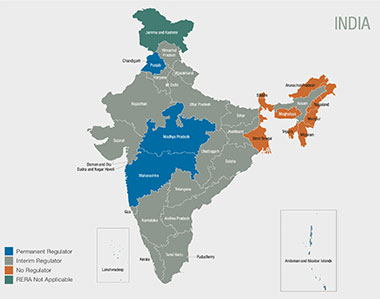 Sections 20 to 39 of the Central RERA outlining the process for setting up a Real Estate Regulatory Authority came in force two years ago, but only 3 states (Maharashtra, Madhya Pradesh, and Punjab) have established a permanent one so far. The devil, as we know, is in the detail. Firstly, while the Central act permitted states to designate any regulatory authority as the Real Estate Regulatory Authority, it did not deﬁne any timeline when such an “Interim” Regulator should cease to exist. Secondly, since the interim regulators are only “designated” as a Real Estate Authority, it is only an additional responsibility for them to implement the rules and regulations as per RERA. Hence, their efforts fall short of the intended goal of a dedicated real estate regulator. From the consumers' perspective, RERA implementation and compliance needs undivided attention and focus from regulators for smooth operations.

Sadly, most states have been playing the waiting game about getting a Permanent Regulator after handing over the reins to such “Interim” authorities. What was strictly supposed to be a stopgap arrangement has turned into a standard. Such authorities are making half-hearted attempts as evident by progress on even basic parameters like getting the portals up and running, registering projects and agents. Since the Central RERA also stipulates transfer of all applications, complaints or pending cases to Permanent Regulators, the “Interim” regulators seem to let the grass grow under its feet.

At present, 25 Indian states are yet to establish Permanent Real Estate Regulators.

The actual functions of a permanent real estate regulator are to facilitate the growth and promotion of a healthy, transparent and competitive real estate market. These include making recommendations to the government on measures to (i) encourage investments in real estate (ii) creation of a single window approval system (iii) encourage grading of projects on various development parameters as well as grading of promoters and (iv) measures to facilitate digitisation of land records.

Dispute conciliation between promoters and buyers is only one of the functions. But most states are far away from the whole nine yards. Until the permanent regulators are off the ground, the shift to an organised real estate market would be difﬁcult. If the regulators don't evolve into institutions with the necessary experience in understanding the ground level challenges faced by participants, they cannot be their eyes and ears to represent their interests.

Table 2: What are the disadvantages if the Interim Real Estate Regulators continue to operate? RERA judgments reinstating consumer conﬁdence

Recent judgments by MahaRERA have been successful in restoring buyer sentiment in under construction projects and addressing intricacies of the construction development process. Some judgments have been delivered within 30 days of complaint ﬁling. Since its constitution, MahaRERA has ruled in over 1000 cases with the ﬁrst ruling coming in September 2017.
By resolving cases on merit basis, MahaRERA is able to meet consumers' expectations of a fast-tracked redressal mechanism and bring about a change in the attitude of real estate developers towards consumers. Karnataka has also started moving in a similar direction with prompt rulings in 63 cases. In Haryana, a private builder was recently ﬁned with INR 3 million for wrongfully advertising an unregistered residential project. However, consumers still continue shopping around at multiple forums to ﬁle grievances until the issue gets resolved as an effective regulator does not exist in all states.


The scope of functions of the newly created Central Advisory Council (CAC) should be broadened to include advisory to state bodies on issues related to RERA compliance. It should hand hold state governments to create support infrastructure.

Dilution of the Central RERA presents a report card which is a picture of despair. Despite positive economic sentiment, the conﬁdence of buyers is still not back. In our view, the following recommendations might salvage the Centre's vision and help RERA meet its desired objectives:
Land being a state subject, “One Nation, One RERA” is only wishful thinking. However, given the impactful stature of MahaRERA after an eventful ﬁrst year, the new eco- system hence created has made the process transparent for buyers.

Other states struggling to implement RERA can learn from Maharashtra's strategy and replicate its success to bring the buyers back to under construction projects.

© Knigh t Frank Indi a Pvt . Ltd.
This report is published for general information only and not to be relied upon in anyway. Although high standards have been used in the preparation of the information analysis, views and projections presented in the report, no responsibility or liability whatsoever can be accepted by Knight Frank for any loss or damage resultant from any use of, reliance on or reference to the contents of this document.

As a general report this material does not necessarily represent the view of Knight Frank in relation to particular properties or projects. Reproduction of this report in whole or in part is not allowed without prior written approval of Knight Frank to the form and content within which it appears.