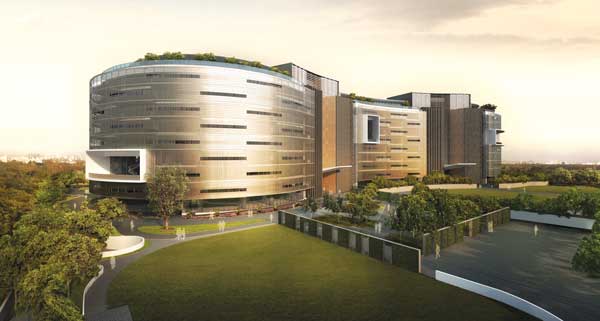 Anshuman Magazine, CMD, CBRE South Asia Pvt. Ltd.
Investment-grade office space demand slowed down in the first quarter of 2014, with around 6.3 million sqft of Grade A office space getting absorbed across leading cities of the country. Transaction activity was dominated by the National Capital Region (NCR), Bangalore and Chennai. Special Economic Zone (SEZ) developments in Gurgaon, Bangalore, Hyderabad and Pune also saw traction during Q1 2014. The market saw slow transaction activity and a low level of new completions in the first quarter; and leading cities continued to experience caution from corporate occupiers in the first three months of the year. Most investments by PE groups in the sector during the period were structured debt deals, with a preference for residential projects or well-leased commercial projects. Land and/or development sites for residential and mixed-use projects in the peripheral locations of leading cities also attracted investor attention.

Since business sentiment had recovered slightly towards the end of 2013, it is expected to improve further following the General Elections results. Market demand is likely to pick up gradually. Occupiers will remain focused on optimal space utilization and cost savings. Peripheral and decentralized locations such as the NCR's Gurgaon and Bangalore's Whitefield will continue to experience strong demand. Office space occupiers from selected sectors such as IT/ITeS will cautiously expand, but only in small to medium sized spaces. Larger size requirements will likely remain limited to a few back-office expansions and consolidations alone.

Occupiers in the IT/ITeS, financial services, engineering, manufacturing, telecommunications and pharmaceuticals sectors will drive office demand. Back office space will continue to see high demand, while front office take-up will remain comparatively limited. The bulk of leasing activity will likely take place in peripheral and secondary locations—such as Gurgaon in the NCR, Whitefield and the Outer Ring Road in Bangalore, Lower Parel in Mumbai, and the secondary business districts of Chennai and Hyderabad. Significant supply of fresh office space expected to reach completion in the coming months is likely to push up vacancy levels, however, keeping rental values range bound.

About 6.6 million sq. ft. of office space was completed in the first quarter of 2014. Bangalore led these project completions, followed by Delhi NCR and Mumbai. New supply in 2014 for New Delhi, Mumbai and Bangalore will total 30 million sqft. net floor area (NFA) with another 21 million sqft. NFA in the pipeline for 2015—mostly concentrated in suburban markets. Rents across major micro-markets like Noida (NCR), Whitefield and Hitec City (Hyderabad) are likely to remain stable. With considerable supply lined up in the short to medium term, however, rental values in micro-markets such as the Bandra–Kurla Complex in Mumbai could witness marginal pressures from oversupply concerns. 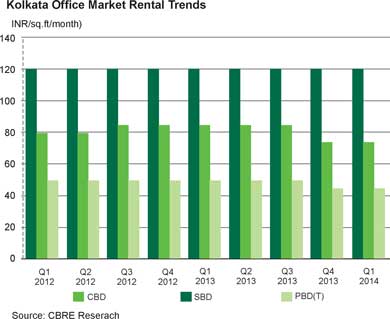 While the Kolkata commercial real estate market attracted reduced demand for office space during the first quarter, enquiry levels from prospective corporate occupiers indicate that office transaction activity is likely to pick up in the coming months. On the supply front, the peripheral locations of the city are likely to witness significant supply addition by the end of 2014; and office space rental values are expected to remain stagnant across most micro-markets of Kolkata in the coming months.

During the first quarter of 2014, Kolkata's Central Business District (CBD) of Chowringhee, B.B.D Bagh, Park Street and Camac Sreet witnessed a low level of commercial leasing activity in the first quarter. On the supply front, around 30,000 sq. ft. of office space was added to the existing stock; resulting into a marginal increase in vacancy levels. Rental values remained largely stable in this micro-market.

The secondary micro-markets of EM Bypass, Kasba–Gariahat, Topsia and Sarat Bose Road saw sluggish transaction activity during the quarter. There was no addition to the office stock in this micro-market; and vacancy levels remained largely stable over the previous quarter.

The peripheral micro-markets of Salt Lake and Rajarhat observed a decrease in demand for office space, with office space absorption recorded at 37,000 sqft. in the first quarter of 2014, as compared to 55,000 sqft. in the previous quarter. There were no significant project completions in this micro-market during Q1 2014. Vacancy levels remained high, and were estimated in the range of 18–20%.

Investment activity in India is expected to pick up during the year, as market sentiment improves with a better economic outlook, following a new political dispensation after the General Elections. The central bank may relax its monetary policy, which could trigger more investments in the sector. The Rupee fluctuation, and the weak economy in 2013, had forced some foreign funds to exit the market. However, several new foreign funds have entered into the market in recent months as financial markets began to stabilize. Blackstone was among the most active private equity players in the country in 2013; while other significant players included the Xander Group and Red Fort Capital.

Oversupply is still a concern in many key markets. Investors will seek to lock in capital in well-leased office assets, including IT parks and SEZs in prominent locations. The price of such assets could either stand firm, or display some growth. Investment may also take the form of structured debt deals.

The introduction of Real Estate Investment Trusts (REITs) in 2014 is expected to be the single most consequential change in the country's investment climate. The fractured political climate before the General Elections, however, may sour the investment climate in the first half of the year.