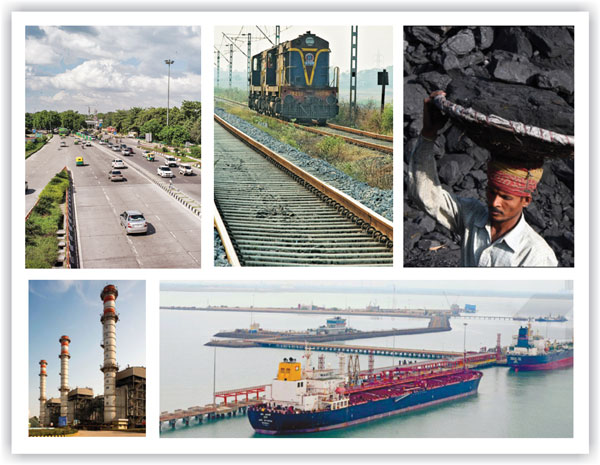 S.K.Khanna
Despite countless hiccups including global economic slowdown, shrinking sentiments and severe cash crunch, the Union government in the past two years has not just been able to bring the infrastructure development on the right track but also maintaining its pace. This was largely due to the multi-pronged initiatives including speeding up of project delivery, streamlining implementation and execution mechanism and changes in the infra developmental models and project award process to kick start the stalled projects.

The last two years have been the best period with visible sign of economic recovery and faster pace of infra development, which is currently quite visible on the ground. The sustained and concerted efforts by the government have led to the resolution of countless issues on stalled projects and initiation of action like one time capital infusion offer to revive projects delayed due to funding shortage. This in fact, triggers positive impact across infra segments including roads and highways, railways, ports, civil aviation, renewable energy and power generation. To upscale the momentum, the PM has assigned targets to key ministries and has also directed them to achieve the assigned task before the end of the financial year. In addition, the targets will regularly be monitored by government think tank—NITI Aayog. This high level intervention came into effect shortly after the Aayog made sector-vise presentation to the PM.

The road sector tops the list as far as its performance is concerned which has no doubt contributed significantly to the turnaround in infrastructure. Two years ago, road and highway projects worth Rs.3.85 lakh crore were in suspended animation mode and were virtually blocked. More than 95% of the projects' issues have been sorted out and as of now, there are only 15-20 projects involving investment worth Rs.25,000 crore remained unresolved. "Till now, we have taken 21 Cabinet decisions, so that projects could be fast tracked, said the road, transport and highways minister. Consequently, the pace of road construction has gone up from 8.5 km a day to 11.9 km in 2014-15, 16.5 km in 2015-16 and is raring to touch about 28 km per day in the month of June this year. The government expects the current pace of construction could go up to 40 km in the next 3-4 years, if the current pace is maintained. The construction of national highway projects award have gone up from 3,500 km in 2013-14 to 8,000 km in 2014-15 and 10,000 km in 2015-16. Government think tank spearheading NITI Aayog has already set an ambitious target of doubling the national highways network by 2019 fiscal. For the current year, the Aayog has set the highway network target at 86,372 km. About 32,500 km of roads have been planned for four- laning by 2020, up from 24,706 km in FY16, and the current year target of 28,182 km. The government is aggressively pushing the hybrid annuity model and increasing build-own - transfer contracts to 27% of the total projects during FY 17 from 15% during FY16." We have already awarded 17 projects under this model and there is a target to award 200 projects on this model", disclosed the road transport minister. As of now, the race for bidding road projects has not only begun but also getting hotter by the day with each project receiving bids from about 10 developers during current fiscal. At the other end, a steady rise in traffic and toll collections recorded by many highway operators has improved investment sentiments in the sector where many companies are looking to monetize operational assets. As the traffic in the country is increasing by 10% per annum, the government has fine tuned its ambitious program of building access control highways. About 15 such expressways have been planned. At the national level a dedicated funding agency for road and highway sector has been set up on the lines of Power Finance Corporation with an initial equity of Rs.500 crore to ensure that road projects do not get crowded by companies from other sectors. For faster development of roads in the NE, a specialized agency—the National Highways and Infrastructure Development Corporation (NHIDCL) has been set up to build roads in tough and rough hilly terrains, including border areas. It has already awarded projects worth Rs.3,799 crore for building highways in Arunachal Pradesh, Assam, and Nagaland. Rural connectivity through rural roads in the last two years has improved. Per day 100 km of roads have been constructed and the target is to build 2.35 lakh km of rural roads by 2019 to connect every small village in the country. With frantic activities being witnessed on construction and development of roads and highways across the country, the last two years have indeed witnessed the sector coming out of crisis and gaining momentum year-on-year basis. Roads and highway sector is one good sector that can impart momentum to country's economic growth, opine experts.

A record 28km of highways is expected to be built each bay in June.

In railways, the average rate of expansion of tracks has risen to 7 kilometres per day during 2015-16 from 4.3 per day during the previous six years. Investment in railways during 2015-16 has been doubled the average during the preceding five years. The government has approved the construction of the first high-speed rail between Ahemdabad and Mumbai, the modernization of 400 major railway stations, the construction of dedicated eastern and western freight corridors of 1,305 km and 1,499 km, respectively, and laying down of 1,875 km of new rail lines. Under the increased focus on rail network, IR has decided to push the pace of laying new tracks to 19 km per day from the current 7.8 km per day which will generate Rs.80,000 crore business avenues. Connectivity of the north-eastern region with rest of India has received particular attention. 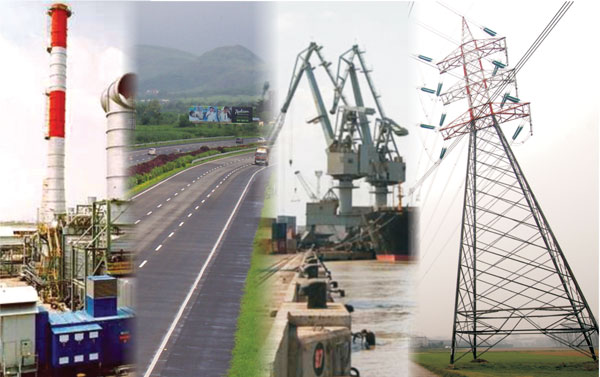 The last two years have witnessed a planned program to develop and expand the capacity of the ports across the country to meet government target to increase port capacity from 1,400 million tons to 3,000 tons. Efficiency at major ports has increased with operating capacity shooting up 43% in 2014-15 over that of 2013-14 and 16.2% in 2015-16. Aimed at modernizing existing ports, the PM launched the Sagarmala project, where there could be an investment of Rs.50,000 crore in port mechanization. The government is backing capacity expansion at major ports by developing connectivity with hinterland by building roads and rail network. Simultaneously, steps are being taken to link inland waterways to various ports to facilitate coastal shipping and ensure last mile connectivity. Under the National Waterways Bill 2015 recently cleared, 106 waterways have been declared national waterways during the last two years compared with just five in the last 30 years.

Two years back, there was crisis in coal production and there was a huge demand supply mismatch. The government took exceptional measures to streamline production and supply of coal. Coal production has now acquired momentum, with the output rising by 32 million tons in 2014-15, against 30 million tons in the previous four years. Growth during 2015-16 is reported to be nine percent higher and short supply situation alleviated.

The government has scaled up electrification drive to electrify every household. The highlight of the progress and achievements of the power sector include electrification of 6,816 villages in the last two years compared with 5,189 villages and 12,000 villages to be covered by May 2018. Outstanding debt of electricity distribution companies (Discoms) has been brought down. The government has launched the Ujwal Discom Assurance Yojana to transfer 75% of the debt to the state budget. Simultaneously, to arrest future distribution losses, the government has launched the Integrated Power Development Scheme. Expansion of transmission lines has been accelerated 30% more in 2014-15 than in 2013-14. Solar power has received a major boost.

Installed capacity until the end of March 2015 was 3.7 Gw. During 2015-16 1.5 Gw was added. The process has gained more momentum recently, with 32 solar parks of 20 Gw capacity approved in 20 states. The Advisory Group of the Niti Aayog will oversee the integration of renewable energy into electricity grid, while the Steering Committee will facilitate the process and report on the progress of implementation.

Funds being spent to modernize infrastructure will be among the top drivers of country's economic growth. However, much depends on how the key infrastructure projects are implemented-- without any cost and time overruns --and money goes where the mouth is! If the execution of these projects is as efficient as it has been in the last two years. The country could attain robust growth in infra development benefitting all - government, infrastructure behemoths, developers and operator in the entire supply chain of the infrastructure sector, manufacturers of heavy engineering equipment, manufacturers of construction equipment and mining machinery and others offering technical services, construction players etc are expected to take a big pie of demand creation thereby adding to their order books.