Demand for construction equipment in India stems from the various infrastructure activities in roads, airports, ports, railways and metros. 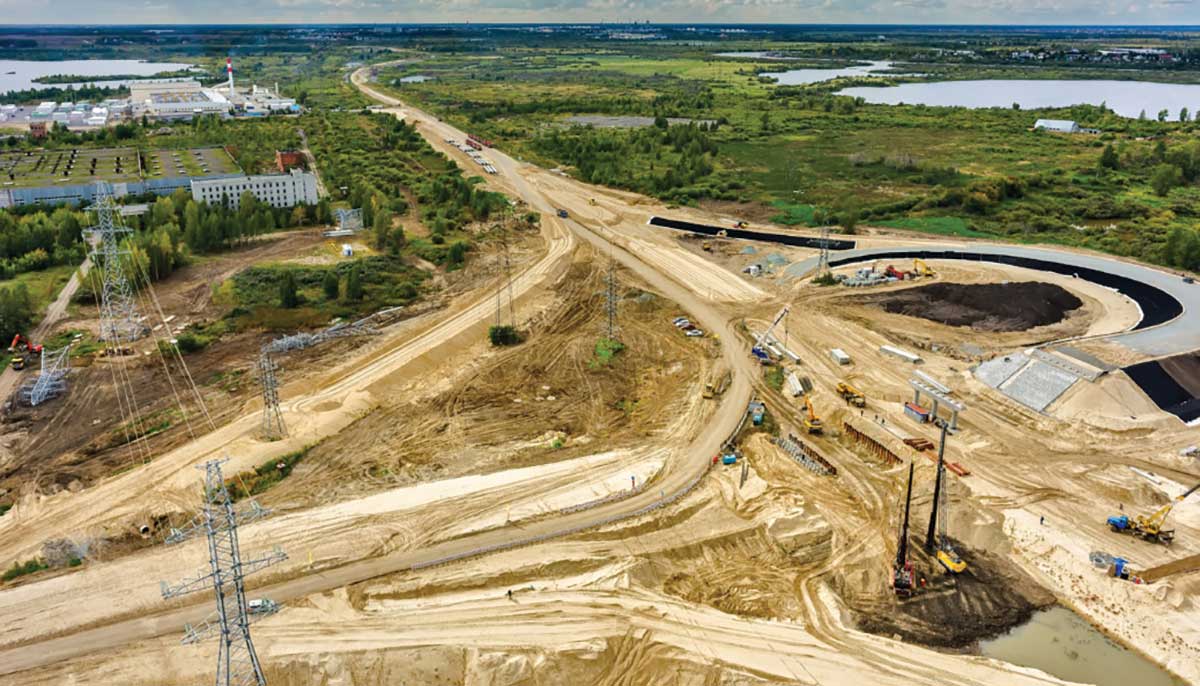 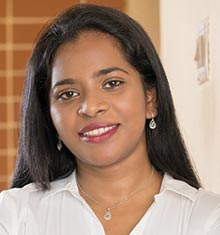 Pavethra Ponniah, Vice President and Sector Head - Corporate Sector Ratings, ICRA Ltd.
For a large part of the current up-cycle which started in CY2016, road work has largely been the biggest demand driver, followed by railways/metro.Notwithstanding the general slowdown in public/private infrastructure work during the election period, the road sector has an adequate pipeline of projects for development/upgradation in national highways and state highways which can keep execution high during CY2019. While real estate and power have also been strong demand drivers in the past, the current outlook on demand from both the sectors is relatively muted.

Demand for CE grew by a robust 24-27% during CY2018, supported by road and railway work throughout the country. Growth stayed strong through the initial 9M of CY2018, barring seasonal lows. However, growth started tapering off in Q4CY2018 and was muted in Q1CY2019, impacted by the NBFC liquidity crisis, and the ensuing elections. ICRA expects demand in the industry to moderate to 4-6% during CY2019, before demand revives.

Roads: Post elections activity to revive
As in the past three years, road construction activity will continue to be the largest driver for construction equipment demand in India, going forward also. Although project awards and construction fell during FY2019 in the run up to the Union elections, urban and rural roads under the Pradhan Mantri Gram Sadak Yojana (PMGSY), doubling of highways and work under the Bharatmala scheme will keep road activity robust. While the strong unexecuted pipeline of roads will support the execution of projects in FY2020, the impact of Union elections and new NHAI norms which impacted the awarding in recent quarters, could temporarily impact execution in FY2021.

Airport: Sizeable investments on the anvil
Strong growth in air traffic over the last few years has resulted in capacity constraints at most of the airports in India; industry-wide capacity utilization for airports stood at 106% in FY2018. As per ICRA’s estimates, passenger traffic would exceed 750 million in a decade, more than two times the existing traffic. To meet the higher traffic load, substantial investment in capacity creation is required.

In the Union Budget 2018, the Government of India announced the NABH-Nirman initiative, aimed at increasing the number of airports and their capacity to handle traffic. The project aims at construction of 100 new airports over the next 10 years, investing ₹2 trillion. This will require increased interests by the private sector as well. With strong capex envisaged, construction equipment demand is expected to increase in airports considerably, going forward.

Ports: Execution under Sagarmala programme is under progress; to benefit over the long term
Under the Sagarmala project, the GoI had set out an ambitious target under four verticals: port modernization (including new port development); port connectivity enhancement; port-linked industrialization and coastal community development for phase-wise implementation over the period 2015 to 2035. Of the initial 700 projects identified for development under the sagarmala scheme, about 577 projects are at various stages of execution. Only about 61 projects have been completed (March 2019) and another 162 projects are in implementation, while the balance are either at tendering or DPR preparation stage. While the scheme has the potential to throw up considerable construction equipment demand, several large projects are still at conceptual/feasibility stage and may still take about 3-5 years to start construction.

Metro and Railways: New metro projects to keep demand strong
Completion of dedicated freight corridors, re-development of railway stations and an expanded pan-India coverage of metro are some of the large infrastructure targets for India over the medium term. Under the National Rail plan 2030, the Indian Railways envisages investment of ₹35,000 billion translating into annual investments of ₹2,500 billion. Capital budgetary allocation to the Railways increased by 17% in Union Budget 2020; while total outlay increased by 7%. Metro work has been a strong driver for equipment demand in recent years. This trend is expected to continue, going forward. 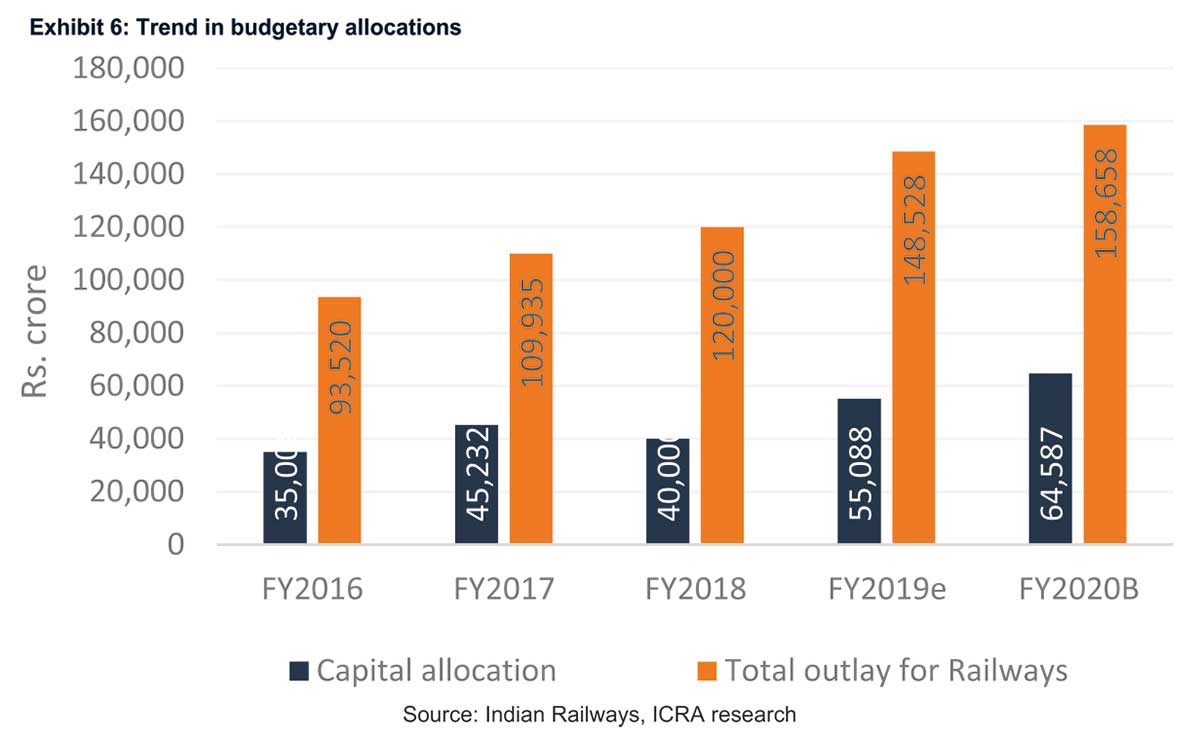 Real Estate: Near term outlook muted
The residential real estate segment continues to go through a prolonged slowdown although listed realty players recorded considerable traction in sales during 9m FY2019, thus improving their market share. Improved sales velocity resulted in increasing pace of project launches; new launches grew by 112% during 9m FY2019. Nevertheless, ICRA’s outlook on the residential real estate market continues to remain negative because of the large inventory overhang and cash flow pressures in the industry. On the other hand, commercial real estate segment continues to do well, aided by stable demand levels and moderate supply growth, which has translated into declining vacancy level and stable rentals across several markets. Overall, construction equipment demand from the real estate sector is expected to remain modest over the near term. 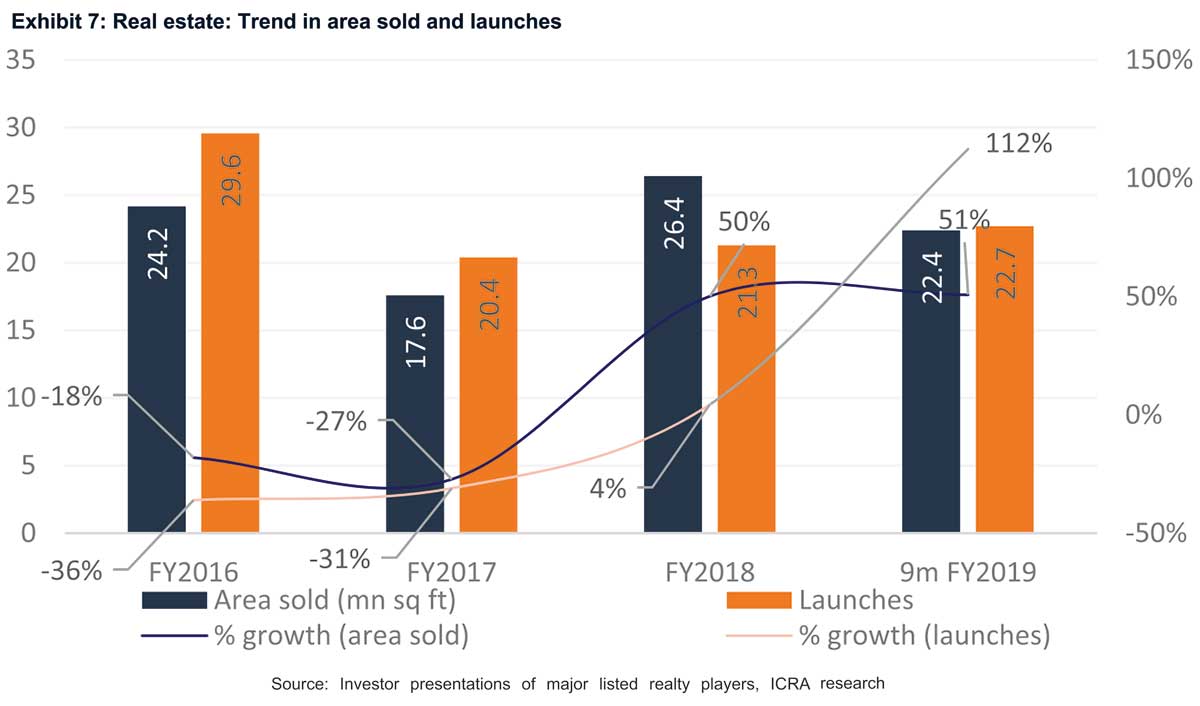 Having faced headwinds with slow pace of highway construction and port modernisation, besides project delays, the infrastructure sector is now set for a major boost in the pre-poll year of 2023, with a major budgetary and policy push from the

As of November 2022, cost of construction has increased by 28% which is higher than the pre-pandemic (November 2019) levels; but continues to be stable compared to March 2022. The costs of key construction materials have jumped 32% in a span of three

Why Investors in India are Pivoting to REITs

Investment, income generation, and wealth creation are the cornerstone for living a purpose-driven and meaningful life. Traditionally, there have been two sources of investment and income generation- Real estate and stock market. In India and in other Asian economies

Despite the severe global headwinds hitting the economy and leading to high inflation, the real estate sector, supported by the progressive government policies, has not only stood its ground, but has displayed remarkable growth. As the sector continues

Buoyed by the growing economic and business base, fast expanding infrastructure and connectivity, Tier 2 and Tier 3 cities are the new growth boosters of real estate. Particularly, post-pandemic, these cities have gained momentum to