With India's aviation market expanding at a fast pace, plans are afoot to increase the number of airports from the current 100 to 200 by 2035; this will open up huge business opportunities for the construction sector.

India has witnessed a six-fold increase in passengers over the past decade due to better connectivity and cheaper fares. Global consultancy and research firm Centre for Asia Pacific Aviation (CAPA) revealed in its recent report that Indian airports handled 265 million passengers in the domestic circle in 2016, which is expected to cross 300 million in 2018. According to the Directorate General of Civil Aviation (DGCA), India is poised to become the world's third-largest market for air passengers by 2025, and it will have 478 million fliers by 2036, requiring an investment of $45 billion. 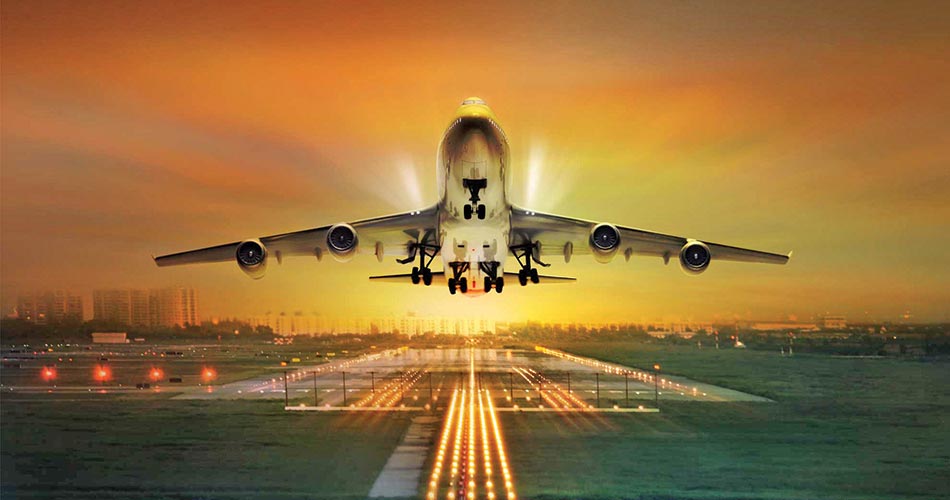 Though the burgeoning middle-class has added to the boom in air travelling, the country lacks the required infrastructure. As reported by CAPA, in the next five to seven years, the top 30-40 airports in India will be performing beyond their capacities.

As of now, 10 airports in India, including Dehradun, Jaipur, Guwahati, Mangalore, Srinagar, and Pune, are operating much beyond their capacity and many more will soon cross their limit.

The aviation body predicts that IGI Airport in New Delhi and the Intl 'Airport in Chennai will reach their capacity in the next five to six years. The situation is likely to become more alarming at the Chhatrapati Shivaji International Airport (CSIA) in Mumbai, which is currently functioning at 94% of its capacity. The airport broke its own world record when it handled 1000 flights both ways, on a single runway, in 24 hours.

Under UDAN, air travel to India's non-metros and remote areas has become more affordable. The concept has been expanding to various states and putting smaller cities and far flung regions on the aviation radar. The Finance Ministry has allocated ₹1,014.09 crore for UDAN.

India has witnessed phenomenal growth of 18 to 20% in the aviation sector in the last three years. The Government has launched a new initiative of NABH Nirman (NextGen Airports for Bharat), wherein systems and processes are being geared up to enhance airport capacity.

The Aviation Ministry has approved 100 new airports which will be built in the next 15 years at an estimated cost of ₹4 lakh crore. Among them, 70 will be at new locations while the rest will involve upgrading and expansion of the existing airstrips. The Aviation Ministry has given approval for new airports at Mopa in Goa, Navi Mumbai, Shirdi and Sindhudurg in Maharashtra, Bijapur, Gulbarga, Hasan and Shimoga in Karnataka, Kannur in Kerala, Pakyong in Sikkim, Karaikal in Puducherry, Dholera in Gujarat, and Bhogapuram in Andhra Pradesh.

The Center has given in-principle approval for the construction of a greenfield airport near Jewar in Gautam Budh Nagar on the outskirts of Delhi. The DPR and the techno-economic feasibility report of the project, prepared by Price Waterhouse Coopers, envisages acquisition of 1,441 hectares of land in eight villages. The project will be built on the PPP model in a phased manner, with an investment of about ₹15,754 crore. The airport will have two runways; capacity to handle 70 million passengers per annum; and a cargo handling capacity of three million metric tons per annum. The Yamuna Expressway Industrial Development Authority (YEIDA) is the nodal agency for this project.

The government has also approved a proposal to build new terminals in the airports of Chennai, Guwahati and Lucknow at a cost of ₹5,082 crore. The new terminal at Chennai airport will have a capacity to handle 35 million passengers per annum and will meet growth requirement till 2027. Stretching across 3,36,000 sqm., it will incorporate green building features for achieving GRIHA-4 Star rating.

The terminal at the Lucknow airport will have an area of 88,000 sq m with a capacity to handle 13.6 million passengers a year and will cater to the growth requirements up to 2030-31 with facilities to handle 2.6 million international and 11 million domestic passengers. The new terminal building at Guwahati airport will have an area of 1,02,500 sqm to handle a combined annual capacity of 9 million passengers and will cater to passenger growth requirements up to 2026-27.

Under the regional connectivity scheme, Uttar Pradesh got 9 out of 25 routes finalized by the Centre. Nine more operational airports will come up in Aligarh, Azamgarh, Bareilly, Chitrakoot, Jhansi, Moradabad, Myurpur (Sonbhadra), Allahabad and Shravasti in 15 months. 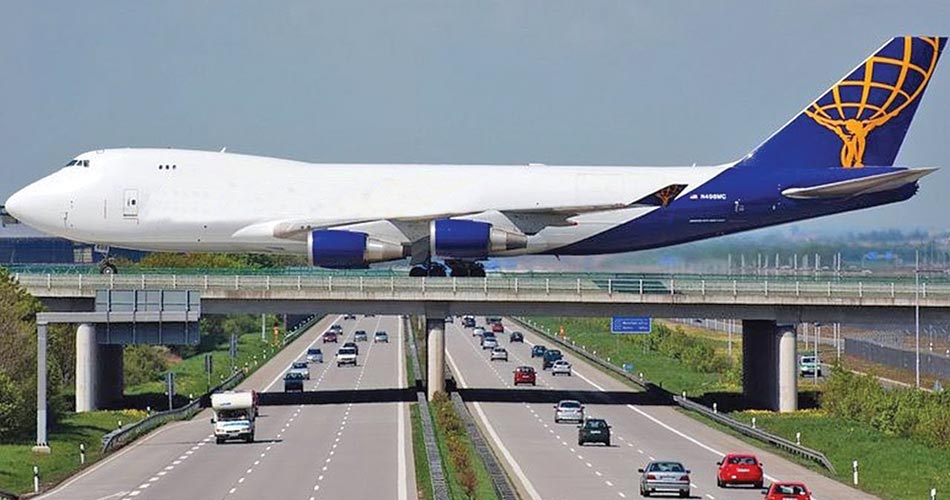 The Lal Bahadur Shastri (LBS) International Airport in Babatpur (26 km from Varanasi), will soon become the country's first airport to have a national highway running below its runway. The underpass will be developed to ensure expansion of the airport's runway for landing of big planes. This was announced by NHAI project director (Varanasi), S B Singh. With the development of the underpass, the issue of deciding the alignment of NH-56, which is being converted into a four-lane road, will be resolved.

In another major development, out of 21 identified national highways (NH), the Indian Air Force has given clearance to 12 NHs to double up as emergency landing airfields. Of these, 3 will connect to Odisha, Jharkhand, and Chhattisgarh - the most Maoist-affected areas and prone to floods and cyclones. The highways will enable rescue teams to reach the affected areas quickly.

In fact, IAF wants the new highways to be built such as to also serve as runways for its warplanes in times of crisis. For the remaining NHs, discussions and tests are currently underway, and are likely to be cleared by the IAF.

The Indian Air Force, after research and identification of locations for roads and portable logistics support, has shaped up its ambitious project of constructing these emergency airstrips in important sectors, in addition to the existing 53 airfields across the country. It may be recalled that in 2015, the IAF had staged a 'Mirage 2000' fighter on the Yamuna Expressway to see if the plan to use highways as runways would work or not, and days later two combat planes landed on an airstrip in Saifai village of Etawah district in Uttar Pradesh. 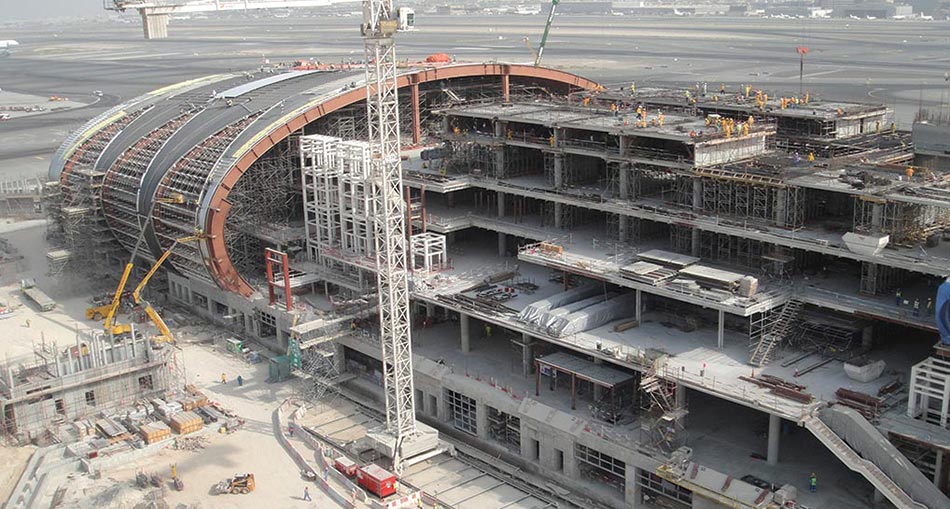 The presence of an airport enhances a city's image as a business destination, thus increasing demand for residential and commercial real estate. A case in point is the upcoming Jewar International Airport in Greater Noida, where Shapoorji Pallonji Construction recently decided to develop a world-class global city. Shortly after that, the Haryana government also announced a Global City to be built in over 1,000 acres in Gurgaon on the outskirts of the IGI airport in Delhi.

Greater commercial activity in a locality leads to higher job generation, resulting in increased demand for commercial property and rental housing. Elsewhere in the country, expecting the arrival of new airports in their areas, real estate developers have started investing heavily around these cities.

In view of the ongoing and upcoming development activities, the outlook for India's construction equipment sector is very positive and its growth set to be incredibly strong in the long-term. As if there is construction, than definitely there would be demand for construction materials and equipment.