Mr. Samir Bansal
General Manager
Off-Highway Research, India
The ongoing bout of slowdown has pushed the construction equipment industry a bit on a slippery slope across the globe. As a result of which the prevailing uncertainties on the global economic horizon forced the governments of major economies to hold over the infrastructure investment adversely impacting the sales of construction equipment worldwide.

As a matter of fact, the construction equipment includes a wide variety of equipment put to use in mining, earthmoving, material handling and others multifarious applications. But this section of the write-up sheds light on the global market scenario of equipment including articulated and rigid dump trucks, asphalt finishers, backhoe loaders, crawler dozer and loaders, crawler and wheeled excavators, mini excavators, motor graders, motor scarpers, skid-steer loaders, and wheeled loaders.

In the midst of repeated economic downturns in the major markets in regions like Western Europe, North America and Japan, the total sales declined by 5 percent in 2008, but a major impact became noticeable in 2009 resulting in contraction of the total industry by 23%. Indian market also dwindled down during the period, but the Chinese market remained unfazed and continued to grow. Global sales of construction equipment improved by 12% in 2010 led by growth in the emerging markets and achieved a new peak of over 1 million units in 2011. Resultantly, on account of weak global sentiment, it is estimated that the industry would again decline by 11% in 2012. All the regions including China are expected to witness a decline in sales except North America, which continues to recover, albeit at a modest rate. 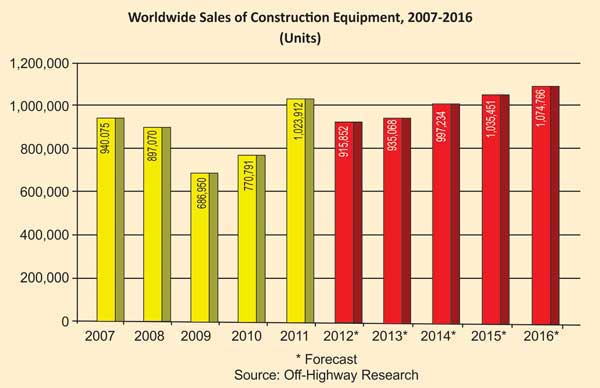 The threadbare study of the regional sales indicate that the share of developed markets of North America, Western Europe and Japan, while the developing economies are gaining share, leading to a new world order in equipment sales and production encouraging manufacturers to shift the production of equipment and components towards the developing world. 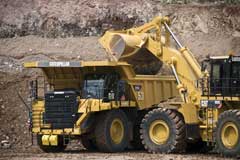 In fact, China, which is the largest single market in the world by a considerable margin, recorded a decline in sales construction equipment for the first time in 2012. It is now challenged by the huge population of new and nearly new machines that exists, and one cannot reasonably expect the same sort of sales growth that took place just a few years ago. In all probabilities, 2011 was the second year of recovery in Western Europe, but the market is estimated to decline in 2012 and is predicted to shrink further in 2013. However, recovery is expected during 2014-2016.

In the aftermath of a sharp fall in 2009 of almost 50% in Japan, caused by stagnation in public works, a dramatic decline in private investment, and problems for rental companies disposing their old fleets, demand bounced back in 2010. It continued to climb back in 2011, but is expected to decline in 2012. Not much optimism is left in this market at the moment, which is expected to remain below 50,000 units in 2016.

In spite of the fact that Indian market will remain much smaller than North America and China, its importance will continue to draw the attentions of construction equipment manufacturers because this market is predicted to grow by over 60% by 2016 compared to the current level. This market is characterised by the dominance of local manufacturers for all the major products, but in some of the equipment, import penetration is reasonably high.

Of the entire range of the major equipment manufactured in the country a majority of equipment and components are destined for domestic market and only a small percentage is exported. Rigid dump trucks are an exception, where exports accounted for over 50% of the production in 2011. Other major contributors to exports in 2011 are backhoe loaders, compaction equipment, mobile compressors and mobile cranes. Total exports accounted for only three percent of local production, however, India is expected to become a regional export hub in future. 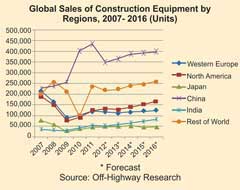 Due to global slowdown, the domestic market briefly declined in 2008 and 2009, but demand for construction equipment increased sharply by 45% in 2010 with sales reaching 54,793 units. This growth trend continued through 2011 as sales peaked at 72,162 units; representing a rise of 22%. Sales of construction equipment is estimated to decline by nine per cent in 2012 to 66,000 units due to sluggish growth in infrastructure and mining.

During 2012, the political and economic climate in the country remained non-conducive to the healthy growth of the infrastructure sector. The growth rate of the Indian economy was 6.5 per cent in the financial year ended March 2012, down from 8.4 per cent achieved in each of the previous two fiscal years. The overall half yearly GDP growth rate for the period ended September 2012 at 5.4 per cent was down from 7.3 per cent in the corresponding period of the previous year. The RBI followed a tight monetary policy during 2011 and 2012 to control inflation which resulted in increase in the cost of borrowings. These along with reduced investment activity contributed to the slowdown in the industrial sector. 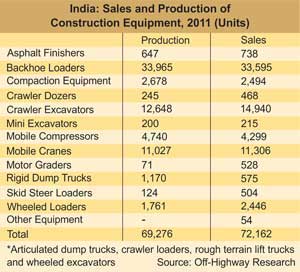 In the first half of the current financial year, the manufacturing sector has declined by 0.4 per cent compared to 5.5 per cent growth during the same period of the previous year. Mining sector growth has also been affected by delays in regulatory and environment clearances. In the first half of 2011, this sector recorded no growth, which turned negative during April–September 2012 with decline of 1.6 per cent. Electricity generation growth during April-September 2012 slowed down to 4.6 per cent as compared to a robust 9.4 per cent increase recorded in the first half of previous year.

The core sector’s infrastructure supportive industries registered a growth of 3.2 per cent during April-September of the current financial year against a growth of five per cent during the corresponding period of the previous year. Due to industrial slowdown affecting tax revenues coupled with higher expenditure on subsidies on fuel and fertilisers, fiscal deficit increased to 5.8 per cent of GDP in the fiscal year ended March 2012 as against an estimated 4.6 per cent. The budget for the financial year ending March 2013 aims at reducing the fiscal deficit to 5.1 per cent of GDP and three per cent by March 2017.

Devaluation of the Indian currency is another concern for the industry as it depreciated by 12.7% against the dollar in the fiscal year ended March 2012 and by another 7.8 percent at the end of September 2012 compared to March 2012. Policy decisions along with administrative and procedural bottlenecks for land acquisition and rehabilitation, statutory approvals and clearances, litigation and long-term funding are the major challenges currently being faced by construction and mining projects in India.

In the long-term, however, the domestic construction equipment market will be driven largely by the planned development of infrastructure and the economic growth of the country under the ongoing 12th Five Year Plan (April 2012-March 2017). The total investment in the 12th Five Year Plan is projected at Rs. 51,464.27 billion compared to Rs. 27,746.57 billion in the 11th five year Plan. As percentage of GDP, the average investment in infrastructure stood at 7.22 per cent of GDP in the 11th Five year plan, while the 12th plan projects it at 9.14 per cent. 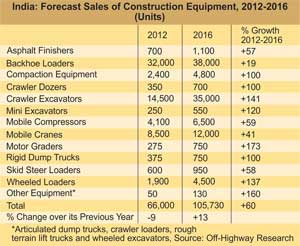 Largely due to the prevailing scenario, the GDP growth rate for the year ending March 2013, is estimated at 5.7-5.9 per cent, the lowest since fiscal ended March 2002. Recently, the government has revised its average GDP growth rate target for the12th Plan to eight per cent compared to 8.2 per cent planned in mid 2012 and nine per cent envisaged in beginning 2012. Further, to control fiscal deficit without cut back on plan expenditure, the government is taking tough measures such as hike in energy prices and reduction in subsidies.

The major factor favoring the growth of the construction equipment industry is the sheer scale of work yet to be done in the infrastructure sector. The increased size of projects and steadily declining availability of manual labor also favor the demand for the mechanization of work at construction sites. Despite the challenges, Off-Highway Research remains bullish about the long-term prospects of the construction equipment market and forecasts it to grow from estimated 66,000 units in 2012 to 105,730 units in 2016.