Designed by Mexican architect L. Benjamin Romano Arquitects (LBRA) and engineered by Arup, ‘Torre Reforma,’ an iconic triangle-shaped tower, the tallest in Mexico, is not only striking in appearance, but also energy-efficient and safe in its performance. This stunning feat of engineering is built (using Reinforced concrete shear walls and coupling beams) to withstand lateral loads, high winds, and the full range of earthquake activity projected for a period of 2,500 years.

Located on Paseo de la Reforma, Mexico City’s most renowned avenues, Torre Reforma is part of a cultural, historical, and financial district. It is a turning point for vertical urban growth in the megalopolis of Mexico City, having a 2,800 m2 ground site, extremely small for a high-rise building of roughly 87,000 m2.

Its shape, derived by the architectural-structural parti, takes into consideration many social, financial and environmental factors. The 57 story building, distinguished by its triangular form, is composed of two 246 meter high exposed concrete walls, resembling the form of an open book, closed by a third glass-façade-metallic diagrid, with a panoramic view to Chapultepec Park. Its façades allow for a versatile column free space and have a great impact on the reduction of energy consumption, shifting from an all-glass façade generation. The existing historical house on site is integrated, forming part of the main lobby. The commercial areas at ground floor and first basement allow for the street activity to unfold into the building. 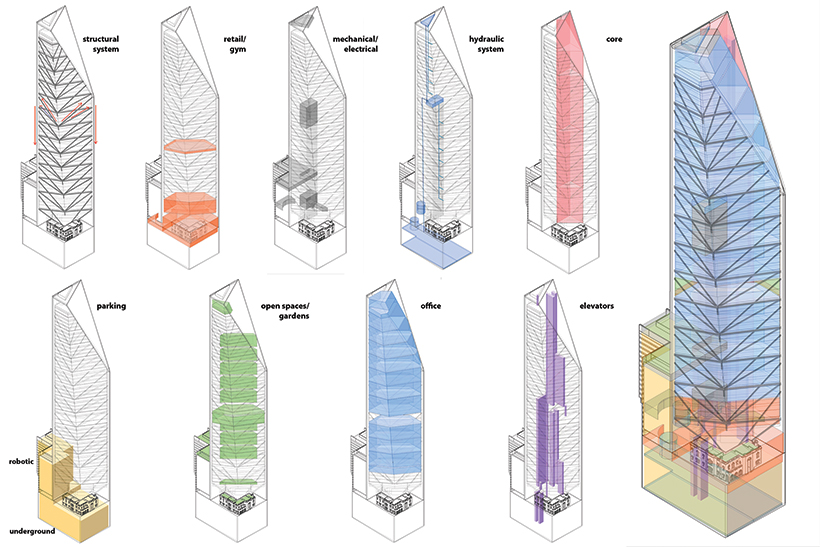 The building has an array of services that includes, sport facilities, open spaces and terraces, bars and restaurants, gardens, auditorium, and common meeting rooms.

In accordance to the actual importance towards mobility, Torre Reforma is very accessible and well connected to the urban infrastructure and services. Its strategic location is surrounded by important avenues such as Paseo de la Reforma, Avenida Insurgentes, the longest avenue in Mexico City, and Circuito Interior, an urban freeway connecting the city’s central neighborhoods. At ground level the sidewalks were expanded and made accessible for all users, giving priority to pedestrians rather than vehicles. The historical house was restored to recover its urban value, serving as a transition from a small scale at pedestrian level to a high rise building scale. The existing infrastructure includes two subway stations, transit buses, and multiple public bicycle stations.

Torre Reforma is one of the leading skyscrapers in a developing area where many others are yet to come. Torre Reforma improved the visual quality of the city’s skyline as well as at street level for pedestrians.

The solid concrete structural and architectural facades are influenced by Pre-Hispanic and colonial Mexican architecture where solid materials (concrete or stone) are predominant.


The building form is a dramatic departure from the traditional all-glass, extruded block high-rise that defines so many skylines around the world. Breaking from this mold has resulted in a versatile, column-free building that incorporates natural energy-reducing elements and a structurally expressive exterior.

The glass façade turns 45 degrees to face the best views of the city as well as slopes 14 meters over the historical house. The allowed height for the building is twice the width of the street in front of the property, in this case, Paseo de la Reforma. However, although there are façade height restrictions, the regulations applicable to the property allowed for a higher density. According to the Mexican norm, an imaginary line is traced at 1.80 meters in height from the opposite side of Paseo de la Reforma, passing through the highest point of the façade. The potential height of the building is the limit of the imaginary line. This allowed Torre Reforma to have 246 meters in height, and have a sloped façade starting at 200 meters in height. 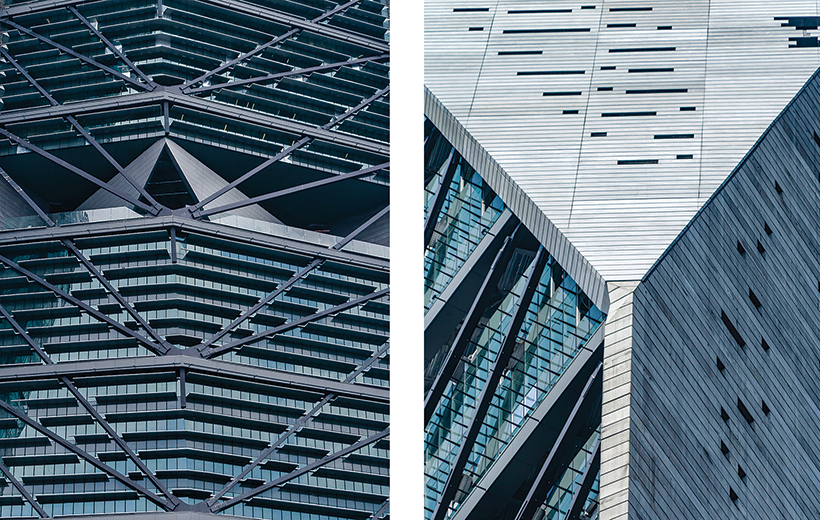 It is organized into 14 four-story clusters, buildings within the building, allowing users to interact on a larger scale with the city to a smaller scale within their workspace. In a city with high seismic activity, the concrete walls were designed to bend due to its openings, repeated every cluster along the tower, providing natural light to interior triple height gardens. These gardens are an extension from the horizontal public space at street level to a vertical axis, creating indoor micro spaces. 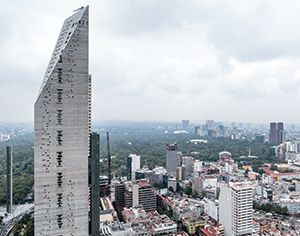 Considering the AIA 2030 Commitment for energy performance, Torre Reforma’s structural efficiency and architectural design has obtained the Platinum USGB precertification. The building envelope generated a great energy performance with a 24% reduction according to ASHRAE. The reduction of energy consumption is due to the façade-structural design: the concrete walls and the double layer glass façade with shades, allowing natural lighting in all office spaces. This drastically benefits the user by providing aesthetic and comfortable interior spaces for better performance.

Rain and waste water is 100% reused in the water treatment plant mainly for bathrooms and the air-conditioning. Water tanks, located along the tower for more effective water system, rely on gravity rather than pump use, particularly in fire emergency.


Torre Reforma is the building with the most elevators (35) in Latin America—are located in the corner, or “apex,” of the triangular plan.


The building is designed to optimize the users flux within the building but also in relation to the city. Within the building, the elevators for Low, Mid, and High Rise are separate in order to optimize the different users but share the same shaft space for efficiency. By an EEES System, elevators can be used during a fire due to pressurized shafts and refugee areas on each floor. The two robotic parking buildings for 400 cars have a low impact on the environment because no toxic fumes are emitted while parking and the space doesn’t need to be lit or ventilated. In order to have the least impact on neighboring streets, the underground parking has a third ramp that can adapt its direction: entrance in the morning and exit in the afternoon.

Forming part of the property is an early twentieth century house that is historically protected. In order for the building to be economically feasible, the house was integrated into the main lobby and the space beneath was used for the foundation underground parking, and services.

As a result, the house was moved. It was reinforced by thickening its walls and pouring a concrete slab underneath it which was placed on top of rails and moved temporarily 18 meters away from its original position. After the foundation was completed, the house was returned to its original position, and the underground levels were dug. The old, damaged limestone has been restored and is currently rented for retail space.