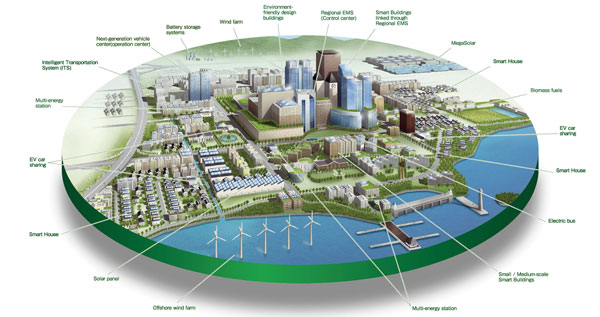 As per the Ministry of Urban Development report, it is estimated that at present 31% i.e. 377 million people are living in urban areas of the country. In the next 15 years, this will increase by another 157 million and by 2050 another 500 million, when more than half of the country's population will be living in urban areas. Since more than 70% of urban people live in 468 cities or towns with more than one lakh population, cities need to be developed in a planned way, catering the requirements of the future hence concept of smart cities has been brought by the government. The government has already announced developing 100 smart cities. It is estimated that 7 lakhcr would be required for developing 100 smart cities in next 20 years but considering inflation rate in the country, the figure may further go up.

Though there is no standard definition of smart city, it is defined as a city that has sustainable development and high quality of life by way of economy, mobility, environment, housing, utilities and governance using information and communication technology. In the national conclave of states and union territories on smart cities held on 12.09.2014, smart city was defined as, "A smart city is one that makes urban life comfortable and improves living standards through good governance, efficient health care services and education, 24 x 7 power and water supply, efficient transport, high quality sanitation, employment to the needy and robust cyber connectivity and benefits all irrespective of income, age and gender" as also mentioned in the draft concept note prepared by the Ministry of Urban Development, Government of India.

A city has its own character of growth. It is supposed to develop according to Master Plan but in actual there are variations particularly in a developing country like India due to high population growth and varied economic conditions of the people. Once city has developed, it tries to switch over to "electronic city". This stage provides for broadband connections to the public and many services are linked to e-governance. We, in India are still to achieve this stage in many small cities, particularly switching over to e-governance and transparent system. After attaining the stage of "electronic city", a city progresses to "mobile city" in which mobile services are introduced with 3G, 4G or improved services. Life becomes mobilised life and learning also starts with mobilised services. After this stage, city moves to "Smart City" having 24x7 services, internet of things, and smart infrastructure with smart services connected through internet and remote controlled. India may not be ready to switch over to this stage hence we need to define "Smart City" in Indian context.