Rethinking the Skyscraper in the Ecological Age: Design Principles for a New High-Rise Vernacular 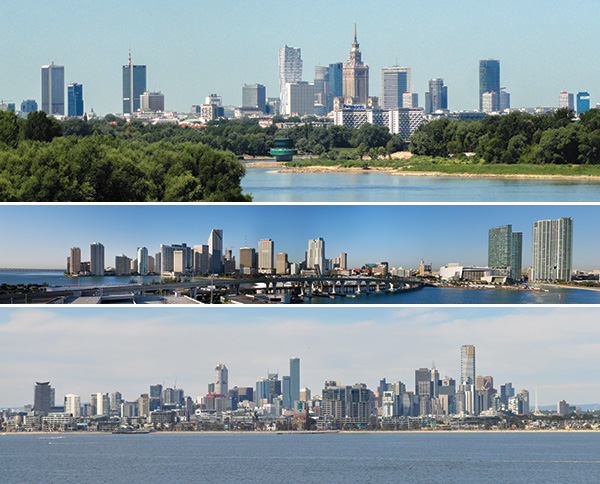 Figure 1: Cities of the world are becoming culturally and aesthetically homogenized, with skylines that becomes synonymous with the place, but are not necessarily related to the culture or climate. Skylines from top: Warsaw, Miami, Melbourne. (Images copyright Filip Bramorski, UpstateNYer, Cazz).

This paper investigates tall buildings from an aesthetic and social, as well as commercial and environmental viewpoints; as contributing elements in the fabric of a city. Against a backdrop of the large-scale homogenization of cities architecturally around the world, the paper suggests ten design principles, that, if adopted in skyscraper design, could result in tall buildings which are more appropriate to the place in which they are located – physically, environmentally, culturally, socially, and economically. In doing this, it promotes the need for a new vernacular for the skyscraper in each region of the world, and suggests this would have significant ecological, as well as social benefits.

Are we there yet?

Though we have seen major advances in the technologies, efficiencies, and performance of tall buildings over the past couple of decades, arguably the urban expression of the typical skyscraper has not changed much from the predominant glass-and-steel aesthetic championed by Modernism in the 1950s. The architectural details have become much more refined since then, and certainly both materials and systems perform much better than a half century ago, but the rectilinear, air-conditioned, glass-skinned box is still the main template for the majority of tall buildings being developed around the world. Many of these boxes vary with how they meet both ground and sky, but they are part of a collective expression.

There is, of course, a smaller group of ever-more adventurous sculptural forms1 that have come to the forefront alongside the more commercially-inclined boxes over the past decade or two (defined by the focus of the CTBUH 2006 Conference as "Tapered, Tilted, Twisted", with a tongue-in-cheek "Tortured" added posthumously – see Wood, 2007). But, in both the "box" and the "sculptural" approach, the relationship between the building and its location is predominantly either a commercial one or a visual one. Thus these buildings are largely divorced from the specifics of the place they inhabit – physically, culturally, environmentally and, often, socially too. For hundreds, and in some cases thousands, of years the vernacular architecture in many of the locations, we are now seeing tall buildings had to be intrinsically tied into its location – for its materials, its ventilation, its ability to function within a given climate and culture – but this was largely rejected in the Modernist belief in a "universal architecture", which transcended mere "context" and worked on a higher philosophical plane.

¹The question of what has inspired this recent diversification of approaches to building form, and whether they can be justified in energy/carbon terms, is a valid one that needs to become a more essential part of the industry’s dialogue. The sustainability discussion in recent years has been focused almost exclusively on operating energy which, while vitally important, has resulted in the neglect of a sufficient discussion of embodied energy in building construction. Even the very definition of "net-zero energy" seems to omit the materials and construction process entirely. Numerous exemplar tall buildings have recently made great strides in the reduction of operating energy. However, the energy expended to create building forms in the first place is by no means constant across buildings, with iconic-sculptural forms clearly requiring more material gymnastics (and hence more carbon) to deliver the same quantity of floor area as a more regular form. But there is another side also to this equation: that of a building’s greater contribution to society beyond delivering maximum floor area with the minimum energy/carbon expenditure. What do iconic-sculptural forms bring to our cities in terms of beauty or impact on urbanity and the human senses? Do we want to live in a world full of ultra-energy-and cost-efficient but rather dull boxes? What about the impact on social sustainability and urban diversity and a whole range of other, less-quantifiable aspects of "sustainability"? Like with all things, there will be an optimal balance point in this equation, but the debate thus far, for obvious reasons, has been focused on quantifiable metrics rather than subjective questions.