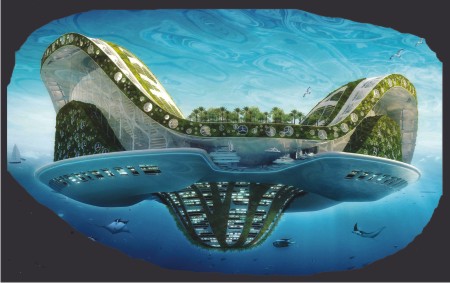 Belgian Architect Vincent Callebaut designed a special accomodation for climate change refugees as experts feels that many island and cities will be lost and completely submerged in the future due to rising tides, reports Mariya Rasheeda.

Considering the alarming forecast of the GIEC (Intergovernmental group on the evolution of the climate) that the ocean level should rise from 20 to 90 cm during the 21st century with a status quo by 50 cm (versus 10 cm in the 20th century), an award winning Belgian architect Vincent Callebaut designed floating cities that would house 50,000 people displaced from the effects of global warming and other ecological disasters. The people would live and work inside these floating cities itself, which will keep floating all the time.

The international scientific scene assets that a temperature elevation of 1°C will lead to a water rising of 1 meter. This increase of 1 m would bring ground losses emerged of approximately 0.05% in Uruguay, 1% in Egypt, 6% in the Netherlands, 17.5% in Bangladesh and up to 80% approximately in the atoll Majuro in Oceania (Marshall and Kiribati islands and step by step the Maldives islands).

If the first meter is not very funny with more than 50 million of people affected in the developing countries, the situation is worse with the second one. Countries like Vietnam, Egypt, Bangladesh, Guyana or Bahamas will see their most inhabited places swamped at each flood and their most fertile fields devastated by the invasion of salt water damaging the local ecosystems. New York, Mumbai, Kolkata, Hô Chi Minh City, Shanghai, Miami, Lagos, Abidjan, Djakarta, Alexandria… not less that 250 million of climatic refugees and 9% of the GDP threatened if we do not build protections related to such a threat. It is the demonstration inflicted to reluctant spirits by a climatological study of the OECD (Organization for Economic Cooperation and Development) and that challenges the imagination of eco-conception! 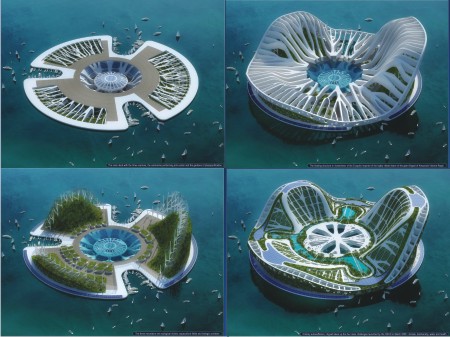 The floating city is named as Lilypad as they are based on the design of a lilypad. According to Mr. Callebaut, “The design of the city is inspired by the shape of the great Amazonia Victoria Regia Lilypad and the goal behind this project is to create a harmonious coexistence of human and nature. The project has double objectives not only to widen sustainability in offshore territories of most developed countries, but also above all to grant the housing of future climatic refugees of the next submerged ultra-marine territories". Major cities including London, New York and Tokyo are seen as being at huge risk from oceans that could rise by as much as three feet by the end of this century, says the futurist in a report.

Lilypad's creator describes the city as a floating ecopolis for climate refuges. The project is a long-term solution to the problem of rising water. It is an amphibious city without any roads and cars and the whole city is covered by plants housed in a suspended garden. A lilypad will float around the world as an independent and fully self-sustainable home. It has a lagoon at its center for soft water collection and purification of rainwater and this artificial lagoon is also entirely immersed, thus ballasting the city. It enables to live in the heart of the subaquatic depths. The multifunctional programming is based on three marinas and three mountains dedicated respectively to work, shops and entertainment. The whole set is covered by a stratum of planted housing in suspended gardens and crossed by a network of streets and alleyways with an organic outline.

Entirely auto-sufficient, Lilypad takes up the four main challenges launched by the OECD (Organization for Economic Cooperation and Development) in March 2008 – climate, biodiversity, water and health. It reached a positive energetic balance with zero carbon emission by the integration of all the renewable energies (solar, thermal and photovoltaic energies, wind energy, hydraulic, tidal power station, osmotic energies, phytopurification, biomass) producing thus more energy than it consumes! A true biotope entirely recyclable, this floating Ecopolis tends towards positive eco-accountancy in oceanic ecosystems by producing and softening itself oxygen and electricity, by recycling the CO2and waste, by purifying and softening biologically used water and by integrating ecological niches, aquaculture fields and biotic corridors on and under its body to meet its own food needs. This means that it will be eco-friendly and will run on renewable energy. It will only float and move about with the currents and movement of the seas themselves. Neither the cost of the building the city nor the cost of living there has been revealed. 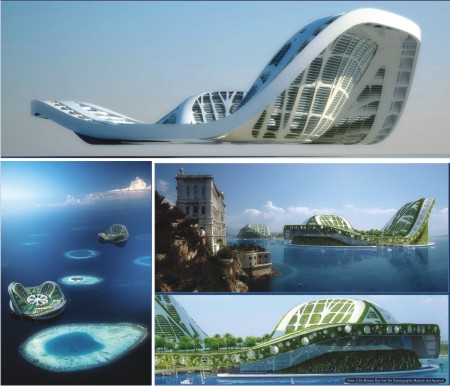 To reply to the mutation of the migratory flows coming from hydroclimatic factors. The lilypad joins on the mode of anticipation particular to Jules Verne’s literature, the alternative possibility of a multicultural floating Ecopolis whose metabolism would be in perfect symbiosis with the cycles of nature. It will be one of the major challenges of the 21st Century to create an international convention inventing new means to accommodate environmental migrants by recognizing their rights and obligations. Political and social challenges apart urban sustainable development must, more than ever, enter in resonance with human sustainable development! 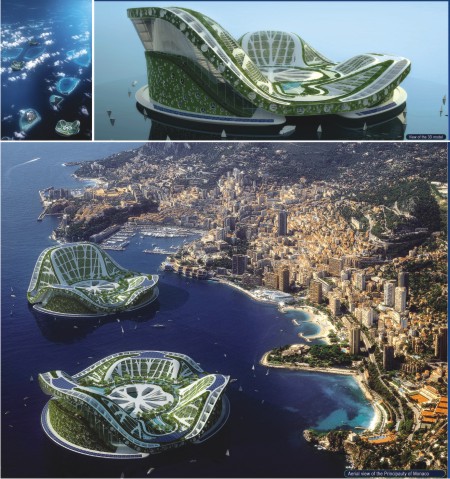